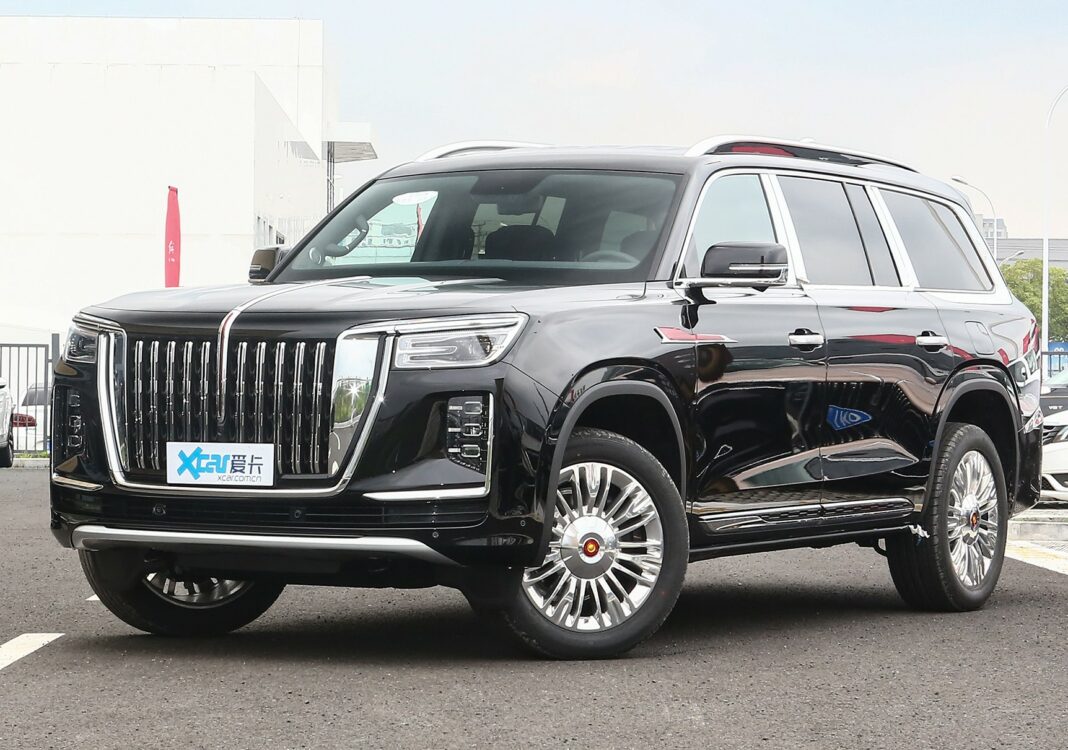 The massive Hongqi LS9 SUV has been launched on the Chinese car market, featuring the best bling in the business, 22 inch wheels as standard, a big V8 engine, a very high price, and… four seats.

Hongqi is a brand under First Auto Works (FAW). Hongqi means ‘red flag’, hence the red ornaments on the grille & bonnet and on the front fenders & doors. Hongqi’s naming system is complicated. They have several series. The H/HS-series are mid-range and low-top range sedans and SUVs (H5, H7, and H9/H9+ sedans, HS5 and HS7 SUVs), the E-series are mid and high range electric sedans and SUVs (E-QM5, E-HS3, E-HS9) and the L/LS-series are high-end cars. And on top of that: Hongqi is currently developing the top end S-series, which will include the upcoming Hongqi S9 super car.

The Hongqi LS7 is one of the largest SUVs in the world. Let’s compare:

Only the Cadillac is longer and only the Ford has a longer wheelbase. But the Cadillac, Ford, and Jeep are all longer variants of existing cars. The Hongqi isn’t. You can only get the LS7 in one size. China being China and Hongqi being Hongqi, I wouldn’t be very surprised if they’d launch an L version sometime in the future.

The design is impressive and in-your-face, clearly a car for those who like to be seen. There are shiny-chromed panels and trim bits everywhere.

The interior is loaded with real leather and wood. It has two 12.3 inch screens, one for the instrument panel and one for the entertainment. There is no screen for the front passenger.

The steering wheel is round and thick, with Hongqi’s ‘Golden Sunflower’ logo in the middle. In the old days, this logo was used on the high-end state limousines. The silver-colored half-circle rim that is the actual horn, this too refers to the past when many luxury cars had a similar horn-control setup.

The Hongqi name engraved in the wood of the doors.

Very nice how they added another Hongqi ornament in the middle of the dials.

Interestingly, the touch screen only has one color option: a black background with gold icons. This too is a reference to earlier times.

And so is this ultra cool ‘display’ of the radio.

The center tunnel connects to the center stack with two gold-colored pillars. The tunnel itself is trimmed in dark wood with silver frames.

Did I mention that the 5.695 meters long car has only four seats? It really does. There are two super wide and super luxurious seats in the back, and nothing else. There is no third row, no middle seat, and no jump seat. The seats can fold into an airplane-style bed, and each passenger has its own 12.8 inch screen for entertainment.

The seats are equipped with functions such as heating, ventilation, and massage. The rear also has a 254-color ambient lighting system.

The two lucky passengers can take a whole lot of shopping bags + crates of baijiu + anything else they need. The space is enormous. Hongqi says a six-seat version will join the lineup soon, but we haven’t seen any images of it yet.

The Hongqi LS7 stands on an old-school ladder chassis. Power comes from a 4.0 liter turbocharged V8 engine with an output of 360 hp and 500 Nm, which is not at all that much considering the car’s size and 3100 kilo curb weight. Transmission is an 8-speed automatic, and the LS7 has four-wheel drive. Hongqi claims a top speed of 200 km/, a 0-100 in 9.1 seconds, and very steep fuel consumption of 16.4 liters per 100 kilometers.

One can’t deny the car’s presence.

Character time: The characters on the left write 中国一车, Zhongguo Yiche, China First Auto. First Auto is an abbreviation of First Auto Works. In the past, many Chinese brands added ‘China’ in front of their brand names, but nowadays it is very rare. Hongqi is probably the only brand that still does this on passenger cars, although it is still quite common for commercial vehicle brands. The characters in the middle write 红旗, Hongqi, in Chinese ‘handwriting’.

Finally, let’s talk about money. The Hongqi LS7 with four seats costs 1,46 million yuan or 215,700 USD, making it by far the most expensive Chinese car on sale today. It is worth it? Well, for the massiveness it sure is. For the impressive looks too. But it seems low on power and a bit low on tech too. But for the LS7 is it really the brand that matters most. Will Hongqi succeed in getting rich Chinese out of their G-Class? Let’s wait and see.