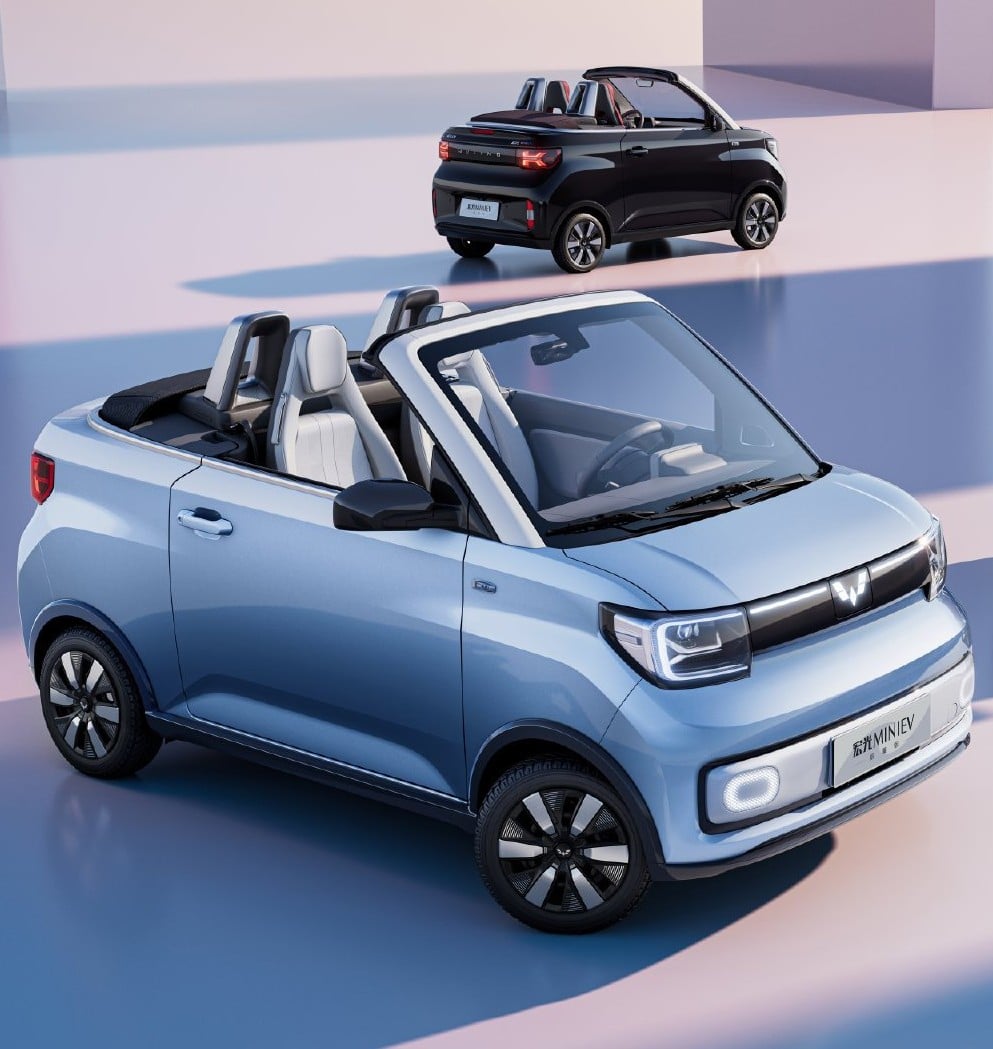 The long awaited Wuling Mini EV Cabrio is finally here. It is probably the coolest Chinese car of the year, and probably of the decade. Wuling deserves a lot of credit for having the guts and vision to bring a car like this to the market.

The Wuling Mini EV Cabrio is aimed at young folks living in sunny places. It has only two seats compared to the four-seat hatchback version. But for losing the extra space you get a convertible soft-top roof that fully stores into the back. Behind the seats are roll bars for extra protection, ad they look cool too. The EV Cabrio comes in only three colors: sea blue, emerald, and modern black. Later on, Wuling will add additional colors.

The A-pillar is painted in matte gray. The convertible roof is standard black or optional red. It is an excellent design, making the change from hatchback to cabriolet without any problem. It almost seems as if the Mini EV was designed as a convertible from the get-go.

Customers can reserve the Cabrio right now or join a lottery to win one. Final pricing hasn’t been announced yet, but estimates are that the Cabrio will be about 10.000 yuan more expensive than the hatchback. This would translate to about 79.800 yuan (11.600 USD). Wuling will likely offer more affordable versions of the Cabrio later on.

The white interior, showing the drive selector, the -/+ pedals, the old-school handbrake, and the steering wheel that stands remarkable flat. Palm trees in the background!

The instrument panel with an image of the Cabrio in the middle.

In China it is still very common for auto makers to pay celebrities to endorse a brand or a certain model. These celebrities figure on advertising and show up on auto shows. To promote the Mini EV Cabrio, Wuling choose Chinese hottie and actress Zhou Ye, aka 周也yeah. Outside of China, she is best known for her role in the Netflix series Word of Honor. Apparently, she likes to carry flowers in her car.

But she doesn’t like to laugh. Hey Ye, you are in a Wuling Mini EV Cabrio. Not happy, no? Smile!

The Cario will launch on the Chinese car market on September 9. By that time we’ll be back with an update on pricing.

And finally, a Mini EV Cabrio mooncake for the upcoming Mid-Autumn Festival (via).