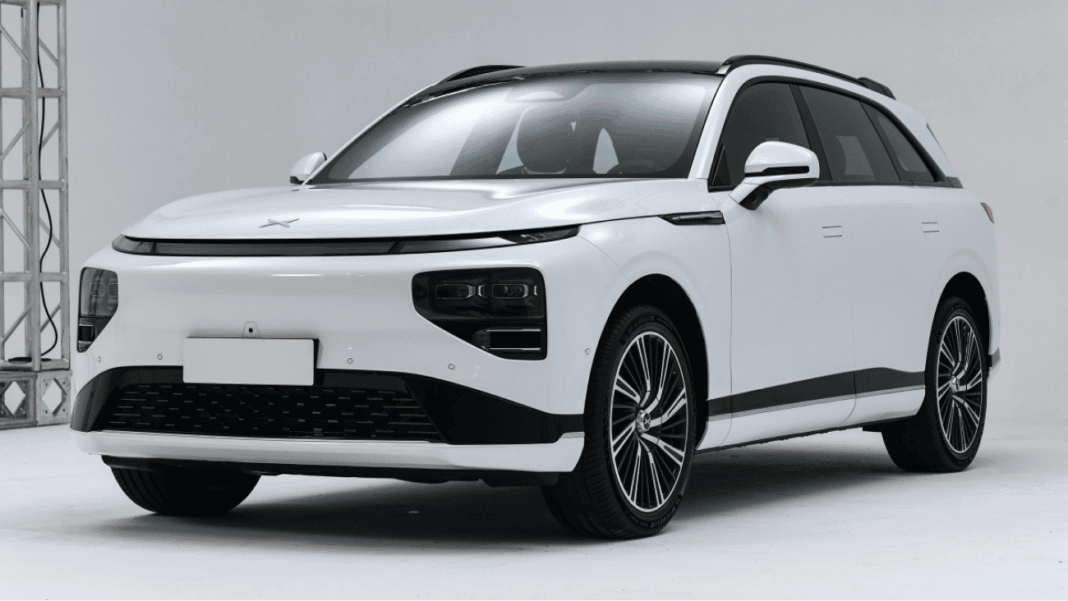 The XPeng G9 all-electric SUV has finally hit the Chinese market. It has up to 551 horses and 702 km of range. As for the starting price, it is 309,900 RMB (47,700 USD). XPeng founder He Xiaopeng mentioned that the XPeng G9 can rival even Porsche in China. Let’s get acquainted with the ambitious XPeng G9.

The XPeng G9 is an all-electric D-SUV. Its design stays in line the XPeng’s latest design language. Its front end got a well-known X Robot Face design with narrow LED running lights and large blocks of high beams under it. As for its overall appearance, we can characterize it as minimalistic and simple. It is good for a low drag coefficient of 0.27 Cd. The G9 has a traditional SUV body shape with a few sporty touches, like a slightly slanted D-pillar or a roof spoiler. Other fine details of the G9 include pop-out door handles and a wide LED taillight unit.

The interior of the XPeng G9 stays in line with the exterior in terms of simplicity. But it has a lot of high-tech features on board. Let’s start with a quick tour of the G9 interior. We will crack on with its layout. Every trim level of the XPeng G9 has only 5 seats. There is no information about the version with 7 seats yet. As for the sound system, it comprises up to 22 Dynaudio speakers. However, the G9 goes with only 8 speakers as standard. If you want to get 14 more, you should pay an extra 22,000 RMB (3,100 USD).

Of course, the key feature of the G9 is its giant screens. Let’s start with the smallest one, which is an instrument panel screen. Its diameter reaches 10.25 inches. But the key feature of the G9’s interior is a large twin screen on the center panel. It comprises two 14.96-inch screens. They are equipped with X-mart 4.0 system. Qualcomm’s 8155 chip powers it. Aside from screens, there are two wireless phone charge pads and two cup holders on the center tunnel. Worth mentioning that there are few physical buttons in the XPeng G9’s interior. They are replaced by touch screens and the voice control function.

We can also highlight that the XPeng G9 has the XPILOT 4.0 autonomous driving system. It comprises 31 sensors, including 2 LiDARs and 5 millimeter-wave radars. This system is powered by Nvidia Drive Orin chips with a total computing power of 508 TOPS. The core feature of the XPILOT 4.0 is an NGP (Navigation Guided Pilot), an advanced autonomous driving system which allows a car to drive by itself in the city.

The entry-level G9 goes with an LFP battery with a capacity of 78.2 kWh. With it on board, the G9’s range will reach 570 km (CLTC). The RWD version also has a long-range version, equipped with a 98-kWh battery. Its range reaches 702 km. The G9 4WD has the same 98-kWh battery, but its range is limited to 650 km due to higher energy consumption. We should also mention that the XPeng G9 got a 4C supercharging battery system. It allows G9 to charge 200 km of range in 5 minutes.

We should also underline that XPeng founder, He Xiaopeng said that the XPeng G9 will take over Porsche and create a new benchmark in industry. That looks like a PR-speech since Porsche hasn’t got any direct competitors of the XPeng G9 in China. We may see that cars of these brands are designed for different customers. Right now it’s hard to say what exactly He Xiaopeng wanted to say.

All in all, the XPeng G9 is an impressive SUV with great tech on board. We will keep an eye on it, so stay tuned!