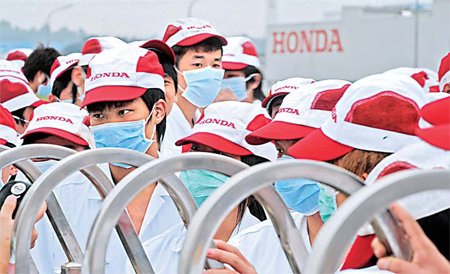 China Daily reports that workers are on a strike in all four of Honda’s assembly plants in China. Workers want more cash. Instead of talking money Honda came up with an an agressive plan to make much more cars which would likely mean, so feared the workers, that they had to work even harder for their rmb. That did it and all workers went on strike. China Daily talks:

“GUANGZHOU – Honda’s four auto assembly plants in China have ground to a halt after workers at the company’s parts maker went on strike demanding better wages.

The strike, the largest industrial action ever reported in China, was continuing on Thursday after negotiations broke down between the management of Honda’s supplier factory in China and its 1,900 workers, according to an executive in Honda Auto Parts Manufacturing Co in Fo- shan, Guangdong province.

As a result, the entire China operations of Honda Motor, Japan’s second-largest automaker, have been at a standstill this week.

Besides Guangqi Honda’s two factories in Guangdong, which make the Accord sedan and Odyssey minivan, the other two affected plants are Honda Automobile China, also in Guangdong, and Dongfeng Honda in Hubei province. One of the Guangqi factories is responsible for shipments to a dozen European countries.

The strike follows Honda’s announcement earlier this week of an aggressive plan to boost production in China, raising annual production capacity at its Guangqi Honda joint venture from 360,000 units to 480,000 vehicles by the latter half of 2011.

The supplier factory’s workers walked out on May 17, complaining about low wages. After resuming work temporarily, they have been on strike since May 21. Negotiations with the management have been on and off since then, company sources said.

“So far, Honda does not have a timetable for resuming production,”

Zhu Linjie, a Beijing-based spokesperson for Honda Motor (China), told China Daily on Thursday. He also said that there is no change in the company’s plan to expand its production capacity in China by 28 percent in 2012 to 830,000 units, up from 650,000 units now.

Industry experts said the strike serves as a warning for other auto companies in China.

Automakers practice just-in-time delivery in parts and components, so the shutting down of one supplier can soon produce a company-wide impact, as in the case with Honda.

Negotiations were held on Tuesday between executives from all workshops and workers but “due to vast differences, the two sides failed to reach a deal,” according to a company executive who declined to be named.

A Foshan government official who was involved in the talks told China Daily that the government has not found any violation of the labor law by the Honda factory management.

The city’s minimum wage is 920 yuan per month but most of the workers are unsatisfied “because of rising consumer prices,” he said.

The wage levels at other automakers or suppliers are similar nationwide, said Duan Chengwu, a Shanghai-based analyst with the consulting firm IHS Global Insight.

He said other automakers in China should learn a lesson from the Honda episode. “Profits in China’s auto industry are relatively high compared to mature markets, and there’s room for increasing workers’ benefits.”

China became the world’s largest auto market last year after it sold more than 13.6 million automobiles. But “the low wages could affect the future of the industry’s future,” he said.