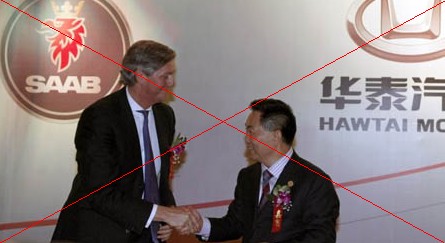 Spyker said it was continuing talks with Hawtai and others, while a spokesman for Vladimir Antonov, a Russian businessman and former Spyker shareholder, said he was still interested in investing in the troubled Swedish marquee.

Hawtai and Dutch-listed Spyker agreed a deal last week to pump 150 million euros ($216 million) into the loss-making marquee and produce a new model in China. But this was spoiled by a failure to get necessary approvals.

The Hawtai deal came only a year after tiny supercar maker Spyker bailed out the General Motors unit. GM retains an interest through redeemable preference shares.

“Since it became clear that Hawtai was not able to obtain all the necessary consents, the parties were forced to terminate the agreement with Saab Automobile and Spyker with immediate effect,” Spyker said in a statement.

Hawtai’s failure follows similar cases where Chinese companies have not managed to complete deals, including Sichuan Tengzhong Heavy Industrial Machinery’s bid for GM’s Hummer, which collapsed in 2010 and China’s Xinmao did not have enough time to obtain approvals to continue its bid for Dutch cable maker Draka.

Spkyer said Saab Automobile may still enter into a strategic partnership with Hawtai or another Chinese party on manufacturing, technology and distribution in China.

Theodoor Gilissen analyst Tom Muller said that Spyker’s reported cash of 70 million euros as of the end of December would definitely have been spent in the first three months of 2011 and so Saab faced an extremely difficult situation.

“It’s living by the day, it’s not just having money to pay its future obligations, it’s what it owes its suppliers already,” Muller said.

Spyker shares fell to a two-week low, down 7.3 percent at 3.89 euros, versus a 0.5 percent fall of the Amsterdam small cap index.

Spyker chief executive Victor Muller declined to comment on the failure of the Hawtai deal or about talks with other potential strategic partners.

Sypker said discussions were continue with the European Investment Bank (EIB) about drawing 29 million euros from an EIB loan and obtaining consent for the sale of Saab property.