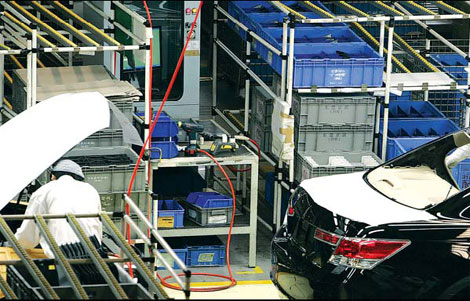 – Honda to make Fit EV in China by 2012.
– Honda to import Insight, CR-Z and Fit hybrids in China next year.
– Production of Honda’s two Chinese joint ventures on steam by August.

Read on for more:

Honda Motor Co recently announced that its two car joint ventures in China will recover in three months to pre-earthquake production levels or even beyond. As component supplies from Japan increase, Honda’s production in China will adjust accordingly, the company said in an emailed statement.

Guangqi Honda, the joint venture between Honda and Guangzhou Automobile, and Dongfeng Honda, its venture with Dongfeng Motor Corp, will regain or surpass the “normal production level” by August, it said.

The disaster caused a halt in production at many Japanese carmakers and parts suppliers.

The shortage of parts and components also interrupted operations at some overseas Japanese auto plants.

Statistics from the China Association of Automobile Manufacturers showed the market share of Japanese car brands dropped to 16.75 percent last month from 20 percent in March.

The earthquake will have only a “short-term” impact, Honda said in the statement, noting that in the long run, the company will increase its production in China.

The second-biggest carmaker in Japan last year moved 646,600 cars in China. It plans to sell 730,000 vehicles this year, an increase of about 13 percent.

In the second half this year, Guangqi Honda will complete built out at its plant in Guangzhou’s Zengcheng district and raise the joint venture’s production capacity to 480,000 cars a year.

Dongfeng Honda has a new plant under construction and scheduled to be finished in the last half of 2012 that will have an initial annual capacity of 100,000 cars.

Its existing factory can produce 200,000 cars annually. Honda’s target is to make 890,000 cars in China in 2013. The company also said it will develop a joint venture brand together with Dongfeng Motor Corp, but didn’t elaborate.

The company worked with Guangzhou Automobile for their joint venture brand Everus.

The first model Everus S1 hit the market in mid-April and sold 4,000 units the first month.

At the Shanghai auto show in April, Honda president Takanobu Ito said the company will introduce three petrol-electric hybrids to China next year – the Insight, CR-Z and Fit.

He added that Honda is preparing to produce purely electric vehicles in China in 2012. It is reported that the first locally made model may be the Fit EV Concept.