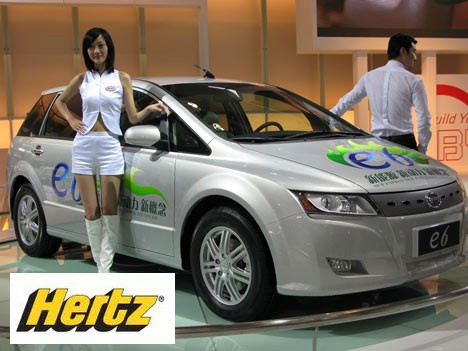 The company will form a partnership with GE Energy Industrial Solutions to roll out EVs and charging stations, and it pledged to promote EV rental programs starting in Shanghai.

Hertz already offers EV rental services in the United States and Europe. The company operates in more than 8,500 cities in 146 countries.

According to Johny Wang, general manager of GE Energy Industrial Solutions, Greater China, GE will work with Hertz to bundle EV leasing and charging facilities as a solution, which it will provide to multinationals and government agencies.

Earlier this month, Hertz reached an understanding with BYD Automobile Co Ltd to buy its EV product, the e6, for test operations in the southern Chinese city of Shenzhen.

But EV analysts in China reacted with some skepticism to the company’s moves.

“This idea is novel, but I doubt whether they can translate it into cash flows,” said Lin Cheng, deputy director of the National Engineering Laboratory for Electric Vehicles in Beijing.

“For example, one of the electric models Hertz is adopting in China, the BYD e6, bundles so many battery sets in the car that it becomes bulky and heavy, which leads to high costs and an uncomfortable driving experience.”

The e6, which BYD claims is the most advanced EV in China, was sent to a taxi company in Shenzhen for trials starting in 2010. Comments about the car have been widely divergent, and the vehicle isn’t yet available to consumers.

Lin said that even with rebates from the central and local governments, most EVs are still too expensive for rental companies to buy.

“The high price of EVs is the major hurdle for Hertz and other car rental companies to roll out rental services to the public,” Lin said. “In addition, insufficient charging stations and poles are posing another problem for consumers,” Lin said. “If the power runs out in a place without charging facilities, it can be a disaster.”

Lin Mi, a press officer with BYD, told China Daily that the cooperation with Hertz is in its infancy.

But Lin acknowledged that this is a good chance to publicize the e6, saying: “It’s always nice to increase our visibility.”

Despite the tepid response from industry experts, Hertz’s move has drawn applause from its competitors.

Zhang Ruiping, president of eHi, a major car rental company in China, said he is completely in favor of Hertz’s initiative.

“It is a tentative move for Hertz to provide opportunities for consumers to experience EVs”, Zhang said. “It’s a good opportunity to see the public’s response.”

But he said that the move was almost purely symbolic, since 99 percent of the rental business still involved conventional cars.

“The market is so small that there is barely any competition during this area in the short term,” Zhang said.