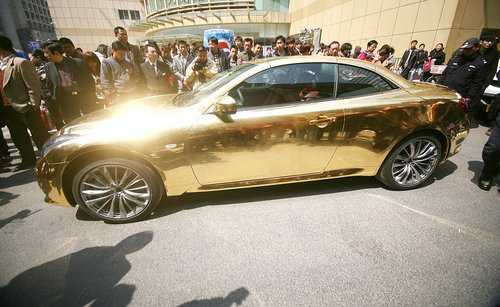 Nissan Motor Co said it may build Infiniti cars in China and will locate its global headquarters for the luxury brand in Hong Kong as it targets wealthy consumers in burgeoning markets in Asia and elsewhere.

“We are considering production in China,” Nissan spokesman, Shiro Nagai said. No decision to do so, however, had yet been made, he added.

Infiniti debuted in 1989 as a luxury brand for overseas markets. Infiniti models are currently manufactured at plants in Tochigi and Fukuoka prefectures in Japan, which have a combined annual capacity of about 200,000 units, the Nikkei said.

Under a six year business plan that Japan’s No 2 automaker dubs, “Nissan Power 88” the company is aiming to raise sales of the luxury line to 500,000 within six years. Its new Infiniti headquarters in Hong Kong, which will be responsible for global marketing, will employ 100 people, Nissan said.