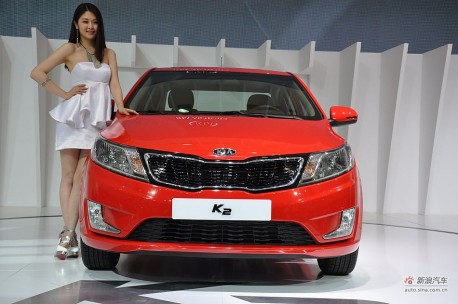 Kia Motors will build its third automobile manufacturing plant with an annual production capacity of 300,000 cars in China, the world’s largest car market. This will increase the Hyundai-Kia Automotive Group’s total production capacity in China to 1.73 million vehicles, ranking the group third after Volkswagen and GM.

Kia said on Wednesday that Group chairman Chung Mong-koo met with the governor of Jiangsu Province, Luo Zhijun, and the Communist Party chief of Yancheng city, Zhao Peng, to hold a contract-signing ceremony in the Jiangsu capital of Nanjing. The event paved the way for construction to begin on the new Dongfeng Yueda Kia plant.

Kia plans to set up its latest operation in Yancheng, where it already operates two production bases. Construction will begin at the end of next year with completion scheduled for the second half of 2014.

“Kia Motors is one of the fastest-growing companies in China’s automotive market,” Chung said during the signing ceremony. “We must actively meet rising demand in order to maintain our lead in China.”

Yancheng city is providing 1.5 million sq. m of factory space to Kia for free as an incentive and offering other perks, including income tax cuts. Kia plans to manufacture its latest models at the new plant.

Hyundai and Kia have felt the need to boost production capacity in China in recent years to reflect its growing market, which rose to 11.12 million vehicles last year, up 34 percent from 2009.

If commercial vehicles like trucks and buses are included, the market stands at 18 million vehicles to rank as the world’s largest, where it is said that cars are sold as soon as they roll off the assembly line.

A Kia manager said, “Demand is so high that this year our workers have to work four extra hours every day, and even on weekends.”

When Hyundai Motor’s third plant in Beijing begins production in July of next year, and Kia’s third base in Yancheng starts rolling out cars in 2014, Hyundai-Kia will see its total output capacity in China hit 1.73 million vehicles, more than at Hyundai’s main plant in Ulsan (1.53 million).

Hyundai and Kia’s combined domestic output capacity stands at 3.48 million, and the two carmakers are projected to manufacture 3.33 million automobiles in Korea this year. This is just 10 percent more than the group’s total production capacity overseas.

As such, analysts predict it is only a matter of time before the carmakers begin churning out more cars on foreign shore than on home turf.