GM on track to double China sales by 2015 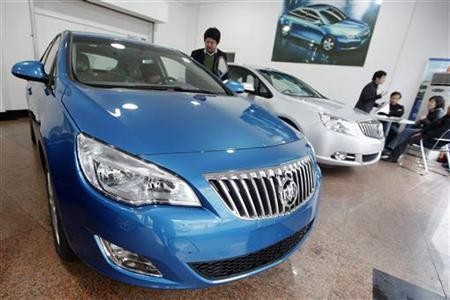 General Motors is on track to double its annual tally to 5 million vehicles in China by 2015 despite slowing growth in the world’s largest auto market, its China chief said on Monday.

GM, which competes in China with Volkswagen AG among other global brands, has been outperforming the market so far this year due in part to hot-selling Buick and Chevrolet cars made at Shanghai GM, its flagship China car venture.

“We still have our plan in place to double our volume by 2015, and we are still working toward that,” Kevin Wale, president and managing director for GM’s China operation, told Reuters in a telephone interview.

China’s once booming auto market has downshifted to a 3.6 percent gain in the first nine months, after jumping 32 percent and 46 percent, respectively, in 2010 and 2009.

The cooling has been attributed to a raft of factors, from the end of tax incentives for small cars to local authorities’ initiatives aimed at easing ever-worsening traffic congestion.

Wale, however, remains optimistic on the growth potential of the Chinese market.

“There is still going to be substantial growth in the China market on a trend basis and we still think it will grow between some 7 to 10 percent per year in the foreseeable future.”

He expected passenger car sales to grow about 10 percent this year, with the overall market gaining 3-5 percent.

In October, GM, which operates auto manufacturing ventures in China with SAIC Motor Corp and FAW Group, sold 220,412 vehicles in the country, up 10.4 percent from a year earlier. The company expects sales for the full year to grow as much as 10 percent.

To reach its 2015 China target, GM aims to introduce some 60 new and upgraded models in the country during the period — about 12 of them being Buicks and 15 Chevrolets, Wale said in April.

GM started to export its Chevy new Sail, made at Shanghai GM, in January 2010, with shipment totaling 5,000 units, as of the end of October of that year, mostly to Chile.

Exports of Sail, along with some mini vehicles made at GM’s venture in southern China, are expected to reach 50,000 units this year, mostly to South America and North Africa.

Wale said he did not have a specific target for exports but would continue to look for opportunities.

“We export only if we have a product. When we find that we have a unique product and there is an opportunity in distribution processes around the world, we take advantage of it.”

Wale reiterated a company spokesman’s comment that GM might block a deal by two Chinese companies to take over troubled Swedish carmaker Saab, in which GM still holds some preferred shares.

The deal, valid through Nov 15, requires the approval of the Chinese government, the European Investment Bank, the Swedish government and GM, which has preference shares in Saab and is a major supplier of components.

A GM spokesman in Detroit told the New York Times over the weekend that GM might block the deal unless it would not affect GM’s interest in China and elsewhere.