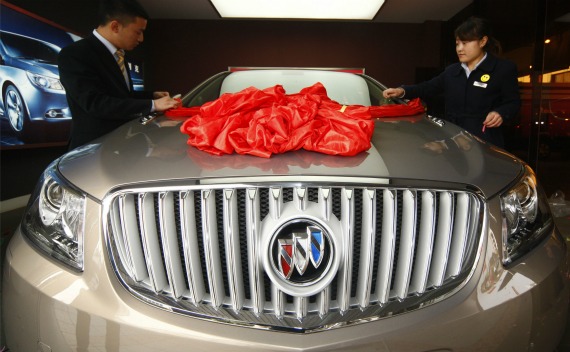 General Motors Co., the biggest foreign automaker in China, said it expanded sales in the country to a record last year, led by demand for its Buick and Chevrolet sedans.

Deliveries to Chinese dealers in 2011 climbed 8.3 percent from a year earlier to 2.55 million vehicles, the Detroit-based company said in a statement today. Sales of mini commercial vehicles and sedans at GM’s minivan venture with SAIC Motor Corp. rose 4.8 percent to 1.29 million units.

“They attacked the market on two ends,” John Zeng, Shanghai-based director of Asian forecasting at industry researcher LMC Automotive, said in a phone interview. “In higher-end models they introduced a curvy European style which Chinese consumers liked, and in the low-end market they launched completely locally designed models.”

GM will introduce more than 60 new and upgraded models in the five years from 2011 to 2015, half of them under its Buick and Chevrolet brands, the company said last April at the Shanghai auto show. GM started taking orders for its battery- electric hybrid Volt sedan in November, and its new Malibu midsized sedan will be available in China this year.

China removed subsidies for rural buyers and phased out a cut in the sales tax last January, while the city of Beijing imposed quotas on new vehicle licenses. Industrywide deliveries for 2011 may have risen 3 percent to 5 percent, the least in 13 years, according to the China Association of Automobile Manufacturers, which will release annual figures next week.

In response to slowing demand, GM cut the price of its Wuling Sunshine light trucks, which retail at about $4,400, from May. The automaker also rolled out its local sedan brand Baojun to target first-time buyers in inland provinces and less developed cities.

The carmaker aims to double deliveries in the country to 5 million by 2015 and plans to focus on expanding its luxury car brand Cadillac and its sport-utility vehicle lineup, GM’s China president Kevin Wale said last month. He forecast that Chinese auto demand may expand 7 percent to 10 percent in 2012, led by demand for passenger cars, with sales of commercial vehicles probably growing 5 percent.

“The luxury market in China is going to grow very strongly,” Wale said in an interview on Bloomberg Television on Dec. 21. “It’s a big focus for us.”