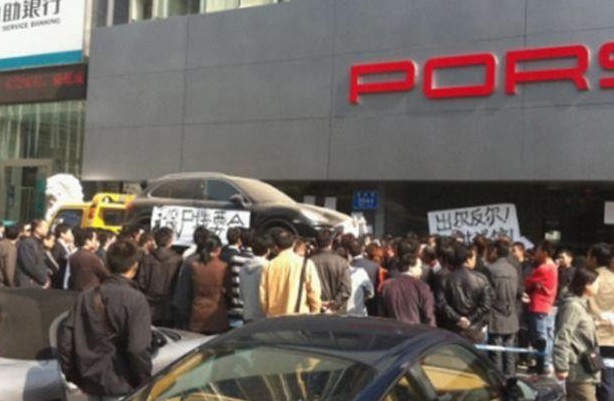 An angry owner of a Porsche Cayenne staged a massive protest at his local Porsche dealer in the great city of Shenzhen in Guangdong Province. He bought a brand-new Cayenne two months ago for 2.7 million yuan. Unfortunately he experienced a lot of trouble, the owner claims the car’s problems made him almost crash on two occasions.

He took his Cayenne back to the dealer who promised to fix it, but the problems didn’t go away. He went back again, and again, but there was still no fix. In the end, the owner couldn’t take no more. He rented a truck and dragged his SUV right in front of the dealer, covered with banners accusing the Porsche dealer of all kinda bad, including discrimination… 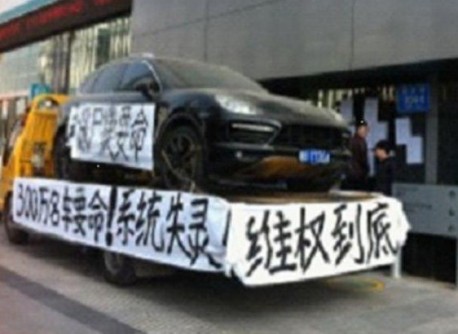 The owner argues that this sort of thing would never happen in the US or Germany. Therefore, he says, the Porsche dealership in China “discriminates against Chinese consumers”. This is a very sensitive thing in China and still appeals to many. Chinese people feel easily ‘discriminated against’ by ‘the West’. 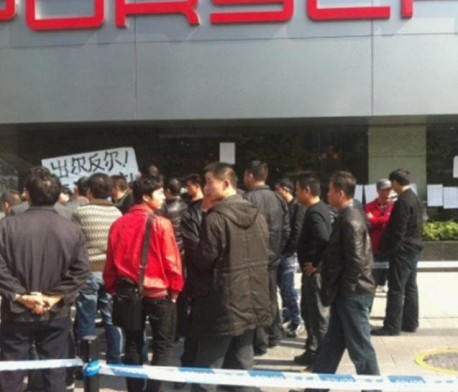 According to reports in Chinese media the dealer tried to solve the problem by offering the angry owner a new Cayenne in exchange for his troubled car. The owner didn’t want another Porsche and asked his money back.

Porsche reluctantly agreed, but only if the owner would sign a confidentiality agreement stating that he wouldn’t tell anyone why he gave his Porsche back. The owner refused to sign and the deal fell through.

As for now, there seems no solution in sight…