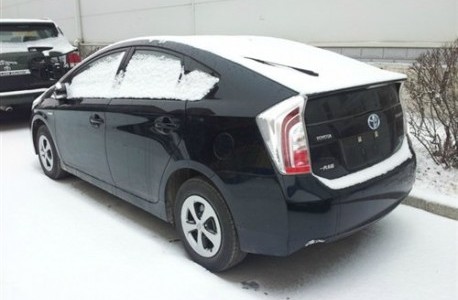 Promoting environmentally friendly products and technologies will be a core focus of Toyota’s future development for the Chinese car market, according to its new strategy unveiled on March 1 in the capital city. The plan called Yundong, or Cloud Action, is Toyota China’s first-ever strategic plan for its business in the country.

Toyota Motor Corp President Akio Toyoda has said many times that “China is the most important” market in the world, but the Japanese carmaker has less than 10 percent of the auto market, far behind global rivals such as General Motors and Volkswagen.

According to its global development vision released last year, the auto giant aims to become a company “that is beyond consumers’ expectations and creates happiness and fortune for consumers and the regions where it operates”, said senior managing director Akira Sasaki at the unveiling ceremony.

Guided by such ambitious goals, Toyota “is changing on a global scale”, he said.

Dong said the plan aims to bring advanced technologies to the local market, improve the local management and marketing system, and build “exciting” products “that touch the hearts of Chinese consumers and are beyond their expectations”.

The promotion of Toyota’s hybrid cars will be one of its main moves.

“Hybrid power, as the only new-energy technology in large-scale production today, has won the trust of more than 3.6 million Toyota consumers worldwide,” said Dong.

“The world’s hybrid cars saved more than 6.5 million liters of oil, along with around 18 million tons of carbon dioxide emissions, by the end of 2011,” he said.

“We believe the popularity of hybrid cars will contribute to building a better environment,” Dong added.

He said Toyota’s hybrid “dual-engine” power technology differs from others because its gasoline engine and electric motor work independently, increasing power while reducing gasoline use.

He said the latest Toyota Hybrid Synergy Drive technology can cut gasoline consumption by up to 40 percent, yet provide 30 percent more power.

The company plans to introduce a new concept hybrid car at the Beijing International Automobile Expo next month.

The model uses a power unit developed by Toyota Motor Engineering & Manufacturing Co Ltd, founded in 2010 in Changshu, Jiangsu province as the company’s first R&D center in China – and its largest in the world.

Toyota has set a sales target of 1 million cars in China this year.

According to its projections, Toyota’s sales in China will reach 1.6 to 1.8 million units by 2015 at the same time its locally made hybrid units are expected to reach large-scale production at its joint ventures with First Auto Work and Guangzhou Automotive Group.

Its long-term plan calls for new-energy vehicles to account for 20 percent of all Toyota’s sales in China.