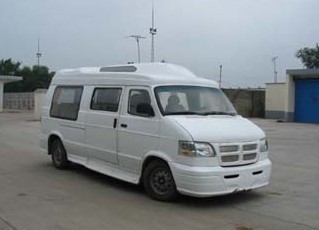 Early Friday evening in Beijing, a windy day today in the capital, time so for some China Car History! This extremely interesting vehicle is the Yanjing YJ6560 minivan. It was made in the early 1990’s by a company called Beijing-Yanjing Automobile Factory. Yanjing is the old name of Beijing, just like in Yanjing Beer, and Beijing indeed the name of this great city today, where the company is based.

The company started life as a repair shop, and moved on to military vehicles and minivans. Back now to the Yanjing YJ6560. Sadly, I only got one picture meaning very few have been made. Design-wise it was inspired by Dodge vans of America. Fortunately I did find all tech specs, it is a bigger car than it seems, based on the chassis of a small bus.

Size: 5700/2060/2270, wheelbase is 3570. Power came from a 2.9 liter 6-cylinder patrol engine that pooped out 118kw and was made in-house by the Beijing-Yanjing Automotive Engine Company. Top speed was 110 km/h. A 2.4 liter Mitsubishi 4-cylinder patrol was also available, it had 95kw and was made by, take a breath, the Shenyang Aerospace Mitsubishi Motors Engine Manufacturing Corporation.

This was a joint-venture that made Mitsubishi engines for the Chinese market, they sold the engines to whoever wanted to have ‘m, and many small Chinese car makers use the 2.4 up until today, including now big names such as Great Wall Automotive, Landwind, and Zhongxing.

The YJ6560 was made up as a sorta luxurious executive-vehicle, just like similar shaped vehicles, including its inspiration, in the US. But it seems the time wasn’t right yet in those days for such a car, today they would do much better with all those richies running around. Still, a special vehicle this YJ6560 was!