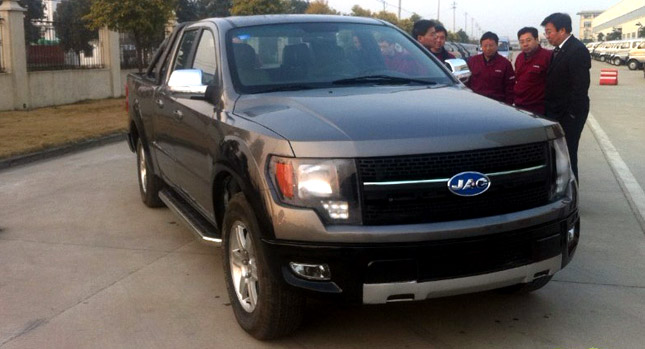 The biggest auto news from China in February was the JAC 4R3, a clone of the iconic Ford F-150. The story was also the biggest ever for this website and kinda made us famous. Yez, I am bragging a bit, but so is Ford.

Bill Coughlin, President and CEO of Ford Global Technologies and Intellectual Property Chief, told to Autoline’s host John McElroy that ford prevented the 43R to appear on the Beijing Auto Show. Well well, ain’t that cool? But is it true?

Speaking to Autoline’s host John McElroy, Bill Coughlin, President and CEO of Ford Global Technologies and Intellectual Property Chief, said that the Blue Oval took all the necessary steps to prevent this [the 4R3 appearing at the Beijing Auto Show] from happening.

When the conversation came to China and patents, Coughlin said: “You need patents and they are country specific, so that you need to get patents filed in China as well, and frankly, we built up quite a portfolio in trying to protect us. You don’t see Ford being ripped off in China.”

Asked about JAC and the 4R3, the Ford exec commented: “There were a couple of press reports that ‘oh’, at the Beijing Auto Show there’s going to be an F-150 clone. It didn’t happen. Not going to happen.”

Coughlin said that Ford is very protective of its work and it immediately addressed the problem.

“We did our job. There was good global teamwork,” he said. “So, yes, we can protect ourselves in China, it’s not easy, but you can do it. Is it expensive? Not really, I mean, it would be less than filing here [U.S.].”

What does he say? Well, nothing really. He is merely insinuating Ford did something, but he doesn’t say what. So did Ford really do something? Did they need to? Chinese media did indeed report in February that the 4R3 would be on the Beijing show. JAC however never confirmed that in public. The 4R3 was furthermore a prototype, not a finished car.

But the most strange thing about Ford’s bragging is that Chinese automakers have never shown any fear of foreign anger about any copies they made, be it BYD, Chery, Geely, or whichever Chinese brand. The 2012 Beijing Auto Show was still full of clones. And now JAC would suddenly fear Ford? I doubt it very much and I wouldn’t be surprised at all when a production-ready 4R3 appears at another auto show.