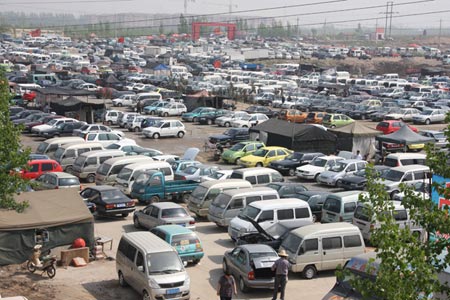 More than 90 percent of cars that should have been scrapped in China were sold to black markets where they were repaired or modified to be unlicensed cabs and second-hand cars, reported China National Radio.

A total of 7.42 million cars should have been scrapped by the end of last year after reaching their service life limit, but only 500,000 cars were scrapped under normal procedures, according to a report by the China National Resources Recycling Association.

The rest of the cars, accounting for more than 93 percent of the total number that should have been scrapped, were then sold to black market car dealers who fixed them or removed car parts for resale, the radio program said.

A CNR reporter met a scrap car dealer in a Beijing second-hand car market and the dealer took him to a used sedan, in such bad condition that the doors wouldn’t close.

The dealer told the reporter the sedan’s owner didn’t scrap the car under normal procedure but sold it to him. The sedan was not licensed, not registered and didn’t carry any official documentation, and was priced at only 3,500 yuan, the dealer said.

Such cars often are sold on the black market, and dealers promise the customers they can sell the car back to them whenever they don’t need it.

Some other cars that should have been scrapped were bought by second-hand car companies who repainted them, repaired them and forged their life service time to sell them in the market again, the program said.

Buyers often use them as illegal cabs, and some become training cars at driving schools, the program said.