Beijing want to Halve its number of vehicles on the Road 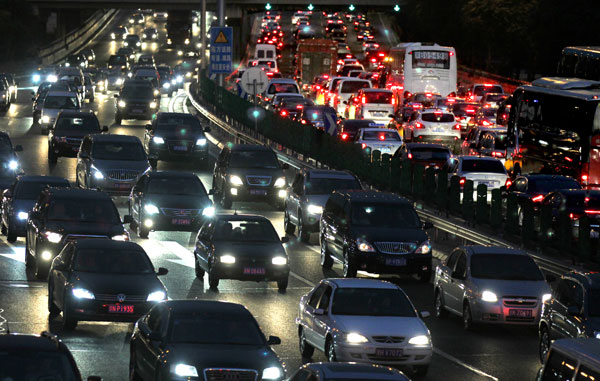 A proposal to tackle Beijing’s traffic gridlock, which would halve the number of vehicles on its streets, has sparked controversy among experts and residents.

The capital’s transport commission says officials will consider requiring vehicles with odd and even registration plate numbers to stay off roads alternately “at specific periods of time and in specific areas”.

A similar measure was enforced for two months during the 2008 Olympic Games to combat congestion and improve air quality.

Traffic dropped by 21 percent on major roads, and average speeds increased by about 27 percent within a month of the measure being introduced, transport authorities said.

However, the measure has not been enforced since the Olympics.

Despite a series of rules already introduced, the authorities have been unable to ease congestion in Beijing, prompting officials to look at other ideas, said Chen Yanyan, a professor at Beijing University of Technology’s Transport Research Center.

There are more than five million vehicles on the streets of the capital, a city with a population of more than 20 million, making it one of the most congested in China.

Motorists are already restricted from driving their cars one day a week, according to the last digit of the plate number. Other measures to check traffic congestion, such as raising parking fees and limiting new-car registrations to 20,000 a month through a lottery system, have also been imposed.

If approved, the latest proposal will probably have a greater effect than other restrictions, Chen said.

“A major characteristic of Beijing’s congestion is it varies greatly at different times and areas,” she said. “Compared with previous measures, this one is more flexible and responsive to control traffic volume.”

Wang Limei, secretary-general of the China Road Transport Association, said: “I think caution is required. It could ease traffic congestion in the short term, but it can’t solve the problem at the root.

“Now drivers are restricted from the roads one day a week, which is tolerable. If they are required to drive on alternate days, it would cause much more inconvenience, and many people may very likely turn to buying a second car to circumvent the measure.”

Fan Xiaole, a businessman in Beijing, said the measure is not a good one and will cause trouble for the public.

“I don’t think it can solve Beijing’s traffic problem,” he said. “Similar measures have been used, but none has been useful. Rich people can buy two or even four or five cars to evade the odd-even car plate measure.”

“For example, many bungalows in the urban area have been demolished and replaced by commercial buildings, which attract much higher traffic volume,” he said.

Liu’s opinion is echoed in a report on Beijing’s social development released on Wednesday by the Beijing Academy of Social Sciences, which says more than half of the city’s total traffic load occurs within the Third Ring Road, a very small portion of the capital’s total area.

The root cause of traffic congestion lies in misplanning the report said. Although Beijing started a plan to build 14 satellite towns as early as 1993, the new towns have become dormant due to lack of support measures, while economic activity in the central urban area continues to strengthen, the report added.

It suggests enforcing a traffic evaluation system that applies to all large projects in the city. Although this system was introduced several years ago, the report said it usually fails to be carried out effectively.

Chen at the Transport Research Center said transport authorities should adopt more sophisticated management. “The measures to cope with congestion should be flexible and responsive to changing traffic demand, instead of being carried out rigidly without any modification.”

Improving public transport services is the key to solving Beijing’s traffic congestion, she said, adding: “If people can have convenient access to public transport, administrative measures such as restricting the use of cars will be more acceptable.”

Beijing has taken a series of measures to develop public transport. It aims to expand its subway network to 440 kilometers this year, comparable with other large cities such as London.

Several thousand public bikes have also been deployed across urban areas in the capital, and the number is expected to reach 50,000 in the next few years.

Despite these measures, public transport services in the city still fall short of demand, especially the overcrowded subway.

Passengers made 210 million journeys on the subway in September, an increase of 12.5 percent over the same period last year, according to the Beijing Municipal Commission of Transport.

“Public transport requires a long construction cycle,” Chen said. “In five to 10 years, when the subway network is improved, I believe Beijing’s traffic congestion will be greatly eased.”