Beijing to have 2000 taxis running on natural gas this year 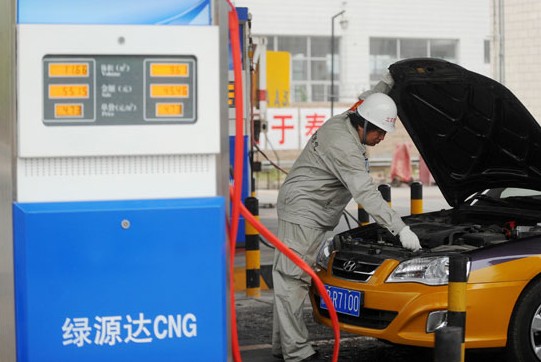 Beijing plans to increase the number of taxis that run on natural gas from the current 99 to 2,000 by the end of July in a trial project to promote the use of clean energy in public transportation.

Beijing now has 2,000 vehicles powered by natural gas, and that number is expected to be 10,000 by 2013, which will include 2,000 taxis, 3,143 city buses, and vehicles for some driving schools, the Beijing Environmental Protection Bureau said.

A vehicle using natural gas can go as far as 500 km and is capable of meeting the demand of urban commuters, he said. The city will add more than 30,000 additional natural gas vehicles by the end of 2017 if the trial project is successful, a total of 7,000 natural gas powered public buses will be put into service by the end of 2015 the bureau said.

Vehicles that use natural gas instead of gasoline can greatly reduce major pollutants in the air. Pollutants with particulate matter with a diameter smaller than 2.5 micrometers can be cut by 93 percent; nitrogen monoxide by 20 to 40 percent; carbon dioxide by 25 percent; and carbon monoxide by 50 to 70 percent.

However, the promotion of clean-energy vehicles is not free from problems, with the lack of natural gas stations being the biggest concern.

Unlike electric vehicles, which enjoy many preferential policies, including exemption from the license plate lottery and a price discount, natural gas vehicles are not yet widely accepted, and construction of supporting facilities, like refueling stations, is lagging.

Xu said that as the vehicles powered by natural gas become more popular in Beijing, more vehicle manufacturers will get sales permits and come up with more vehicles that use natural gas to meet consumer demand.

The Beijing Gas Group, the operator of the natural gas pipe network in the city, said Beijing – the biggest natural-gas consumer nationwide – had a 15,000-km pipe network by the end of 2012, covering all downtown and 95 percent of suburb areas with a total of 6 million users.

Natural gas accounted for 14 percent of the capital’s energy consumption in 2012, an increase from 6 percent in 2010. The city bought 54 billion cubic meters of natural gas from 1997 to 2012, replacing 84 million tons of coal.

Gas consumption in Beijing will reach 18 billion cubic meters in 2015, 21.6 billion cu m in 2017 and 30.6 billion cu m in 2020, according to the city’s energy plan. In addition to implementing the gas-fueled vehicle pilot project, the city also vows to eliminate all coal-fired boilers within the Fourth Ring Road by 2013.