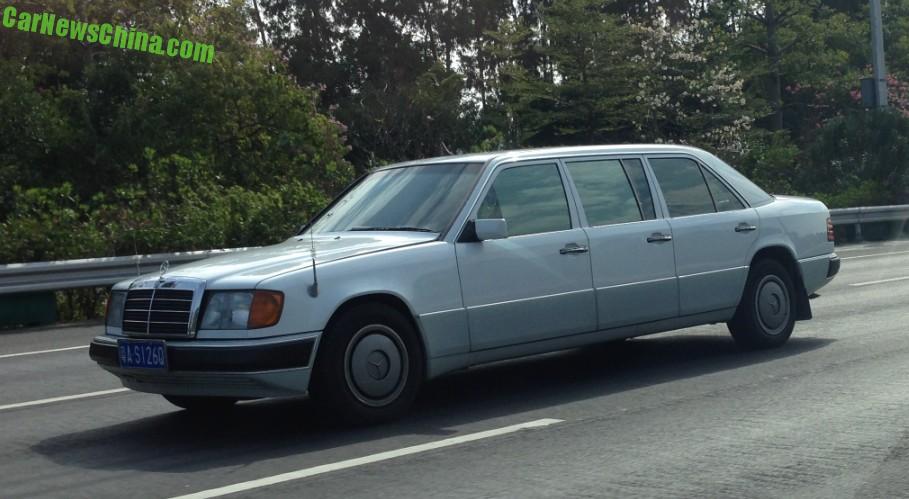 A wondrous white W124 Mercedes-Benz E-Class six-door limousine, Spotted in China on the airport expressway in the great city of Guangzhou in Guangdong Province. The great Benz appeared to be in very good shape, looking very clean in white, nothing broken and nothing rusted, with shiny chrome and the original plastic wheel covers. Flagpole is confusing, as it normally points at an (ex) government or consulate car, but those are seldomly painted white.

The W124 was manufactured from 1985 until 1996. The six-door stretched limousine was an official factory-built variant, aimed mainly at airport-taxi companies. Wheelbase was stretched by 800 mm to 3600 mm, bringing the total length of the vehicle to 5540 mm. The limousine featured a third row of seats in between the front seats and rear bench. China imported a small number of the stretched W124 in the early 1990’s. Most were used by state-owned hotels and some by the government (but those were all black). 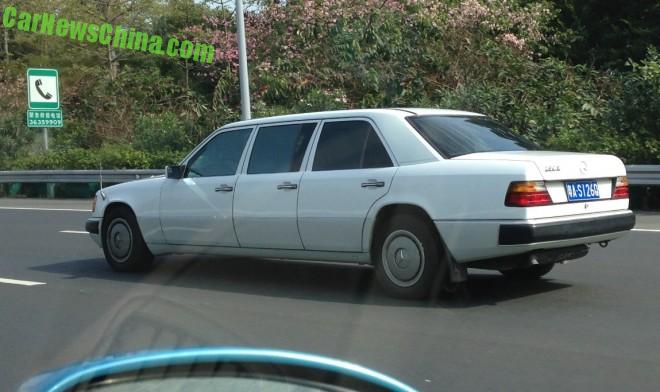 The pole then, was most likely added for the cool. This particular car is a 260E, powered by a 2.6 liter six-in-line with 170hp. It is the second such car we meet in China, after a very similar white 260E at the Dalian Car Museum. This Guangzhou example however, was apparently still hard at work, ferrying folk from town to the airport. It didn’t go very fast, I was in a crappy Volkswagen Santana taxi doing about a 100 and we just blasted by. Still, this majestic Benz is on the road, and that is what matters most. May she run forever.