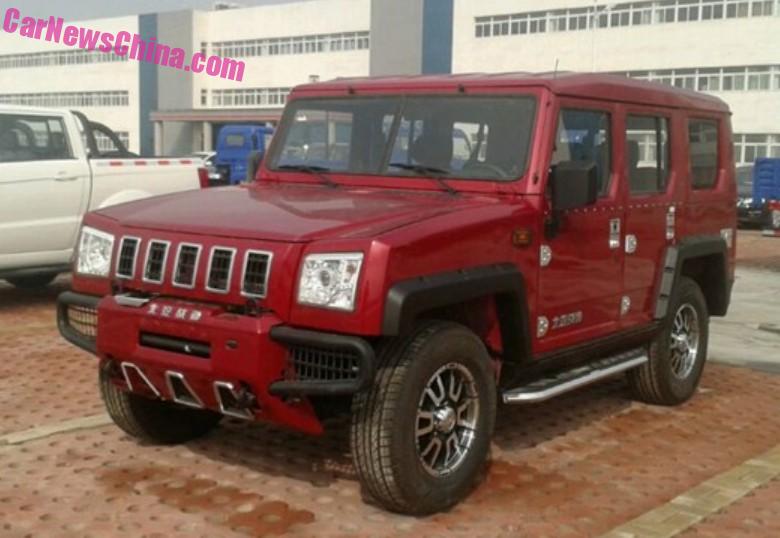 Sensational Spy Shots of a fiery red SUV with quite some Bling around. This is the Beijing Auto Zhanshen, a prototype-slash-concept for a true passenger-car variant of the Beijing Auto BJ2022 Yongshi (Brave Warrior). The existence of the project is interesting because Beijing Auto will soon launch the new BJ80 series, the semi-official successor of that very same BJ2022.

However. Beijing Auto is known for developing and building vehicles that overlap in the market, and for keeping antique cars endlessly in production. Heck, they still make the original BJ212! A somewhat new variant of a car that is otherwise scheduled for succession is thus not entirely out of fashion for the Beijing boys.

This is the BJ2022JC, JC being the designation for the military variant. Lone engine is a 3.2 liter turbo diesel six with 140hp. Originally, this engine was sourced from Nissan but later on manufactured by the Dongfeng Chaoyang Diesel Company. The BJ2022JC exists in many variants, including three-door, anti-riot, and badass-armored.

The BJ2022 series is manufactured by Beijing Auto Works (BAW), a subsidiary of the Beijing Auto Industry Corporation (BAIC), it was  developed with a lot of help from Chrysler, and it is in service since 2007. 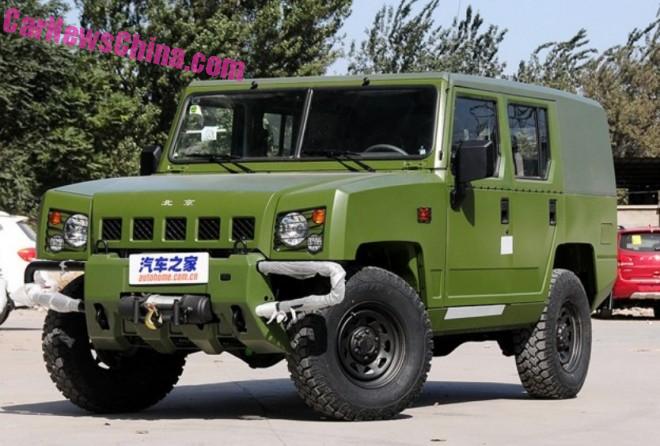 There is already a version for the civilian market, but it is basically the same vehicle as the base army version, bar for the engines. Price starts at 197.000 yuan and ends at 209.000 yuan.

The civilian Yongshi is presently available with a 2.5 liter turbo diesel four with 136hp, and with a 2.7 liter petrol six with 150hp. The latter replaced a 3.0 petrol six with 138hp that was available until 2011. Same gearbox for all: a five speed manual, sending power to all wheels. 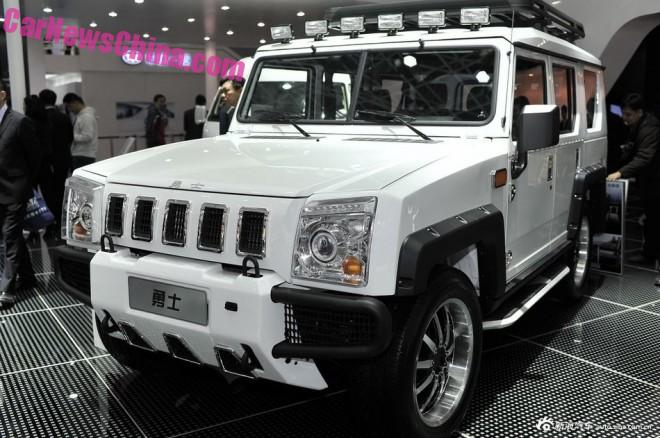 The Zhanshen was previewed by this virgin white concept car that debuted on the 2014 Beijing Auto Show. At the time it was simply called ‘Yongshi’, or Brave Warrior. Design seems otherwise the same as the red Zhanshen. The concept was powered by the 2.5 liter turbodiesel. 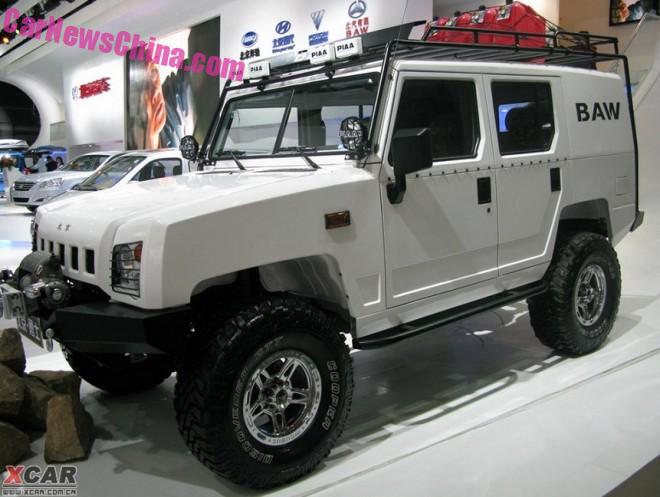 The desire to develop a real civilian variant of the BJ2022 started all the way back in 2009, when Beijing Auto showed off this white concept car on balloon tires and with  a big winch on the bumper. Nothing came of it at the time. 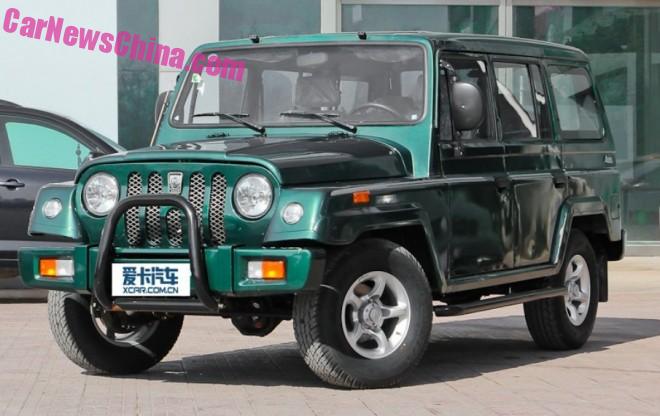 Price different seems huge but the Zhanshen will likely be much cheaper than the current BJ2022 Yongshi, because it won’t need all the military stuff and strongs. Price might start as low as 120.000 yuan. Then again, Beijing Auto might also decide to continue to Zhanqi anyway.

Zhanqi means ‘War Flag’, and that is cool and such, but Zhanshen beats all, meaning ‘War God’ (!!!), the best name ever for a vehicle, although it would go even better on a car with guns. 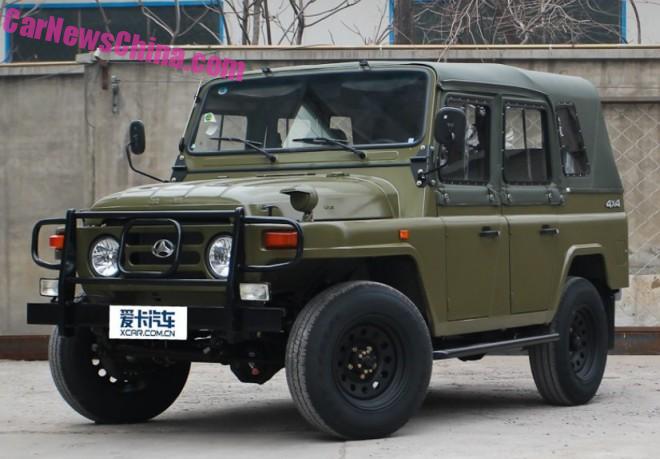 And here is the sweet BJ212, in production since the early 1960’s, and barely changed a bolt over the years. The army still buys them and the vehicle on the photo is the version for the civilian market, which is exactly the same as the army version up until the black-out light on the left-front fender. 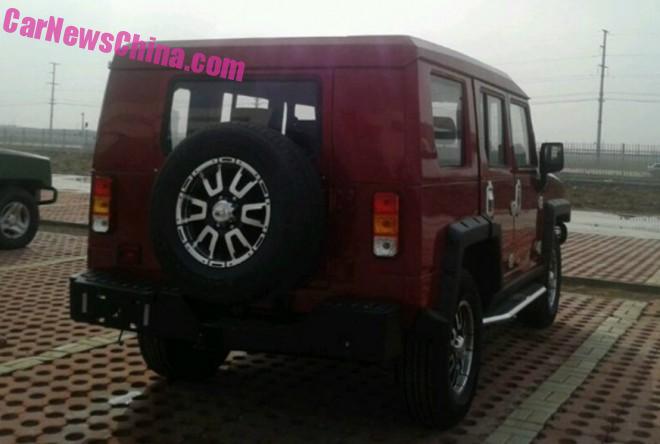 Back now to the Zhanshen. Rear window is very small because they didn’t change the military-style rear door, which is very narrow because the base military version is a hardtop-convertible. The Zhanshen has a fixed roof but kept the hardtop door. 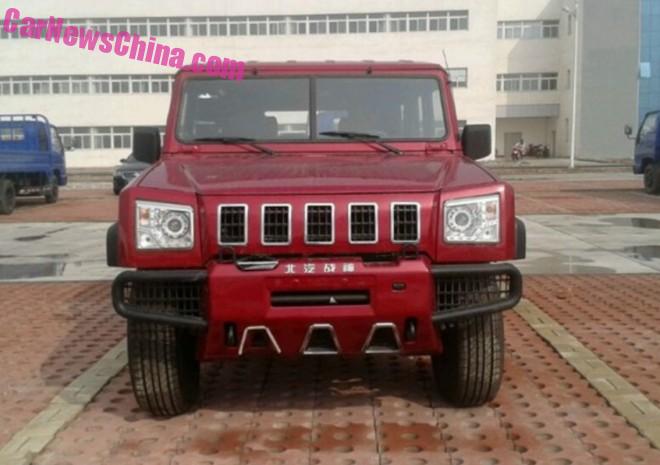 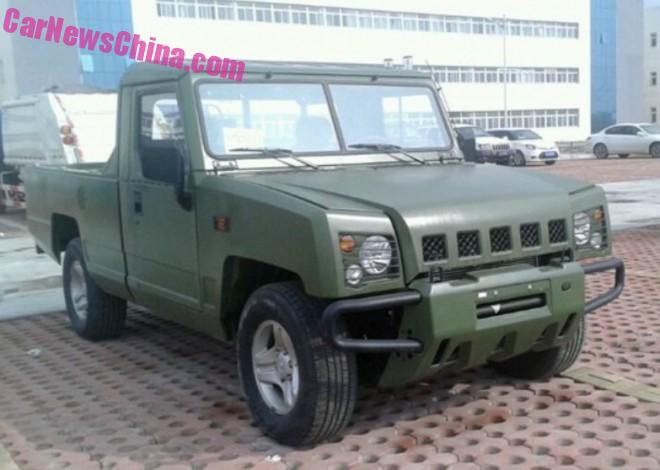 On the same parking lot this very nice and so far unknown two-door pickup truck variant of the BJ2022. It is painted in army green but looks very civilian-market. Not sure what it is, but it might indeed indicate that Beijing Auto is working on a whole series of civilian vehicles based on the BJ2022. 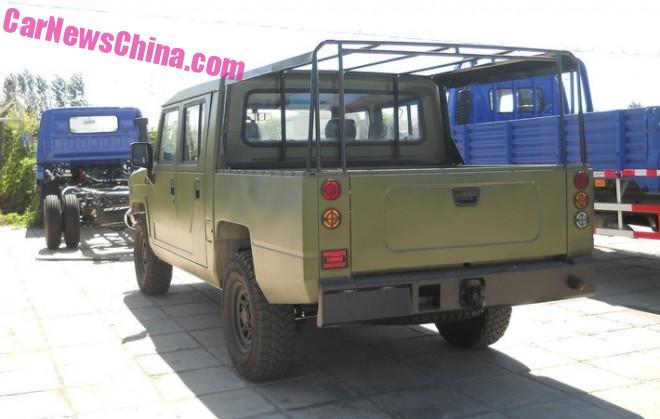 That idea is supported by the appearance elsewhere of another so far unknown variant; a four-door pickup truck with an extended bed. This particular example however has the military-style rear lights. 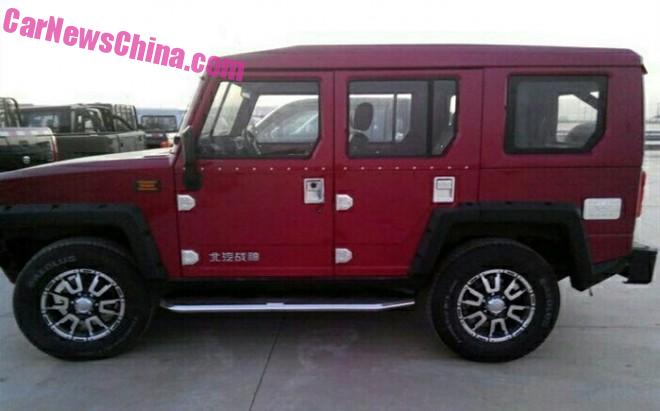 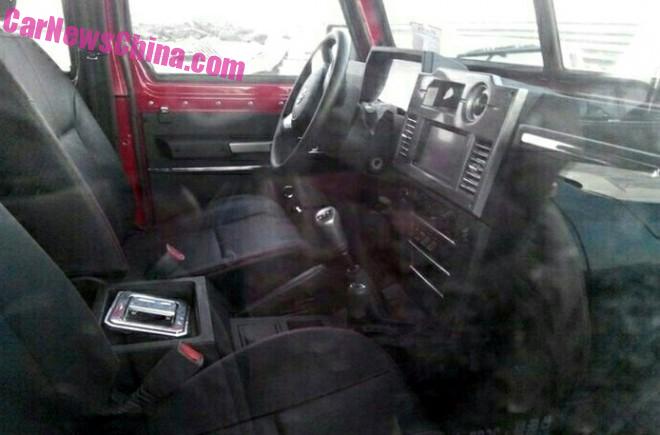 The interior is basically the same as in the BJ2022 Yongshi, but with a touch screen in place of the usual radio-CD player. 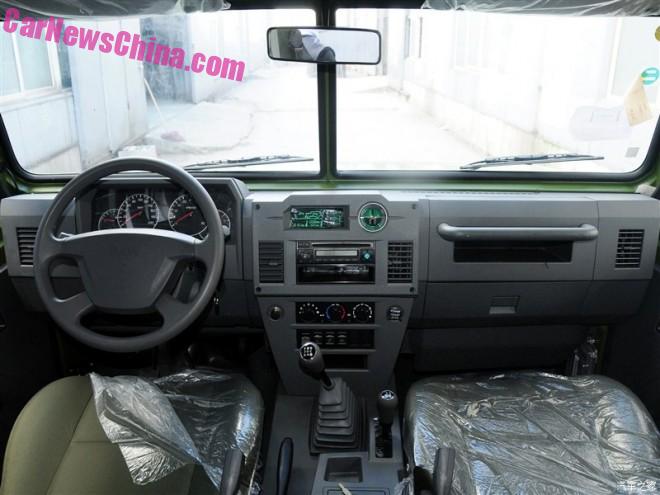 Interior of the BJ2022 Yongshi, civilian version, with army-green seats. 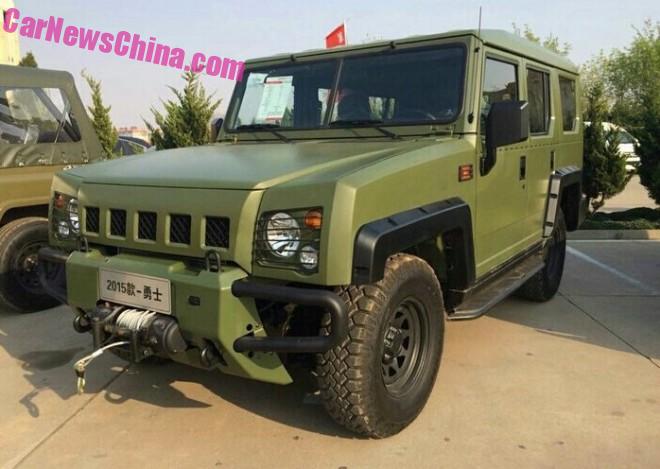 But that is not all yet…

Here we have another new version of the BJ2022 Yongshi, with the same black plastic over the arches and the same side boards as the Zhanshen. The vehicle is called ‘2015 Yongshi’. It seems very military in style with a winch, the basic black wheels, and without any chrome. 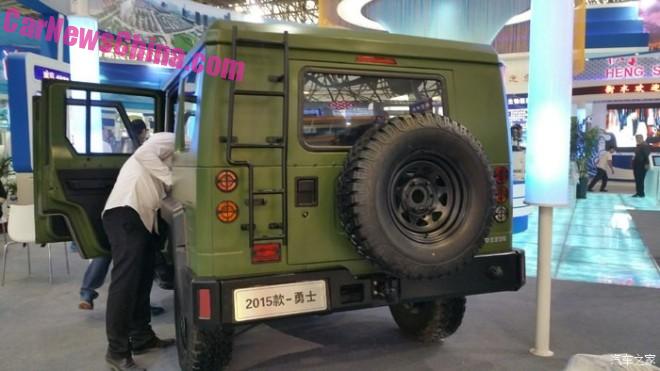 The same vehicle was also seen on a military expo in Langfang, with an odd ladder on the back. According to information provided at the show the engine was the 2.5 liter turbo diesel four with 136hp, which is currently only available in the civilian version, not in the military version. 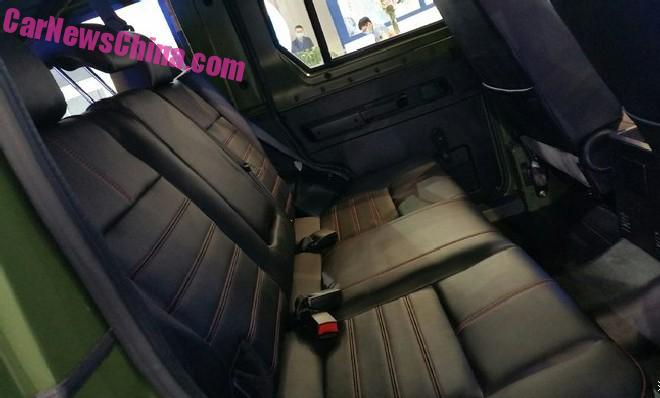 And this interior is fashionable by BAW standards, black leather with red stitching, definitely not military. 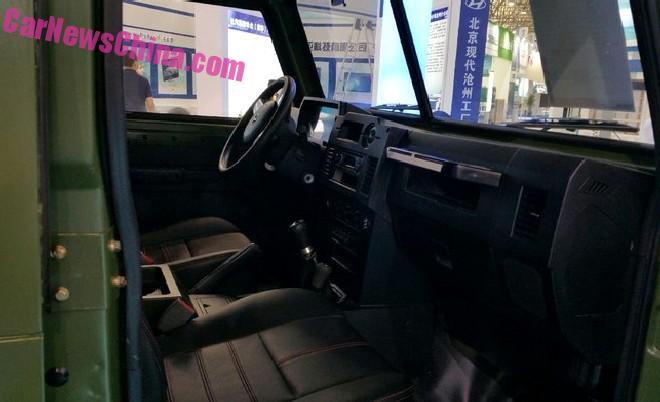 Front seats the same hip. Dash without the touch screen. 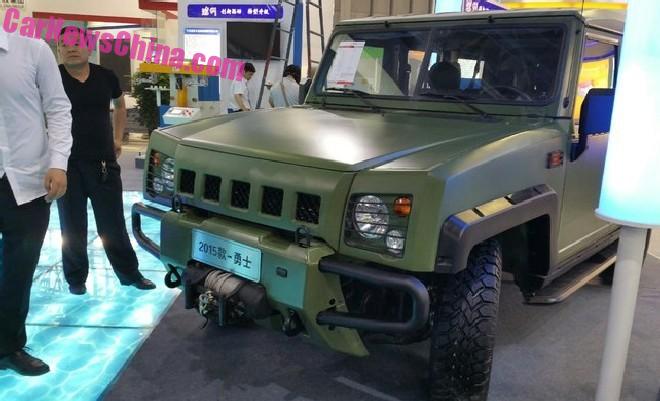 A confusing car. What is Beijing Auto cooking up here, and what else are they working on in their crazed laboratories? We will find out, one day…