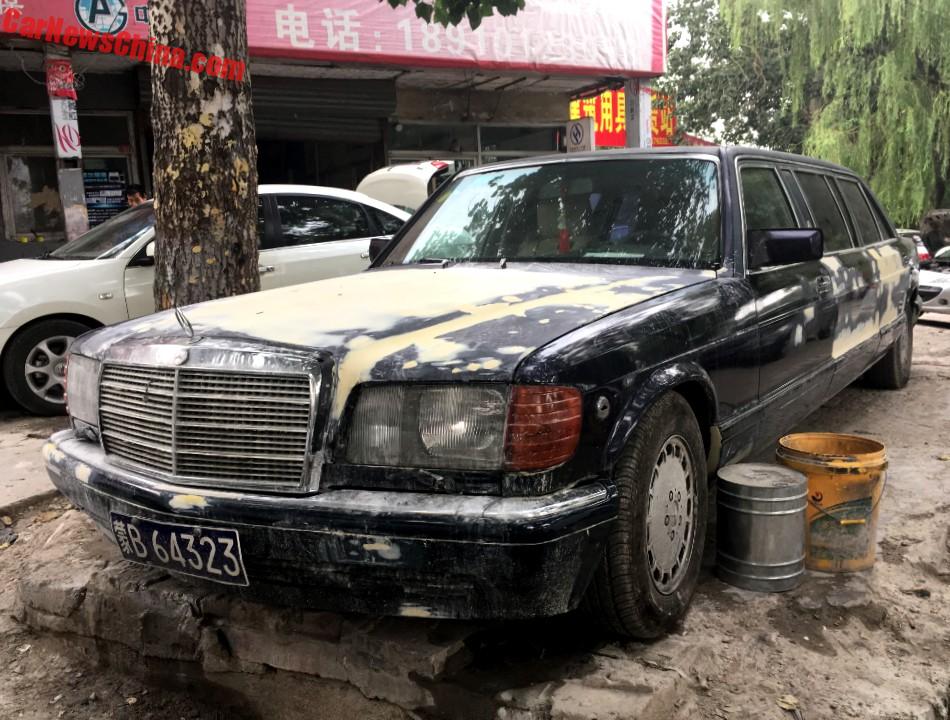 Here we have an ultra rare  Trasco 1000 SEL, a stretched limousine based on the W126 Mercedes-Benz 500SEL. There is a flag pole holder on the left-front fender, just behind the indicator, indicating this is an ex-government car.

I found the enormous machine standing outside of a rather crappy car repair shop just south of the Third Ring Road in Beijing. They said they were restoring it but I didn’t see much work going on. The paint was obviously in poor shape, but the body itself was fine, no rust or rot in sight, so a good new paint job will do miracles here.

The Trasco 1000 SEL was built by a German company called Trasco Bremen. They are still in business today, focusing mostly on armored cars. In the crazy 1980’s they made several stretched limousine variants of the S-Class and E-Class. The S-Class versions were extended with either 30 centimeters or 1.14 meters.

The company used inches (why?!) to differ the two versions. The shorter one was called the 1000SEL12 (extended by 12 inches) and the long one was called 1000SEL44. The Beijing car is a 44 and looks almost exactly like the dark blue car on this beautiful period factory photo. Trasco also built a more frivolous version for markets in the Middle East: 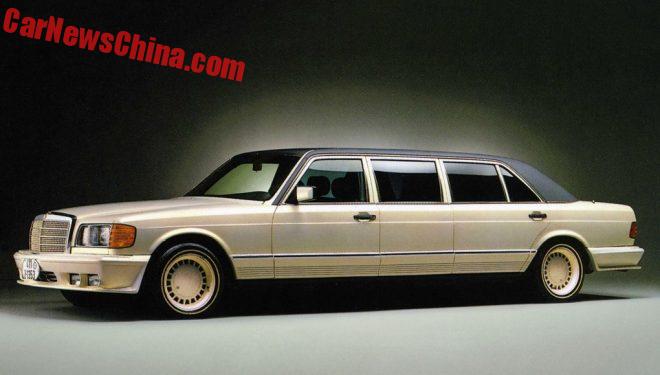 Looks very speedy. Where is my cocaine..? 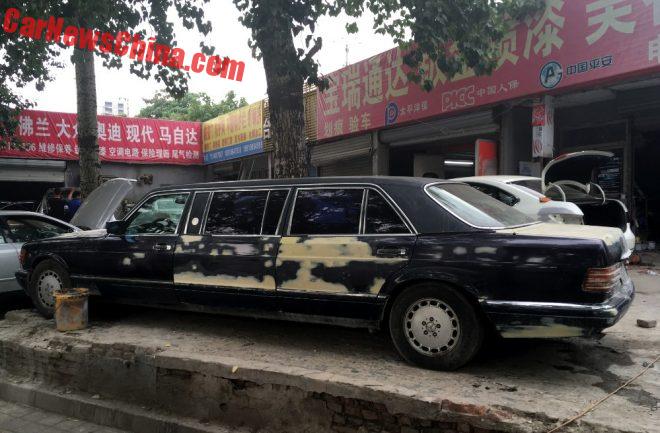 The wheel covers and vinyl roof are original and in good shape. It is really just the paint that is heavily damages. The shop owner told me the car was imported from Germany in 1985, and that he got it from a friend. How didn’t know any more, or he didn’t want to tell. The Chinese government, central or local, has a thing with stretched Mercedesses, they bought ‘m by the shiploads, especially in the 1980’s and 1990’s. The city of Shanghai for example had a fleet of 11 W140 Pullman limousines. 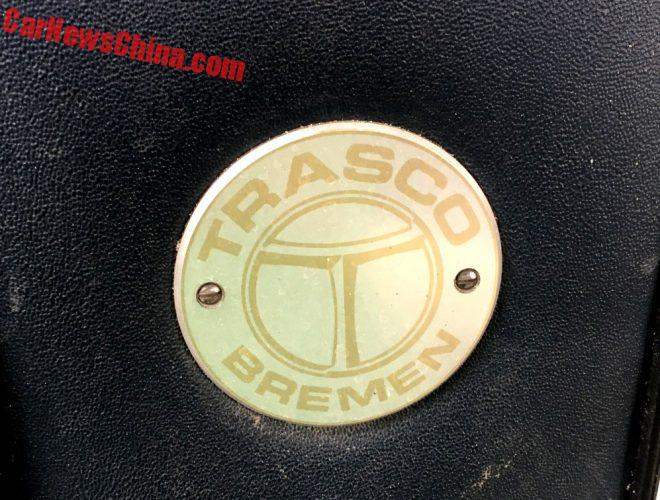 The Trasco Bremen badge on the B-pillar. 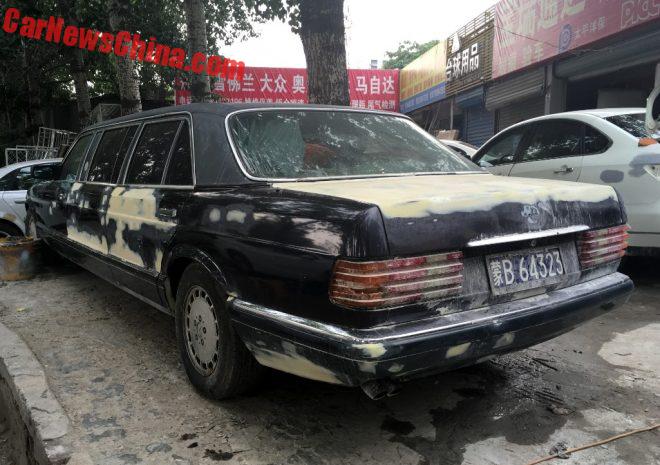 License plate is from Inner Mongolia Province. The plate looks as old as the car, so it seems likely this Trasco was once used by a local government there. However, I don’t know how many times the car changed hands since 1985 so I cannot be sure. 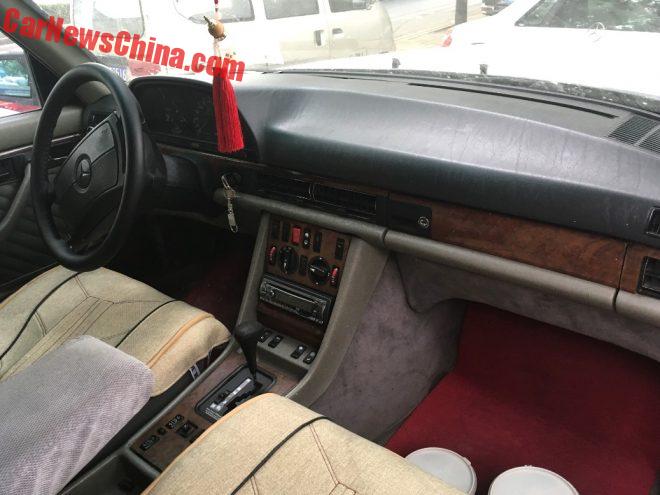 They were kind enough to open the doors. Dash was in very good shape. Clearly well maintained. Sadly, the radio-CD player is not original. The leather seats were were a bit worn and covered with protective seat covers. The red carpets too are covering the originals, which looked acceptable. It had just over 90.000 kilometer on the clock, which isn’t much at all for a W126 S-Class. Keys were in the hole and the owner started her up. The engine coughed a little bit and then ran as smooth as silk. The 500SEL was powered by a 5.0 V8 with 237hp and 402nm, the engine was mated to a four-speed automatic. 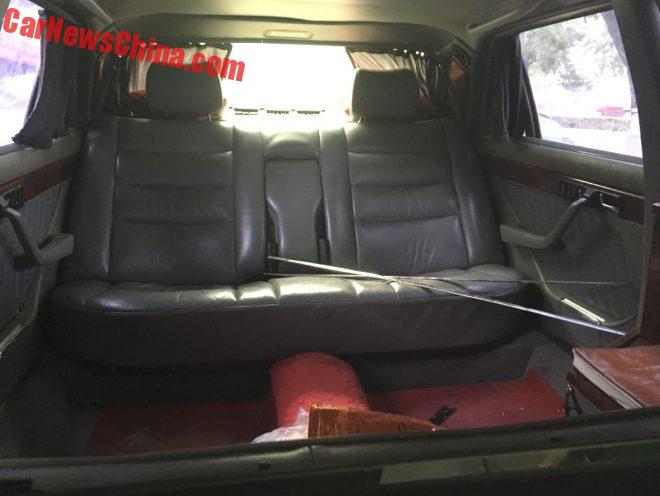 The glass divider was down and the curtains were open, making for a clear view into the rear compartment. There are four seats, two very wide ones on the rear bench, and… 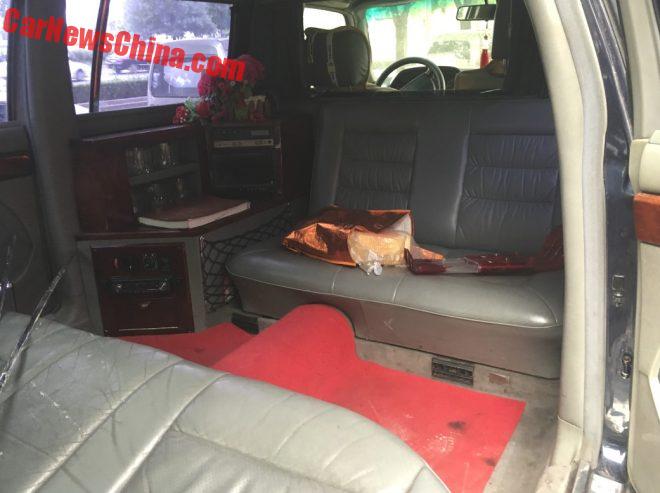 … two narrower seats on the small bench. The rest of the space is taken up by the mini bar slash entertainment system. The benches are uncovered, showing their worn original leather. There wasn’t any damage however so a good cleanup will get these benches back into shape. 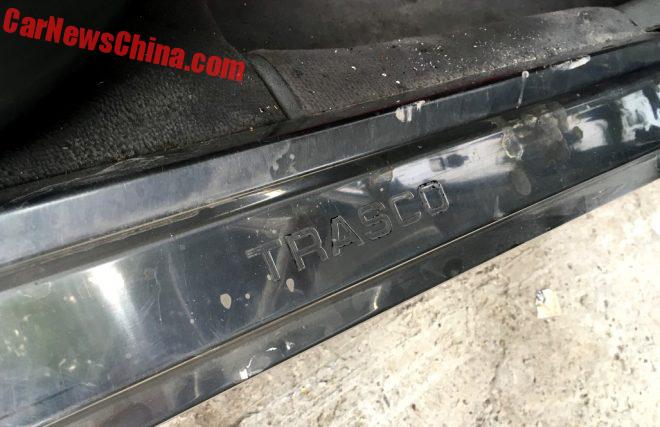 The Trasco name on the door sills. 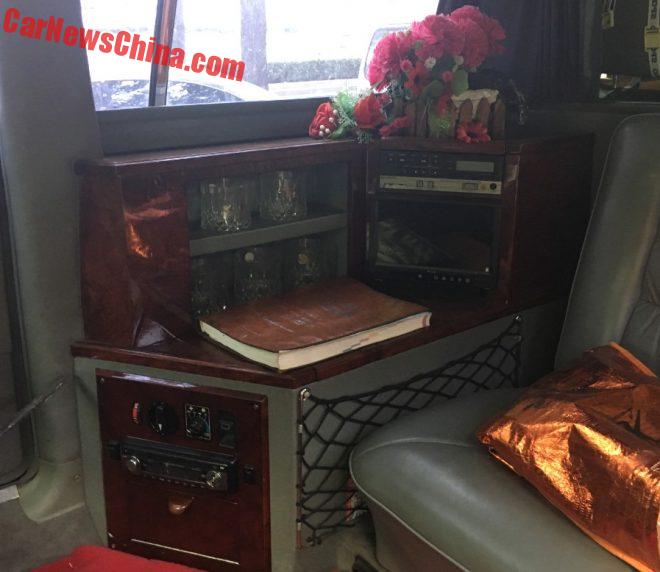 The wooden mini bar had plastic pink flowers on top, crystal glasses, a magazine bag, a television, a rather complicated TV-receiver device, and radio with a small storage cabinet underneath. Who said the 80’s didn’t have style? 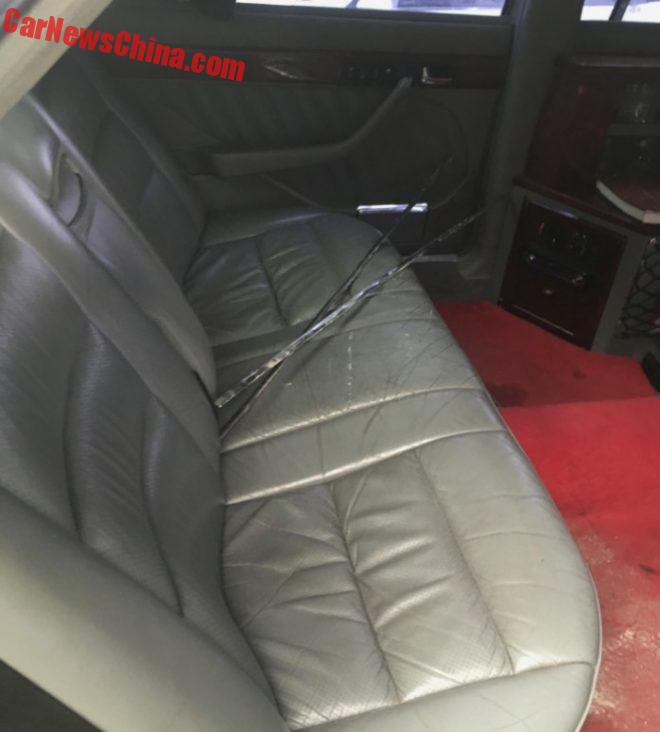 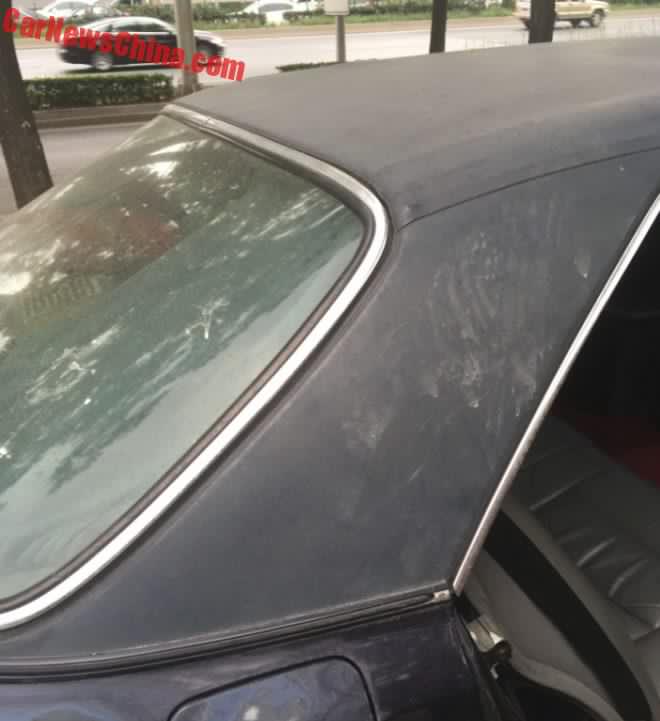 The vinyl roof needs a good cleanup too, but it is otherwise fine. Same goes for the chrome. But it is not good to leave a precious old car like this out in the open. Their shop was far too small to contain this Mercedes, so all they can do when it rains is cover it up. Happily, it doesn’t rain much in Beijing. 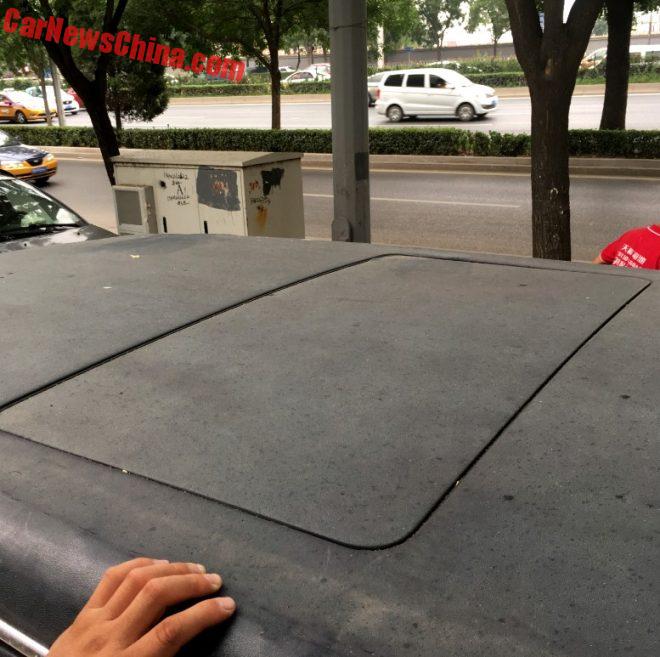 But just at that very moment it really started to rain, as you can see by the drops falling on the roof and sun roof. Staff scrambled to get all their open pots of paint and oil and whatever into the shop but they didn’t even care to close the doors of their Mercedes! 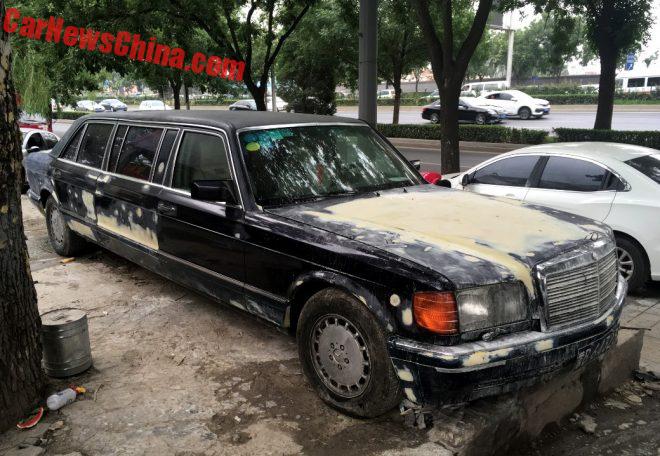 So I closed it. A majestic limousine. Those Inner Mongolian officials were very lucky… 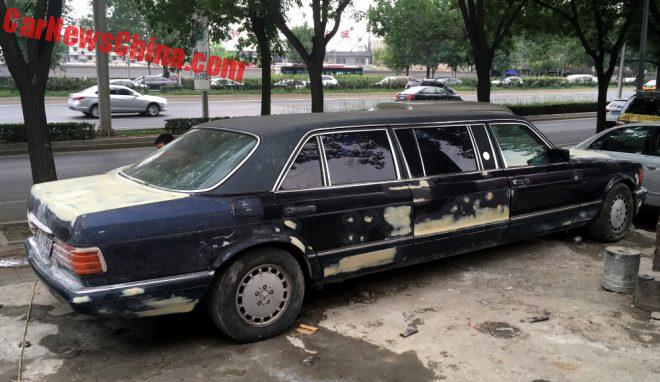 The rain stopped as soon as it had started and the hot summer air dried the drops away. The pots came out again and work commenced on the shitty Hyundai’s and such they had standing around. Nobody worked on the Trasco. 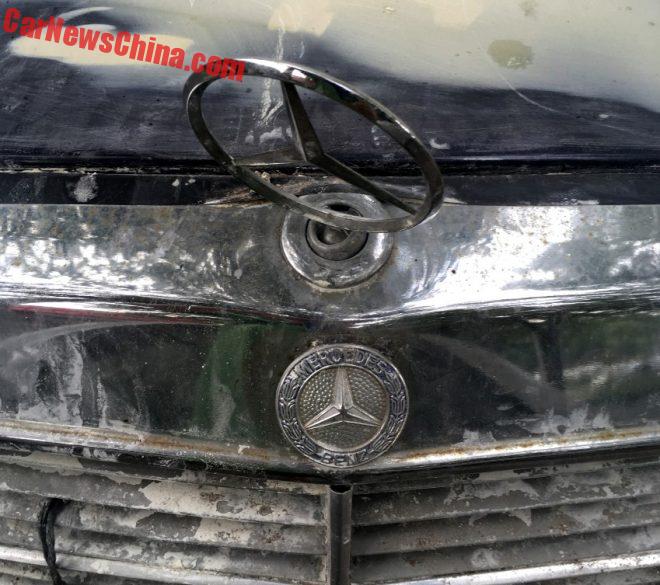 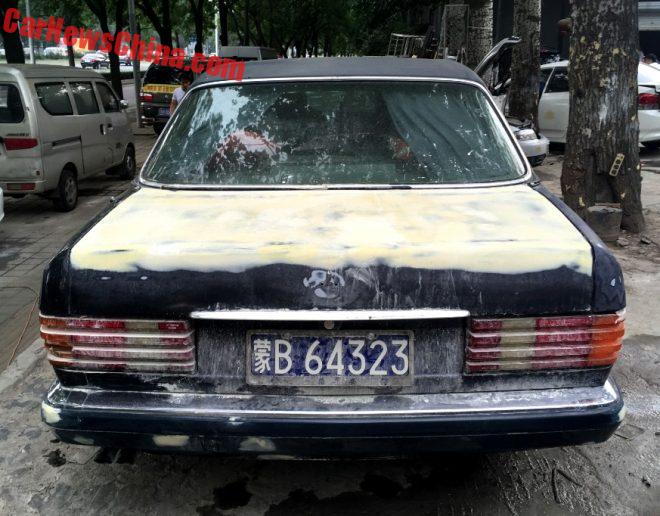 It was then time to go. The owner got a bit nervous about all my questions. Anyway, I will go back there when I am in the area again to check out whether they made any progress. I hope they will. This great car belongs on the road, wafting along with all its extra inches, powered by that big V8 under the hood.