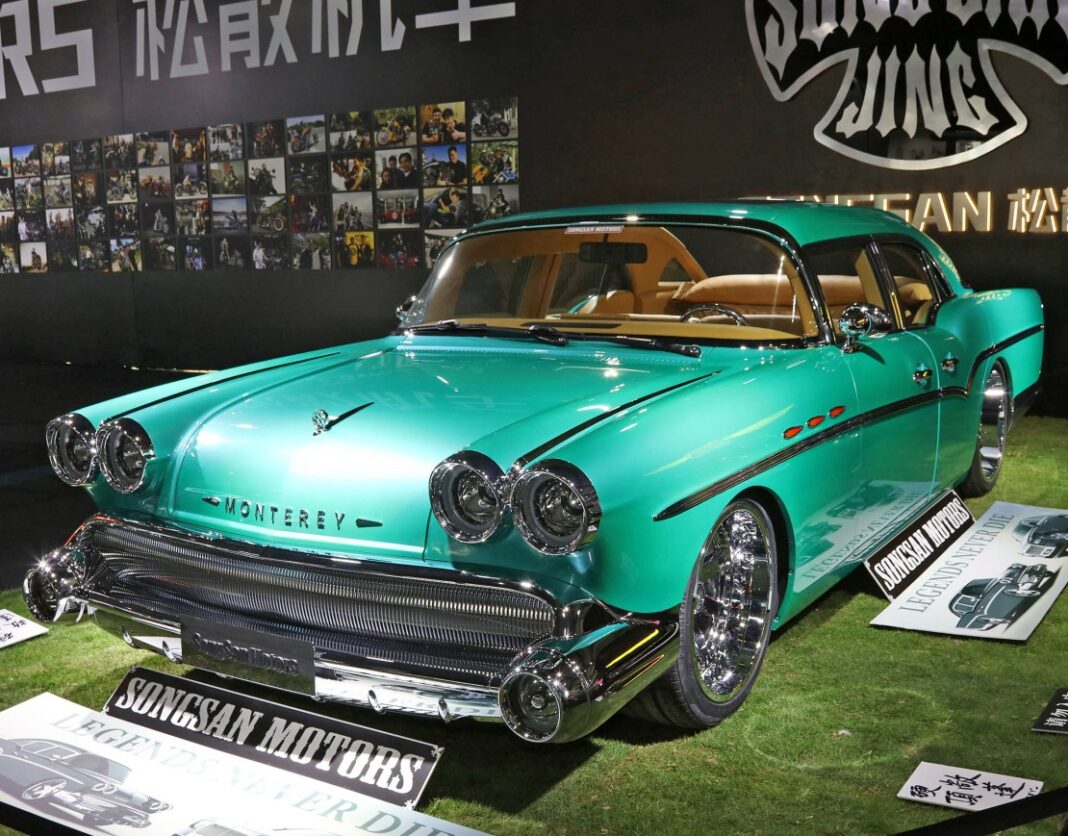 Songsan Motors is fast becoming one of our favorite Chinese automakers. They are nuts, and nuts in a good way. They are also very real: their first car launched on the market earlier this year. On the 2021 Guangzhou Auto Show in China they unveiled the new Songsan Monterey, a retro-tastic sedan inspired by the 1957 Buick Roadmaster.

Songsan Motors was born out of a Beijing-based motor club, originally founded in 1995. In the 2000’s the club went into business, trading and building customized motorcycles and classic cars. In 2019, they unveiled their first self-developed car, the Songsan SS Dolphin, with a design inspired by the C1 Chevrolet Corvette.

The Dolphin is in production and on sale. It is produced by BYD under a contract-manufacturing deal. BYD will also manufacture Songsan’s other cars. The platforms, power trains, software, and infotainment systems all come from BYD.

The company’s second car is the Songsan SS Summer, a cool van inspired by the original Volkswagen Microbus. Production is set to start next year.

Earlier this year, Songsan showed the GT, throwing overboard the retro design in favor of a more modern look, complete with scissor doors at the front. Whether it will see production is yet unclear.

With the Monterey, Songsan Motors goes back to its retro roots. It is a large sedan low rider with suicide rear doors and a Landaulet rear roof. Like the American cars of the 1950’s and 1960’s it is loaded with chrome and other shiny bits. The wheels are in hot rod style, low and almost too large to fit in the arches, with shiny multispoke alloys and red brake calipers. It is huge: 5180mm/2000mm/1490.

Unlike one may expect, Songsan isn’t some small operation sitting in the basement of the exhibition center. On the contrary, they had a large booth on one of the main halls, right across the isle from NIO. Note the odd image on the floor, depicting a Monterey and a Rolls-Royce Phantom, with the text “Legends will never die”. Now check this:

An umbrella in the doors, Phantom-style, with the Rolls-Royce logo on it. Perhaps Songsan’s next car will be inspired by a Roller..?

The Landaulet roof is very cool and great for in the summer. The show car didn’t have a roof cover, so how this works precisely is yet unclear.

The interior wasn’t quite finished yet but it looks interesting, mixing 3 modern screens with old school stuff, like the seat arrangements, the steering wheel, and the dashboard design.

Like its American examples, the Monterey has wide and very flat seats. The front looks like a bench but it are two individual seats with loads of space on every side.

The rear bench sits exactly between the wheel arches, so it is rather narrow. But it has a neck pillow. The design of the speakers, door handles, and the hand cranks for the manual windows (!) is nicely retro as well.

The Songsan Monterey will be available with two power trains, both from BYD: full electric and PHEV. The full electric will do 0-100 in 3.8 seconds, and the PHEV will be based around a 2.0 turbocharged petrol engine. No other specifications were announced at the show.

The SS Songsan hood ornament. More on the Monterey as we get it!