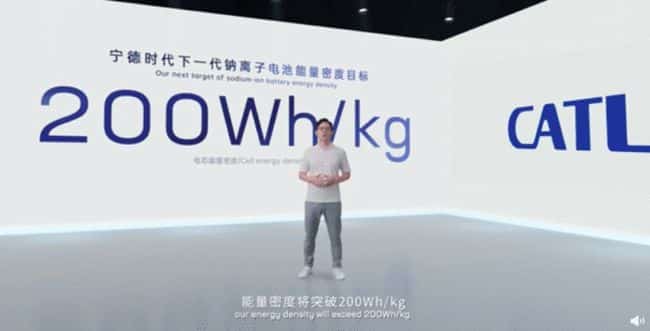 In July 2021, CATL developed its first-gen sodium-ion battery. Its single-cell energy density can reach 160Wh/Kg. It has an impressive fast charging capability, allowing it to get 80% charge just after charging for 15 minutes at room temperature.

Today CATL applied for a patent for anode-free metal battery technology, which Tesla’s Chinese battery supplier would use in the next generation of sodium-ion batteries.

For a better understanding, let’s see why sodium ion is in the center of attention for CATL and competing with lithium-ion batteries.

Sodium ions have a more significant volume and higher requirements for materials’ structural stability and kinetic characteristics than lithium ions.

Because sodium is three times heavier than lithium, sodium-ion batteries are likewise heavier, despite lithium accounting for less than 5% of a battery’s overall weight.

Because of the 0.3-volt lower cell voltage, sodium batteries lose roughly 10% of their energy density, making them less potent. This is partly because previous graphite anodes used in batteries absorbed far too little sodium.

The industrialization of sodium-ion batteries has hit a snag because of this.

For many years CATL has been spending a lot in its R&D to overcome these limitations. CATL has created a hard carbon material with a unique porous structure that allows extensive sodium-ion storage and rapid transport.

Implementing this technique will allow the battery energy density to be significantly enhanced from its natural state, with the next-generation sodium-ion battery’s energy density exceeding 200Wh/kg.