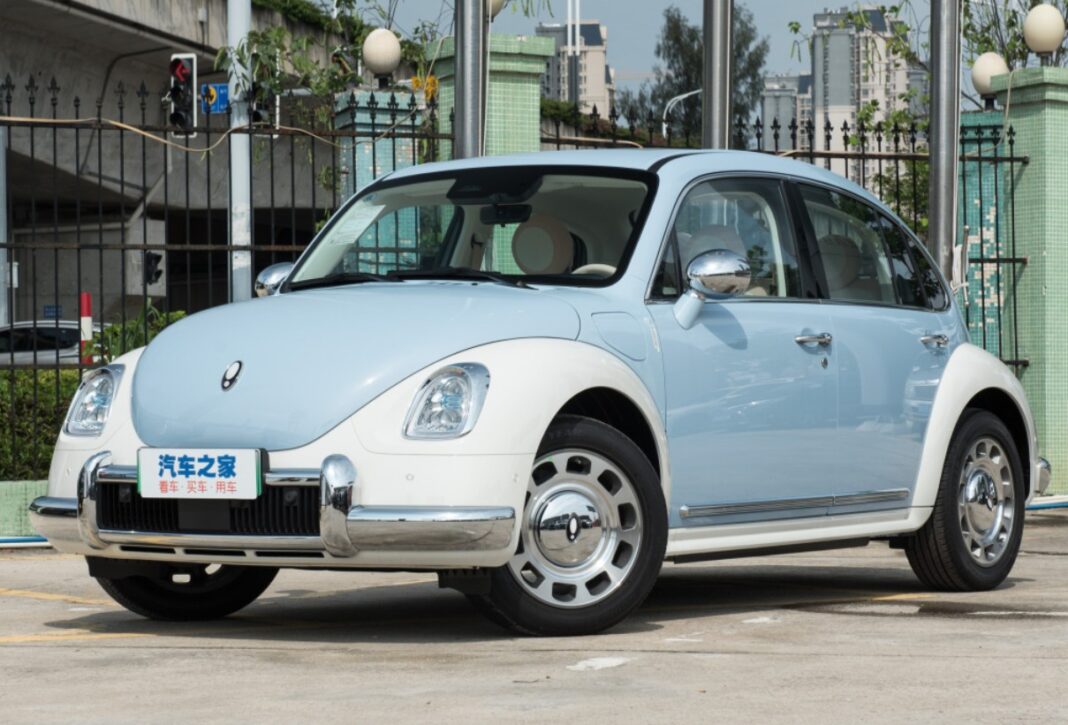 The hotly anticipated ORA Ballet Cat has been launched on the Chinese car market. The Ballet Cat is the car Volkswagen wished they had developed by themselves; a cool retro take on the original with all the drawbacks taken out. Instead, Volkswagen gave us the bulky ID.3, which is produced in China as well, but nobody seems to care or even know about that. They sure know about the new ORA Ballet Cat, possibly the most important electric car launch in China so far this year.

The ORA Ballet Cat is almost exclusively aimed at women, both in PR as in specifications. It comes in soft colors, with extra female-focused applications, and one truly bizarre feature aimed at reducing a women’s discomfort when she is menstruating. We will go into that in detail.

Design of the ORA Ballet Car is clearly inspired by the classic Volkswagen Beetle. The most obvious improvement over the original is the addition of an extra seat of doors. The motor is located at the front instead of at the rear, and the ORA is electric whereas the old Beetle was petrol powered. The third-side window on the C-pillar is fake.

ORA is a funky electric car brand under Great Wall Motors (GMW). ORA is also readying another Beetle-inspired electric car called the ORA Punk Cat. But that is a much larger vehicle, basically a big brother to its Ballet Cat sister.

The Ballet Cat is loaded with retro-tastic details, like the alloy wheels that stay close to the Beetle too. Oddly, the Ballet Cats stands on 18 inch Goodyear Efficient Grip Performance SUV tires. Perhaps this has to do with the curb weight of the car: 1780 kilo, which is steep for an electric hatchback and may explain the need for a sturdy SUV tire. The Ballet Cat is, however, larger than it seems: 4401/1880/1633, with a 2750 wheelbase.

The rear looks sweet with chrome colored bumpers, lights in chrome frames, and it even has a spoiler. The rear window is large which should be great for visibility. The LED light units are totally today, yet, due to their shape and frame they too have a nice retro vibe to them.

The interior totally continues the retro and pastel colored theme of the exterior. The wheel is large and round with an inner half-circle that operates the horn, just like on cars in the 60’s and 70’s. The materials and trim are of a good quality. The trim around the door handles and around the wireless charging pas look especially cool. The seats seem a tad too flat but the dual color design is classy.

ORA officially positions the Ballet Cat as an “an elegant car for women” with a “women-friendly configuration”. One interesting feature is a ‘Lady Driving Mode’ (Lady驾驶模式), aimed at making the car easier to operate for female folks. The mode includes: an automatic cruise control (ACC) that keeps extra distance to vehicles ahead, voice-controlled parking, voice controlled reversing, and a extra warning system for fatigued driving.

Then, there is a “Wind and Wave Mode”. When weather conditions change for the worse, the car automatically closes the windows, adjust the air conditioning, automatically adjust the lights/wipers, and further increases the distance to vehicles ahead when the ACC is switched on.

The please the ladies even more, the Ballet Cat is also equipped with a selfie-camera that can share images and movies directly to social media. The steering wheel is especially designed for women too, says ORA, in size and design, “in line with the width of women’s shoulders and the size of the palm of [a women’s] hand”.

Finally, the most bizarre feature. It is called “Warm Man Mode” (暖男模式) and developed to reduce discomfort when a woman is menstruating. ORA explains the reasoning behind this: when menstruating, one can feel cold and therefore panic. So what does Warm Man Mode do? It turns up the heating and the air conditioning with one-click, “to warm the body and mind”. The system can be activated via the main screen.

It all sounds so weird that some folks may think it ain’t true. But it is. Some extra proof just to make sure. All the information comes from ORA’s website, from a press release about the ORA Ballet Cat. This is the Chinese text decribing the feature: “生理期不用慌。一键开启“暖男模式”，座椅加热、空调等联动开启，温暖身心.” Screenshot:

While I am writing this, I am watching a live stream of the launching ceremony on my computer. One could expect a strong little lady taking center stage. But no. It is a very male-centered affair, with a bearded fellow in a brown jacket explaining the car’s features to a scantly dressed girl. To whatever he says, she says “oooh!” Watch it again here.

In fairness to ORA: now they got two ladies in the car, with the office worker explaining the various female-focused features to the ‘driver’.

One of the most eye catching interior details is the pod around the wireless charging pad. ORA calls it the “Swan Lake”, it is made of a crystal-like material that lights up with the ambient lighting system.

Right behind the Swan Lake sits a makeup storage compartment.

The Ballet Cat has two screens in one oval-shaped pod. But they are different in size. The left screen is for the instrument panel and the right one for the infotainment. Even here the soft-color theme continues with pastel blue and pink colors on the screen.

The drive selector is mounted on the steering column.

There us a large storage space and a single cup holder in the lower part of the center tunnel. The cup holder doesn’t seem very easy to reach. And what about the boyfriend, where does he put his tea..?

That’s the largest vanity mirror I have ever seen in a car, surrounded by an LED light. ORA calls it a “large-aperture makeup mirror”.

And the boyfriend got one too!

With a long wheelbase and the batteries under the floor, there is a load of room for passengers in the rear compartment.

The rear bench is pink-white too with comfy round headrests and pink safety belts.

The rear opens in fastback-style, with a large door going all the way up for easy loading.

A simple yet spacious boot.

Chromed bumper with a fog light in the middle-below.

ORA didn’t bother to add any under-the-bonnet design. The company likely decided that wasn’t worth the money as not many of the intended customers will ever have a look down there.

The charging point is located on the right front fender. The ORA Ballet Cat is powered by a single electric motor at the front. Output is a modest but usable 171 hp and 250 Nm. Top speed is 155 kilometers per hour. There are two battery packs to choose from: 49.93 kWh for a 401 km CLTC range and 60.5 kWh a 500 kilometer CLTC range.

The door handles are a retro masterpiece. It even has a keyhole!

All in all, the ORA Ballet Cat is an impressive piece of kit, especially for the intended customers. It looks great, it is loaded with kitschy stuff, and it has decent usable power. I like it a lot. Hopefully ORA will consider launching a manly version too; in red with sporty wheels and fake exhaust pipes. Until then, I happily leave the Ballet Cat to the ladies.