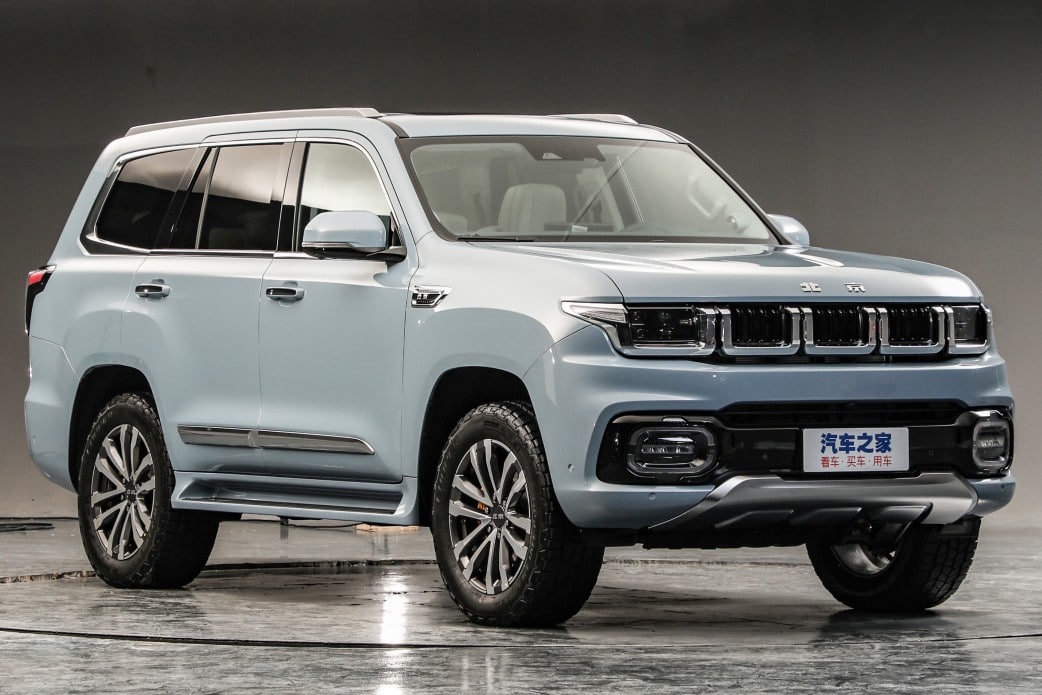 This is the new Beijing BJ60, a full-size SUV for the Chinese car market, set to launch later this month. The Beijing BJ60 is made by Beijing Off Road (北京越野), a subsidiary of BAIC. Beijing is the brand name, BJ60 is the type name.

The BJ60 will be positioned above the BJ40-series and below the high-end BJ90 SUV. Design is an interesting mix between original-Beijing, the Toyota Land Cruiser, and any Jeep. It looks strong and ready for ‘off road’, which it is, as the BJ60 is based on an old-school body-on-frame chassis. Its main competitor on the Chinese auto market is the Tank 500. Tank is a brand under Great Wall Motors (GWM).

Power comes from a 2.0 turbo + 48V power train, mated to an 8-speed automated manual, sending horses to all four wheels. It’ll do 0-100 in six seconds but details on power were not disclosed yet. It has 2H, 4H, and 4L modes, and nine driving modes. To get far in those empty off-road lands, the BJ60 is equipped with an 85L fuel tank and a 35L auxiliary tank. The latter is very interesting but sadly we haven’t seen any photos of it. Range is a claimed 1000 kilometers.

The interior looks very classy, and I really like the mountain-artwork in front of the passenger. The interior has a 10.25-inch LCD instrument panel and a HUD head-up display, a 12.8-inch central control screen, a digital rear view mirror, and a..:

… 1.92 inch start button screen. I have never seen that on any other car, and it looks super cool. the car starts up by touching the start icon. A very neat solution that we will likely see on other Beijing-branded cars in the near future.

Control switches for the 4WD system are positioned in front of the gear lever.

Loads of space of the passengers in the back. For extra entertainment, the BJ60 has a 256-color ambient light system and an audio system with 12 speakers and an amplifier.

This is the five-seat version, and as you can see there is more than enough space for a third row.

The front is typical BAW, with a 6-10 bar grille and the Beijing (北京) brand name on the hood.

The rear door is hinged on the right. It has a rear-view camera in the spare type cover, and a camera for the 360 degree view above the windshield. The Beijing BJ60 looks more than ready for a ride on the rough Chinese market. More on power and pricing as we get it.