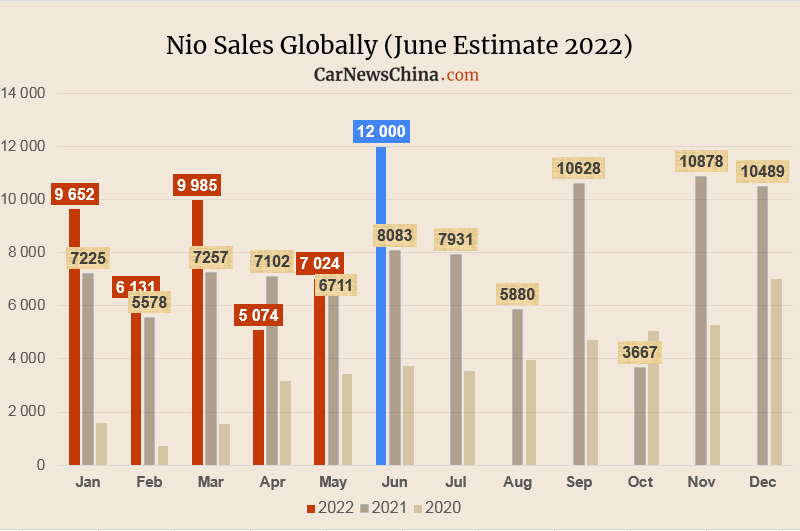 In what could be a new monthly sales record for NIO, the automaker hopes to deliver between 11,000-13,000 new vehicles in June alone. According to NIO’s first-quarter financial report for 2022 released today, the automaker revealed that they were able to ship 25,768 vehicles (a new quarterly record-high figure) during the period. This is 5,768 vehicles more than what the manufacturer delivered in the first quarter of 2021, representing a 28.5% increase in vehicles delivered. The company also confirmed it will launch a mass-market brand with deliveries starting in 2H 2024.

In the report, NIO also outlined its goal of delivering 23,000-25,000 vehicles in the second quarter of the year. In the last two months – April and May – the carmaker delivered 5,074 and 7,024 vehicles respectively.

If the manufacturer is to meet its 23,000 delivery target by the end of Q2, they must deliver at least 10,902 vehicles, while another 12,902 deliveries will take the total figure to 25,000 for Q2. In a bid to meet the milestone, NIO has collaborated with supply chain partners since the beginning of June to increase production capacity and step up the vehicle delivery process.

According to founder, chairman, and CEO of NIO, William Bin Li, the company received an all-time high inflow of orders in May 2022, and the ET5, which has been approved for production should hit dealerships in September 2022. The CEO further stated that the ES7 will be launched in June, and deliveries can begin in August. The ES7 is a new mid-to-large five-seater SUV based on NIO Technology 2.0 (NT2.0).

Speaking at the Q1 earnings call, Mr. Li also revealed that there was progress in the development and production of the new mass-market brand which should make its debut in the second half of 2024. The new models based on the NT3.0 technology platform should cost between 200k -300k RMB ($29,885-$44,827) and will be equipped with battery packs from NIO that support battery high-voltage fast charging technology.