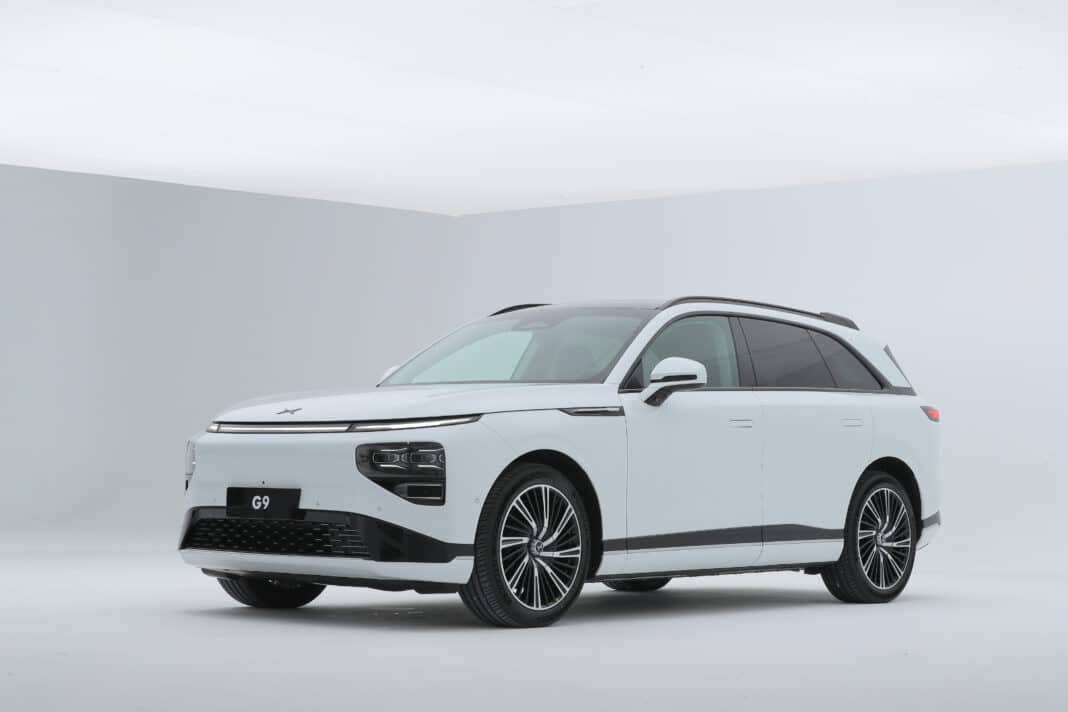 Xpeng’s fourth vehicle the Xpeng G9 was built from the start to meet European safety standards, firmly setting the companies aim to sell the G9 in Europe. I travelled down to Guangzhou to get a sneak peek at the brand new Xpeng G9 before it went to Chengdu Auto. We were able to record a quick overview of the car, and have already been told to expect a first drive in September.

The Xpeng G9 is a long-nosed, smooth SUV, aping the sporty styling from the Xpeng P7 sedan. Being an Xpeng it’s of course adorned with a lightsaber LED under the bonnet, with the headlights further down the front fascia. The blackened headlight surrounds are larger on the G9 than the P7 chiefly because they also house the lidar units.

Something the current P7 lacks. Moreover, the black lower fascia around the whole car doesn’t stretch all the way to the bottom like it’s sedan brother, rather being broken by some white trim. Personally I prefer this aesthetic as I was never crazy about the huge black lower fascia of the P7.

The side is mostly smooth following the front end design, complete with the standard Xpeng pop-out handles. The belt-line is extremely flat, with the whole cabin push back behind the rather long nose. The roof dives into a wide D-pillar giving the illusion of a sporty coupe roof without an extreme drop. The LED taillights wrap around the rear end, while the lightsaber at the front reaches back into the side. The headlights and lidar on full display. According to the Lead Exterior Designer the lidar placement in the bumper was chosen due to it’s improved FOV compared to a singular roof mounted lidar seen on most of its competition.

The rear unsurprisingly is as absent of creases as the rest of the car. The light bar at the back a totally new design for this new G9. A solid bar of light with some patterning underneath. There’s a hidden auto-deploying tow bar, most likely aimed at future European buyers.

Overall the design looks modern. The P7 has always been the stand-out design in Xpeng’s range. I hope the refreshed P7 takes a leaf out of the Xpeng G9’s style book.

Having spoken to the Lead Interior Designer I could tell you that the speaker grills use the Fibonacci design. Or the seat patterning is inspired by the Canton tower. But honestly it’s all a bit pointless.

What I can tell you is the material qualities in the Xpeng G9 blow the P7 out of the water. The Nappa leather seats both front and rear were soft, letting you sink into the seats a bit rather than being perched on top of them. The front seats are equipped with heat, ventilation and massage functions with the rear having heat, ventilation and massage on the top trim. However all models get the rear electronic reclining function. Combine that with the huge amount of leg & headroom and the rear is really a comfortable place to relax.

The two 19.96inch centre screens are crisp and responsive, both running Snapdragon 8155 CPUs. The centre screens do everything for you, there are no buttons on the dash or centre console. Luckily you can seamless switch the screens allowing both the driver and front passenger access to all the cars functionality.

The cabin is a big step up for Xpeng material quality wise, if not a bit generic. I hope Xpeng become more consistent with their interior styling because right now every model’s interior is seemingly wildly different. When the family resemblance on the exterior is so obvious, it remains a mystery why the interior is so unique.

Unfortunately I didn’t have much actual time with the Xpeng G9 to really drill down into the ins & outs of the tech. Hopefully when we visit in September for a drive of the Xpeng G9 I’ll be able to give a more informed opinion on how the systems work.

One of the big features for the Xpeng G9 is “Xopera”, an immersive media entertainment for the car. The 2250W 28 speaker Dolby Atmos 7.1.4 system with audio partner Dynaudio, takes care of delivering the spatial audio which has fast become the new standard on high-end in-car sound systems. But wait there’s more. Xpeng say the G9 gives a 5D experience. They’ve definitely tried to push the envelope.

The spatial audio works in combination with the air conditioning, in-car fragrance, ambient lighting & in-seat vibrations to “achieve” a 5D cinema experience. I can tell you that those things all play apart when watching the demo video, even if the demo’s full vibration setting made my butt a bit confused, as it violently vibrated whilst someone knocked on the door. I’m actually looking forward to trying this out at night when I have an XPeng G9 on a longer loan to really see how immersive it is.

There’s four zone voice assistant, and I still think Xpeng’s is by far the fastest one out there at the moment. Able to understand an execute commands, what feels like twice as quick as everyone else. It flawlessly understands my less than flawless Mandarin every time so big big props for that.

Obviously with the Lidar, CDC & Air suspension the Xpeng G9 will be able to anticipate road conditions and adjust the suspension accordingly to improve ride comfort. We’ll have to wait until next month’s drive to see how well it works. Xpeng also claims the G9 has best in class NVH.

Xpeng has already demonstrated it’s new 480KW charging, stating it will add 200km (CTLC) range in just 5 minutes. The stat I find more impressive is it’s ability to charge from 10-80% in 15mins. We suspect that is for the 98kWh lithium ion battery pack. How fast will the 78.2kWh LFP pack charge, we’re not too sure.

There’s one major point that I’ve been quite about, and that’s the Xpeng G9’s ADAS features. Simply because not much information is really available. We know Xpeng are saying it will be “Start to Park” ADAS, meaning it will go from driving in car parks and slow moving traffic switching seamlessly into city & highway NGP. How much will be ready for launch we don’t know. It will of course have all the ADAS features current working on Xpilot 3.5 at least. And we know Xpeng is currently testing the P5’s City NGP in Guangzhou, but apart from that not much else. We can guess that Xpilot will become a big selling point of the G9 as it has been with every Xpeng model so far.

Overall the Xpeng G9 is a handsome SUV that’s taken a much need step up in material quality. We know it will have the ADAS features Xpeng’s are known for. However, it is a massive 5-seater swimming with 3-row SUV competition. Obviously Xpeng thinks the market wants a large 5-seat SUV with a boot able to carry four golf club bags. Only time will tell if their right. Oh less that four seconds to 100kph, how much less, we’ll have to wait until next month. We are preparing the full review soon so stay tuned.