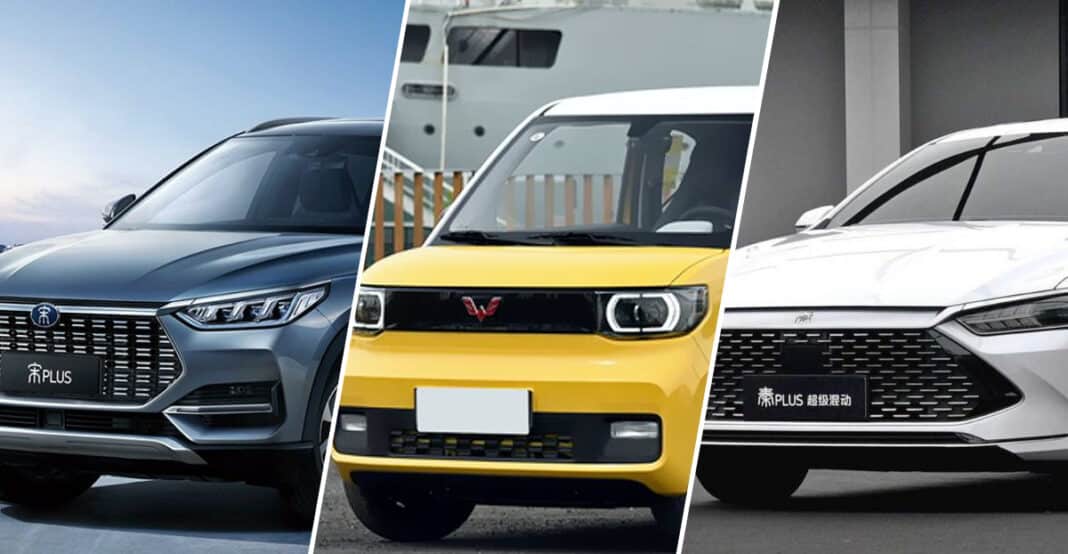 Furthermore, the total sales volume was 2.42 million vehicles, a month-on-month decrease of 3.3% and a year-on-year increase of 29.7%, with passenger vehicles accounting for 2.174 million units, up 40% year-on-year.

The Song Plus is a crossover SUV manufactured by BYD. Initially, only an internal combustion engine version was offered, then an all-electric variant was developed equipped with BYD’s lithium iron phosphate-based Blade battery.

The BYD Qin Plus was first unveiled at the 2020 Guangzhou Auto Show on November 20, 2020. It is equipped with a Snap Cloud-plug-in hybrid 1.5L high-efficiency engine with a maximum power of 81 kWh, peak torque of 135 Nm, a top compression ratio of 15.5:1, and maximum thermal efficiency of 43%.

BYD calls the design language “Marine Aesthetics”, and it will be used on a series of new semi-premium electric cars, of which the Dolphin is the first. Size: 4070/1770/1570mm, with a 2700mm wheelbase.

The BYD Yuan Plus uses BYD’s Dragon-face 3.0 design language, giving the crossover a clean, flowing design unique in the world of compact crossovers.

The Aion Y is equipped with a permanent magnet synchronous motor with a maximum power of 135kW and a peak torque of 350Nm. Its battery energy density is 184Wh/kg, power consumption is 13.8kWh/100km, and NEDC range is 600km.

The Tang is a plug-in hybrid crossover utility vehicle. It is equipped with BYD’s 86.4kWh Blade battery and can achieve acceleration from 0-100km/h in 4.6 seconds.

The Li ONE is a luxury mid-size PHEV crossover SUV manufactured by Li Auto. It is equipped with a 140kW rear-drive electric motor powered by a 40.5 kWh battery pack and an 11.9 gallon (54 liters) fuel tank for its 1.2-liter turbocharged internal combustion engine. The combustion engine also generates electricity to charge the car battery. The official price starts at 338,000 RMB (52,762 USD).