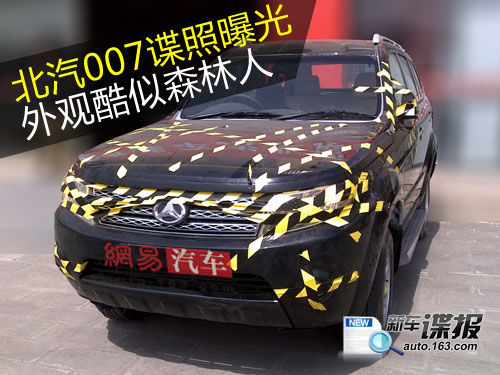 Yesterday we saw a very old picture of what some Chinese websites said was the new BAW (Beijing Auto Works aka Beiqi) 007 suv. We had our doubts and those today seem right with another picture of what could be the new BAW 007. It shows a partly camfouflaged car with the BAW-logo on a modern front. It isn’t the old Jeep and it isn’t the new B40 because that one has only two doors.

There is only one strange thing with this picture: the steering wheel is on the wrong side. Could be mirrored, the characters on the numberplate are from some Chinese website and added later. Maybe BAW plans to export it to some country where one drives on the left, like England.

Rumors also say BAW will show two concept cars based on the Saab 9-3 and (old) 9-5 platforms they bought from GM before Spyker got the rest.