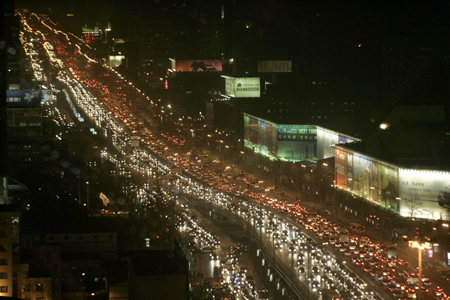 Vehicles without local license plates will not be allowed to enter Beijing’s urban area within the Fifth Ring Road starting from today – the first day back at work following the New Year holiday.

Under a new policy from the Beijing Traffic Management Bureau aimed at easing the city’s traffic gridlock, vehicles with non-Beijing plates will need a special passport-type document to enter the urban area during the busy periods of 7 am to 9 am and 5 pm to 8 pm on working days.

In addition, local license plates are blocked from entering the urban area on one working day in five according to the last number on the license plate. That scheme has operated for the past two years. It will also be expanded to include non-Beijing license plates.

The bureau said the punishments for those flouting the rules will be stricter. If a non-local car enters the area inside the Fifth Ring Road during rush hour, the driver can be fined immediately and fined again if he fails to return to the road along a designated route.

The traffic bureau also announced this week that it has added another 1,084 traffic monitoring cameras to watch out for vehicles breaking the traffic management rules.