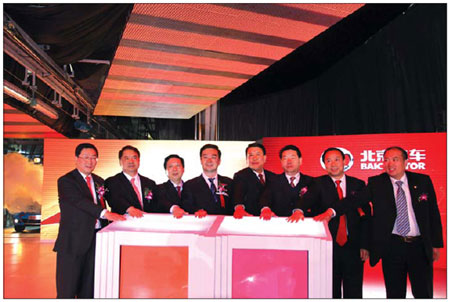 CHANGSHA – On Dec 26, the 107th birthday of Mao Zedong, Beijing Automotive Industry Corp (BAIC) inaugurated a new plant in the late leader’s home province of Hunan to produce its own cars under the brand Beijing.

The first model made at the 530,000-square-meter Zhuzhou facility will be the compact BC301Z. Construction on the plant began in the summer of 2009 with a first-phase investment of 2.5 billion yuan, which is projected to rise to 5 billion yuan.

The plant will mainly produce small cars, crossover passenger vehicles like the BC306Z and engines. It is designed to have a production capacity of 200,000 vehicles and 200,000 engines.

BAIC picked Zhuzhou as the site to make its first self-owned brand in part due to the city’s location along convenient transport links between coastal China and western provinces.

One of the country’s earliest industrial cities, Zhuzhou also has a developed manufacturing foundation and a relatively complete industrial chain.

Zhuzhou and the surrounding area have 140 auto parts makers, some 70 percent of the province’s total.

As well, a number of research and development centers and colleges in the city provide needed human resources for the automotive industry in the region.

“The Zhuzhou production base has great significance for BAIC’s development,” said Xu Heyi, president of BAIC Motor Group. “It marks a milestone for BAIC’s own brand passenger vehicles.”

Self-developed local brands are becoming increasingly important in the small car segment. Their market share has risen from 31 percent in 2008 to 49 percent today.

The joint-venture partner of Daimler Motor Co to make Mercedes-Benz in China and parent company of the nation’s No 1 truck maker Beiqi Foton Motor Co, BAIC’s revenues and profits outweigh domestic competitors such as Changan Motor, but the company lags far behind Changan’s sales of small vehicles.

The Zhuzhou facility will further complete the company’s product portfolio and help it grab a larger share of the self-owned brand segment, according to a BAIC statement.

As the pilot product of the new plant, the BC301Z targets those born in the 1980s, a generation willing to try new things, the company said.

BAIC has been in Hunan province long before building its Zhuzhou facility.

In 1999, Foton built a factory in Changsha, capital of Hunan province, that has since produced more than 500,000 trucks.

The company is now planning to expand the plant into the biggest truck maker in South China.

Construction on a second BAIC car plant in Zhuzhou with a capacity of 400,000 vehicles – including electric cars – is scheduled to begin in 2011.

The Hunan government said the province will have vehicle production capacity surpassing 2 million units and sales revenue reaching 300 billion yuan in 2015, making it the seventh-largest center for the auto industry in the nation.

BAIC’s goals are also lofty. The group aims to be one of the top 15 automakers in the world and listed among the top 500 global top companies by the end of 2015.

Its plans call for sales of BAIC’s owned branded cars to reach 700,000 units by 2015 and eventually have a 50 percent share of the own-brand auto market in China.