China’s BYD looks to US market to boost profile 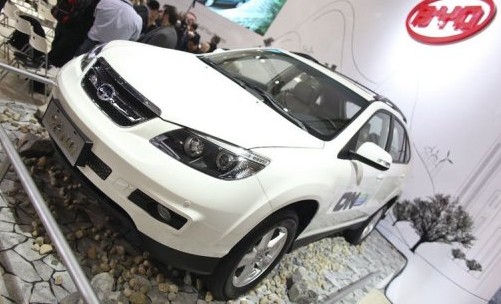 DETROIT, Michigan — China’s BYD is looking to the launch of its electric vehicles in the US market as a way to boost its reputation with customers at home, a top executive said at the Detroit auto show.

“It’s more branding – you want to be able to meet the US consumer’s expectations,” Mike Austin, vice president of BYD – or Build Your Dreams – America, said Monday. “If you make it in the US, you make it anywhere. We definitely will sell more vehicles in China if the US brand is strong.”
BYD recently introduced a test fleet of its F3DM plug-in hybrid and plans to begin sales to retail customers in the beginning of 2012.

That will likely make it the first Chinese automaker to sell cars in the United States, and Austin said BYD does not underestimate the challenges it faces in winning over the “finicky” and highly competitive market.

“We’re in no rush to launch bad vehicles in the US market,” Austin told reporters on the sidelines of the auto show.

BYD delayed the introduction of its E6 fully electric sedan after initial feedback showed it was not ready for the US market, Austin said.

One significant problem was that there was a higher step in the back seat – something which didn’t bother Chinese consumers, but which BYD learned would annoy Americans.

The vehicle has been redesigned with a flat floor and is expected to be introduced to fleet customers next year and retail customers at the beginning of 2013.

Early feedback on the new F3DM — which was unveiled in Detroit before it was shown in China — is good, Austin said.

The compact sport utility vehicle can run all-electric for 60 kilometers (38 miles) before switching over to a one-liter gasoline engine for a combined range of over 500 kilometers (313 miles).

It also comes equipped with a roof-mounted solar panel.

“We are delighted with the quality and performance,” said Rudolf Montiel, president of the Housing Authority of the City of Los Angeles, which leased the first fleet of 10 F3DMs.

The vehicles are “user-friendly” and have cut fuel costs for the housing authority by 73 percent, Montiel said at a press conference.

But analysts question whether BYD and other Chinese carmakers will have the same success in winning over retail buyers.

Overcoming quality concerns will be a big problem, particularly in the wake of a series of high-profile safety recalls of Chinese products like children’s toys made with lead paint.

“The execution is not at a level to fit with this market,” said David Cole, chairman of the Center for Automotive Research in Ann Arbor, Michigan.

“It’s hard to find a niche where (Chinese automakers) could come and create a position.”

Another problem is the sheer geographic enormity of the US market and the complexities of establishing a dealer market and service centers, said Rebecca Lindland, an analyst with IHS Automotive.

“It’s hard to try and regionalize your brand, because what happens if somebody moves? A car isn’t like your TV set that you’re just going to buy a new one.”

However, Lindland expects Chinese manufacturers to ramp up sales much faster than their Korean predecessors.

“One thing the Chinese do very well is that they learn vicariously through others,” she told AFP.

Chinese automakers may also delay a major expansion into the United States because there is simply so much money to be made in their home market, said Jeff Schuster, an analyst with JD Power and Associates.

“Just like everybody else, the recession altered their plans and their timeline, but they’re still making a strong push to be global companies,” he said.

“The challenge is when you have the domestic Chinese market growing exponentially every year it’s difficult to just meet that demand, let alone look at mature markets.”