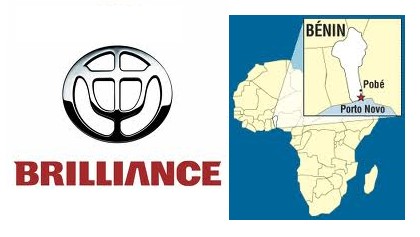 The deal will lead to the establishment of the largest auto plant in Benin in West Africa, with a total investment of 300 million yuan ($46 million), according to Teng Hexian, the chairman of Beijing Runfar.

Brilliance Auto, also known as Huachen, will hold 51 percent of the venture, while Runfar will hold 49 percent.

It’s expected that the plant will produce 50,000 autos annually, including sedans, minibuses and trucks, for sale across the African continent, said Teng.

The deal will be another step forward for Huachen in Africa, and follows on the establishment of China-Africa Huachen Investment Co Ltd last June, to promote the company’s sales and marketing in Africa.

The companies will head to Benin later this month for discussions with the country’s government, and to strike an official cooperative agreement. The deal, when finalized, will be the first overseas venture for the Beijing-based private investment company.

There are a number of reasons behind the project. “Benin is geographically well positioned and has good ocean transportation facilities, which will help the sale of products to other African countries. Also, the nation enjoys strong social stability,” said Teng.

The plant will be located in Cotonou, Benin’s economic powerhouse and also its largest city. Cotonou is also home to one of the largest ports in West Africa, with an annual turnover of 2.5 million tons.

Meanwhile, the city has established a transport infrastructure that facilitates trade with neighbors including Niger, Togo and Nigeria – which has the largest population of any African country.

“The plant will target all African countries, and not just Benin,” said Teng.

The Shenyang-based auto company is expected to provide technology and equipment to the venture, while the government of Benin will offer land and preferential tax incentives, but the details are still under negotiation, said Teng.

Benin is one of the least-developed nations in the world, and its economic growth has previously been dependent on agriculture and the production of cotton.

Prior to the global financial crisis, economic growth averaged about four percent annually, but fell to 2.5 percent in 2009 and 3 percent in 2010.

However, the country plans to attract more foreign investment by encouraging new technology and placing more emphasis on tourism.

China’s investment in Benin is relatively small, when compared with its involvement in South Africa and Sudan, and is mainly concentrated in the infrastructure, textile and agricultural sectors.

The China Economic and Trade Development Center, covering 7,000 square meters (sq m) and intended to facilitate investment in Benin, is under construction in Cotonou.

The Benin plant will be Runfar’s first overseas investment. “We are looking for more overseas opportunities and Africa is our priority market,” said Teng.

Runfar has assets worth 3 billion yuan, and has previously invested in petroleum, natural gas, real estate and commercial trade ventures across China.

Thanks to a large market and rising disposable income, Africa is becoming a hot spot for Chinese auto companies and their performance has generally been good so far.

Chery Automobile Co Ltd is now the fourth-largest auto manufacturer in Egypt by market share, with sales of 12,000 units in 2010.

In 2007, China set up an auto industrial park covering 40,000 sq m in Angola, the only site for auto manufacturing in the nation and also the first wholly owned Chinese auto plant overseas.

Meanwhile China’s automakers have developed a market share of more than 10 percent in Algeria over the past five years.