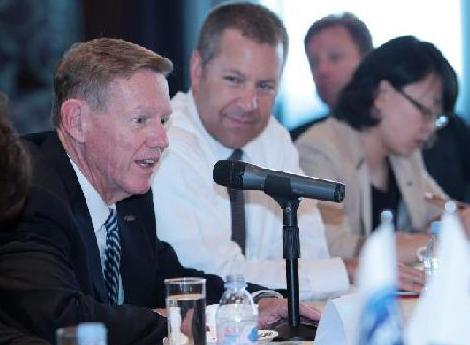 Ford Motor Co Chief Executive Officer Alan Mulally said on Sept 26 the company will introduce its best models and technologies to China in order to meet the demands of Chinese consumers. Like other automakers, Ford has increasingly focused its business plans on emerging markets, especially China.

He said he expects 60-70 percent of the increased sales to come from the Asia-Pacific region and Africa, and China will become the biggest engine of the company’s growth over the next decade.

Joe Hinrichs, CEO of Ford China, said the automaker plans to build seven factories in the Asia-Pacific region and Africa, including four in China. The company also plans to introduce 15 new models to China by the end of 2015 in order to tap the growing auto market.

Hinrichs said the three Ford-invested factories that are currently under construction in southwest China’s Chongqing Municipality will start operations by the end of 2013.

Chongqing will become Ford’s second-biggest production base after Detroit, with an annual output of 900,000 autos.

Meanwhile, the automaker is building a new factory with partners in Nanchang, the capital city of Jiangxi province. The factory is expected to produce 300,000 Ford and Jiangling cars.