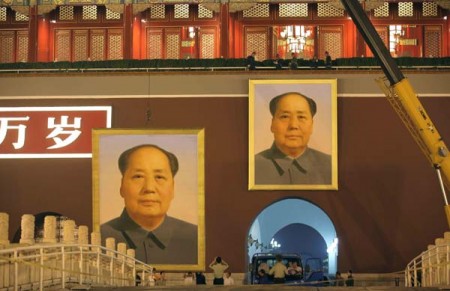 Tomorrow marks the start of China’s annual ‘October Holiday’. On October first the nation celebrated the founding of Communist ‘New China’ on October 1 1949. The rest of the week is a holiday which most people will use to travel around by train, plane, bus, car and whatever vehicle they can find.

State press bureau Xinhua expects 300 million people to be on the move in the first few days alone… News is always next to noting in those days so I will be on the move as well. See you all back next Thuesday. On pic workers changing Mao’s portrait above Tiananmen before the ‘masses’ will invade the square to celebrate their days off from work.