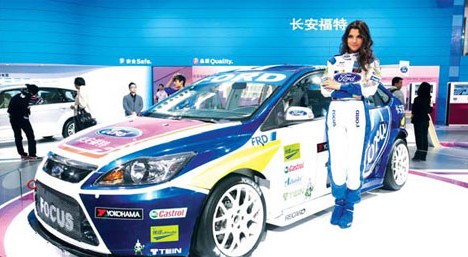 Ford Motor Co will bring 20 new engines and transmissions to China by 2015 to power the 15 new models it plans to introduce during the period.

The carmaker announced at the Guangzhou auto show last week that the new powertrains will include a 1.0-liter EcoBoost turbo engine that will be locally produced at its three-way tie-up with Chang’an Automobile Group and Mazda Motor Corp in the southwestern city of Chongqing.

The company said it aims to use the EcoBoost engine and PowerShift six-speed automatic gearbox in more models to achieve a 20 percent improvement in fuel efficiency across its entire fleet by 2015.

Ford’s sales in China increased 9 percent from a year earlier to about 427,000 vehicles between January and October this year.

The total included about 260,000 Ford-branded cars made at the joint venture with Chang’an and more than 160,000 commercial vehicles built at its partnership with Jiangling Motor Co.

Ford’s joint venture with Chang’an now has plants at its home in Chongqing and the eastern city of Nanjing producing the Ford Focus, Fiesta, Mondeo and S-Max.

Another factory under construction in Chongqing is set to be operational next year with initial annual output of 150,000 vehicles, including the next-generation Focus, Ford’s bestseller in the country.

Earlier this year the joint venture broke ground for a new engine plant and a new transmission plant, also in Chongqing, a hub city on the upper reaches of the Yangtze River.

The $500-million plant with designed capacity of 400,000 engines a year will begin production in 2013 along with a transmission plant with the same volume.

When all the facilities are complete in two years, Chongqing will become the second-biggest production site for Ford worldwide after its home in Detroit.

The aggressive moves come after years of modest growth in China by the US carmaker. Last year its sales in the country totaled 580,000 units while its US counterpart General Motors delivered more than 2 million vehicles.

Along with the new facilities, the number of Ford’s employees in China by 2015 is expected to more than double from the 13,000 this year.

Over the same period, the company plans to boost its authorized dealerships to 680 from the current 480.