An incredible new arrival in my ever expanding Chinese tin toy collection. “I will once start a museum”, I always tell the wife. Sure I will not!, these beauties are mine alone… This is the ME801 Lunar Explorer, a completely imagined moon exploration vehicle with dangerous bright orange grappling arms.

The upper part of the body is made from tin, the lower part is made of plastic. There is a cabin on top with a very small pink astronaut that loox suspiciously alien. The ME801 is 24 centimeters long and that makes is a medium-sized Chinese tin toy. It works on batteries and when switches on the explorer moves forward, the arms start crawling, the cabin circles around and the red search-light in front lights up. It has stop-‘n-go action so when it hits something it automatically turns away. 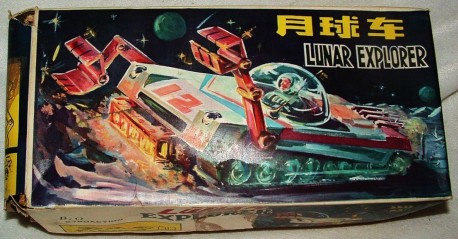 Box-art is brilliant. This is the front. Drawing of the Lunar Explorer in action on the unknown surface of the moon, left-arm seems to grab planet earth in the background. This space toy was made in China in the late 1960’s or early 1970’s. As  usual there is now brand-name but all tin toys with ‘ME’ or ‘MF’ in their suffix were made by the ‘Shanghai Toy Factory’ in the great city of Shanghai.

I found this example in a toy store in the US. China didn’t export these tin toys to the Americas in the ’60 or ’70 but China did export a lot to Europe. Not only to Communist Eastern Europe but also to Italy and Spain where I still find many fine Chinese tin toys. Maybe this ME801 went to the US with an American tourist, likely via the moon. 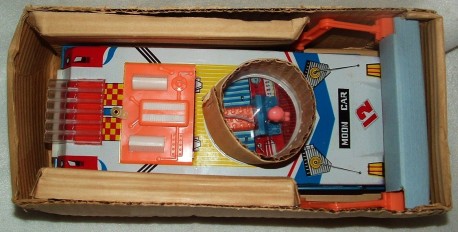 ME801 safe in its box. It has written ‘Moon Car’ and the number ’12’ on the bonnet. Sure I would rather like to put it on one of my bookshelves but they are all full. My wife will go out drinking tomorrow, I guess she won’t notice some of her books are gone when she comes back…