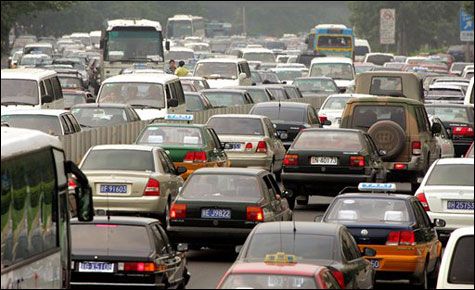 The Chinese capital is likely to adopt new vehicle emission permits which could be as strict as those in Europe, in response to concerns over the city’s air pollution.

The Beijing Municipal Environmental Protection Bureau has released a draft of new standard which specifies strict limits for a variety of vehicle emissions, including carbon monoxide, hydrocarbons, nitric oxide and particulate matter.

If adopted, the “Beijing V emission standard” could help reduce the emission of nitric oxide by 25 percent, which is considered as a main cause of tiny pollution particles in the air of 2.5 micrometers or less in diameter, known as PM2.5.

The proposed Beijing standard will be stricter than national standards used at present.

Public opinions on the draft will be solicited until April 9, and the regulation is expected to be implemented within the year.

The State Council, or China’s cabinet, passed a new air quality standard that includes PM2.5 on February 29. The standard will be implemented in major cities in 2012 and 2013 before covering the whole country starting in 2016.

Beijing led other cities nationwide in releasing PM2.5 readings in January following public outcry over the inaccuracy of PM10 readings. Fine particles of 2.5 microns or less are believed to pose greater health risks than larger particles.