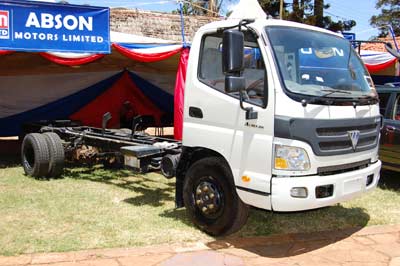 Chinese automaker Foton Motor group has opened an assembly plant in Nairobi in a bid to explore the market in Kenya and East Africa.

The plant, which cost $50 million, was officially opened Monday by Prime Minister Raila Odinga and a visiting Chinese delegation led by Liu Qi, a member of the Political Bureau of the Communist Party of China Central Committee.

At the opening ceremony, Odinga said Kenya had to embrace manufacturing as a means of restoring and strengthening the middle class.

Odinga said a strong middle class is critical to Kenya’s growth and stability. He urged manufacturers to produce cheaper cars that would enable more Kenyans to afford new vehicles.

Liu said at the opening ceremony that China was exploring other areas of cooperation with Kenya, saying there was high potential in tourism to increase the number of Chinese visitors to the East African nation.

Second-hand vehicles command a large share of the market in Kenya, and 70 percent of the market share in East Africa. Analysts believe Chinese investment in the field could help change the situation.

The assembly plant will make Foton Motor company more competitive because it will avoid paying a 25-percent duty on fully built imported units.

The plant was expected to serve the rapidly growing market for pickups and light commercial vehicles in East Africa. It can supply at least 10,000 units to the region.

Analysts here say that by setting up the first Foton assembly plant in Kenya, the company has shown tremendous confidence in the economy of the country.

The company is currently in the process of recruiting dealers across East Africa. Consumer trends here indicate that buyers go for vehicles that they know they can buy spare parts at the nearest town.

Odinga said the emerging competition in the motor vehicle assembly industry in Kenya was a sign of good times ahead with the coming of the East Africa Common market.

“In the past, the fragmented economies of the East African countries discouraged the auto dealers from setting up assembly plants. The common market has made it possible for the dealers to capture to plan for this market of more than 130 million people,” he said.

“It is a new era of competition. And competition is always good news for the consumer. For Kenya, this is just but the beginning,” he noted.