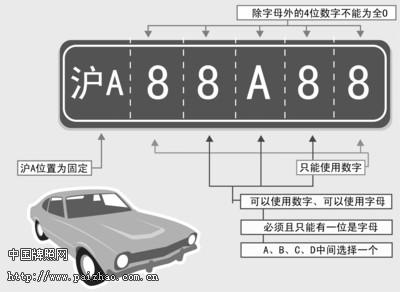 Getting a car license plate in Shanghai costs almost as much as buying an economy family car, and industry insiders predict prices will continue to rise.

The cost of the plate is roughly the same as the cost of a Yaris, one of Toyota best-selling family cars.

Winning bids in January’s auction were about 53,195 yuan, a sum that has climbed throughout the year, with the exception of a slight drop in June and July.

A strong demand among urbanites to own a car, and government regulations to ease traffic congestion, are believed to be the two main drivers pushing up the price of the license plates.

“It’s by far the most effective congestion charge,” said Feng Shiming, an automobile market analyst, as he compared traffic jams in Shanghai with other Chinese cites such as Guangzhou and Beijing.

“To ease the problem of the growing number of vehicles on the roads and the limited traveling space through price restrictions may sound unfair, but it’s better than the (lottery) system in Beijing, and has been proved effective,” Feng said.

Residents in Shanghai spend an average of 47 minutes commuting to work, according to the Chinese Academy of Sciences’ latest China Urbanization Report.

The time is one minute less than Guangzhou and five minutes less than Beijing.

Shanghai was the first city to introduce an auction to control plate supply, while in Beijing car plates are distributed through a lottery system. Guangzhou introduced a system similar to Shanghai’s earlier this year.

The car plate quota in December was 9,300, the lowest in six months, while the Shanghai Urban Construction and Communications Commission said it plans to further reduce the annual quota of car plates to below 100,000 because of the “limited traffic space downtown”, convincing many that the price of car plates will continue to rise.

“Buying a car is just a matter of sooner or later,” said Jiang Weichang, 60, who recently retired from a Shanghai factory. “Since the price keeps going up, it’s better now than later.”

Having just invested 100,000 yuan in a brand new Buick, he said he is trying to decide between a Shanghai car plate and one from a neighboring province, which could save him tens of thousands of yuan.

“I bought a new car mainly to take my wife and parents for short trips, as I have lots of time after retirement,” said Jiang, who said the regulation banning car plates registered outside Shanghai on highways during rush hours will have little effect on him.

A survey by Mercer Consulting, the world’s largest human resource consulting firm based in New York, found that in 2012 Shanghai topped all Chinese mainland cities in salary growth rate — 9.1 percent — while the automobile industry, among other sectors, achieved the biggest salary jump — 9.7 percent.

Jiefang Daily reported that Mercer attributed the increase to the “full-speed development” and “brisk sales” of the domestic automobile market.