How much Exactly is the Landwind X7 a Clone of the Range Rover Evoque? 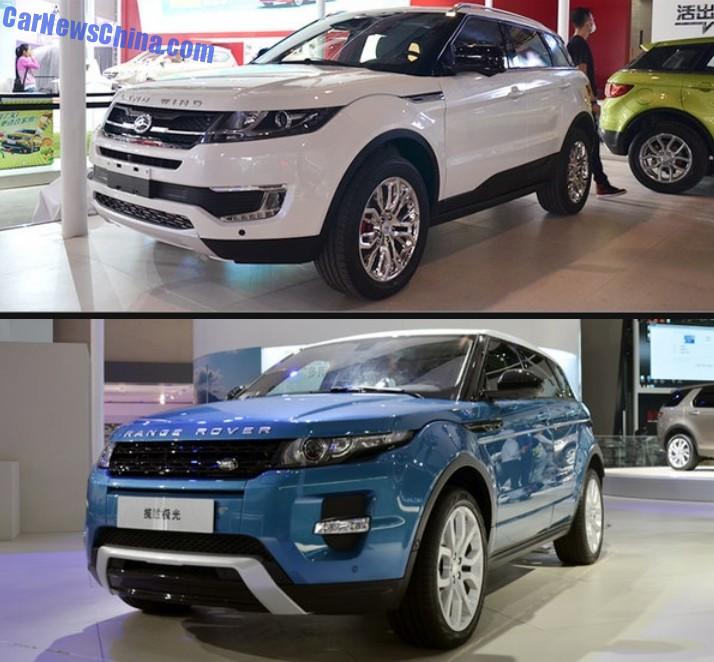 The infamous Landwind X7 is a Chinese clone of the British-Indian Range Rover Evoque. But how much a clone exactly? We have shown comparisons inside and out, but some Chinese media are taking making comparisons to a whole new level, proving the X7 is indeed a pretty good clone, but not a perfect one. Let’s begin: 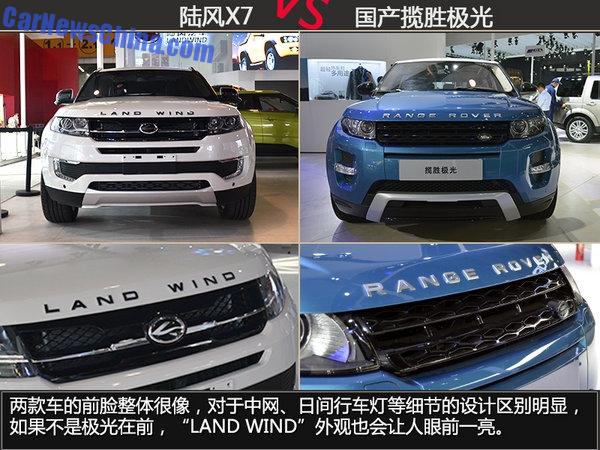 Overall design is very similar up to the lettering, but the X7 has a chrome strip over the grille and the Evoque has not. 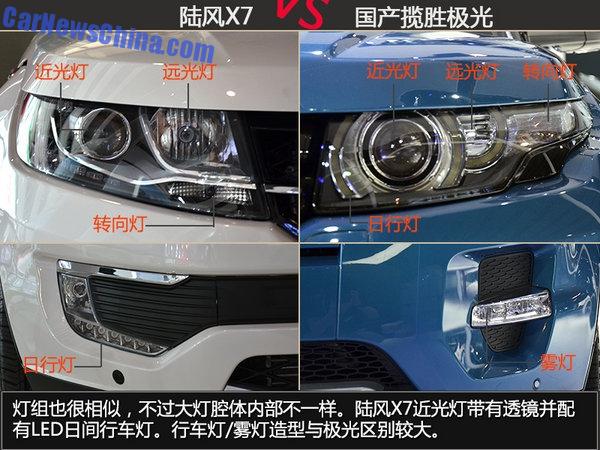 Price of the X7 will start around 120.000 yuan or $19.600. The X7 is powered by a Mitsubishi-sourced 2.0 liter turbocharged four-cylinder petrol engine with 190hp and 250nm, mated to a six-speed manual or an eight-speed automatic. The X7 is based on a shortened variant of the platform that also underpins the Landwind X8. 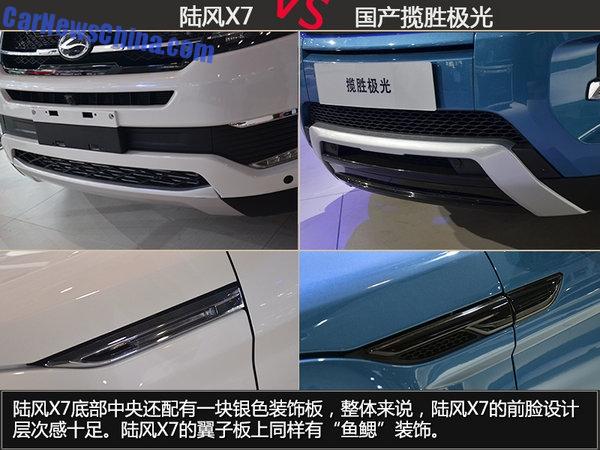 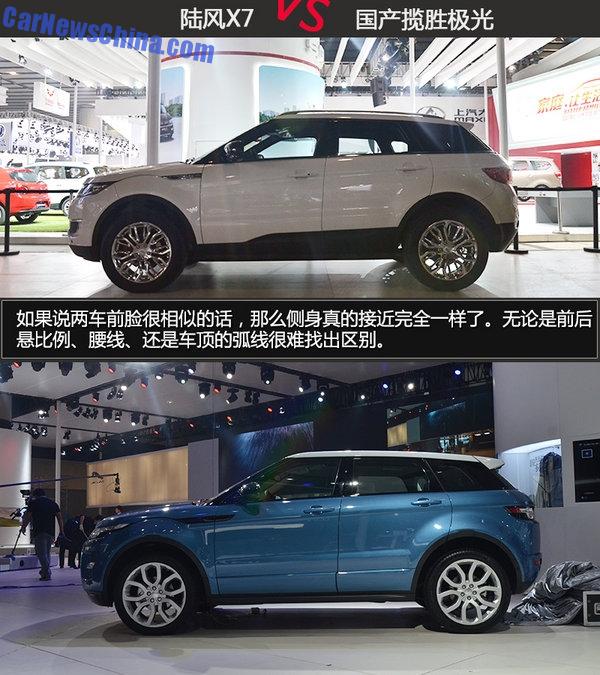 1) The X7 has a chrome strip running under windows. The Evoque does not. 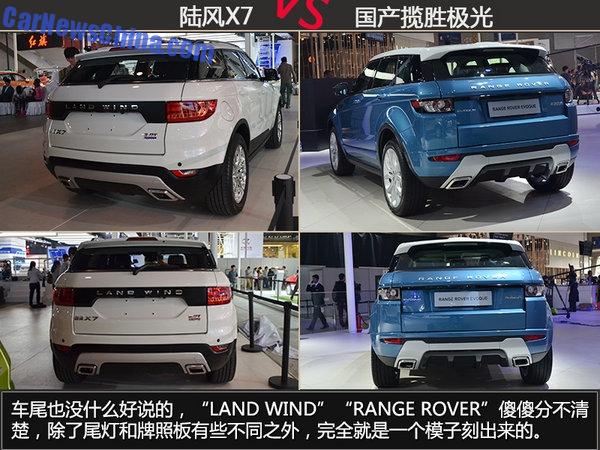 That’s great cloning work there! Bumper almost 100% and rear window at least 90%. Lettering the same again. But! Landwind has a rear-windshield wiper and the Range Rover does not. 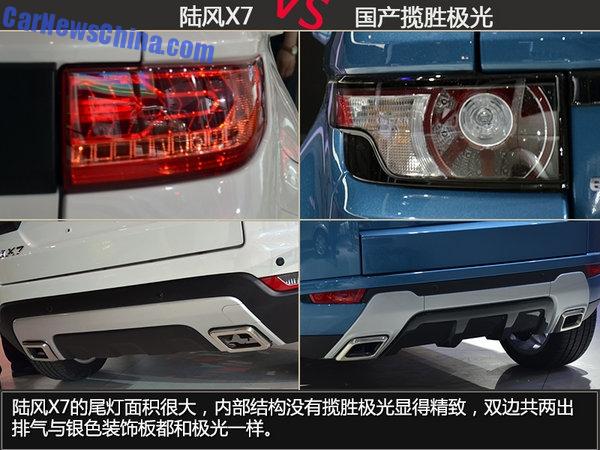 Rear lights are rather different.

The Landwind X7 is one of our hottest stories of the year, occupying three places in our 2014 top ten, and it is already late November. The X7 just fascinates, and normals rules apparently don’t apply. Whenever we had a story about a Chinese clone or copy before the reactions would be largely negative, accusing China of all wrong in the word, and the automaker in question was vilified.

In the case of the Landwind X7 however the reactions, comments, and emails are largely positive. Many are saying Land Rover only has itself to blame because it charges far too much for the Evoque. And many more are saying the X7 is a much better looking car than the Evoque. And we have received numerous emails from all over the world asking when the X7 will be available in country X or Y. Are you reading this, Landwind..? 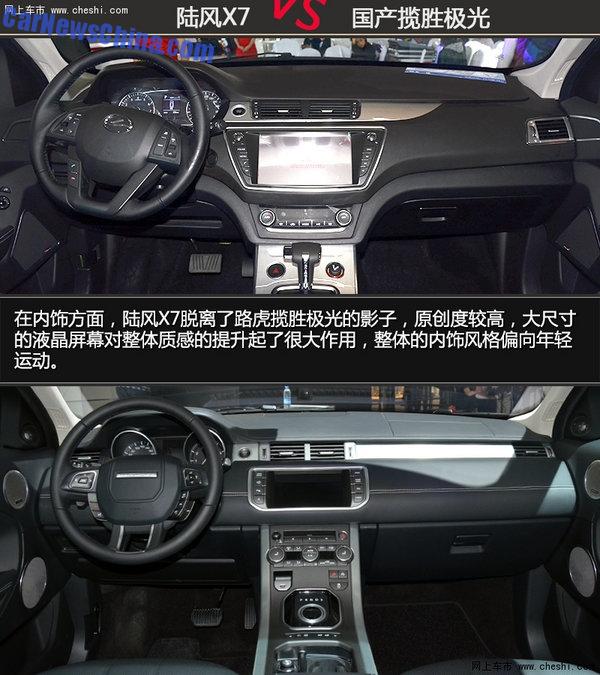 Overall design very similar again. Check start buttons! Screen in the X7 is much bigger than in the Evoque. X7 has a clearly marked cigarette lighter, the Evoque does not. The X7 has gear lever whereas the Evoque has a trendy knob. 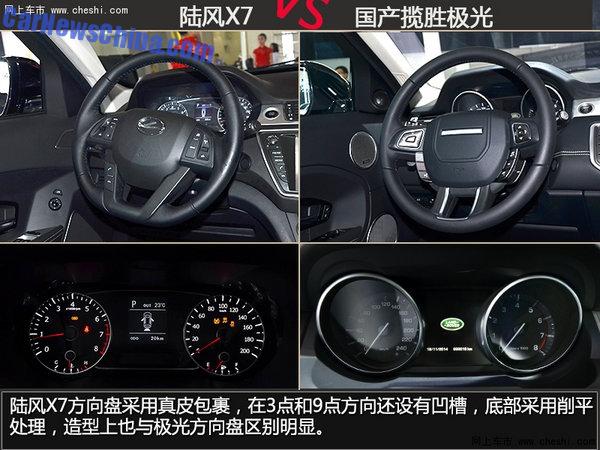 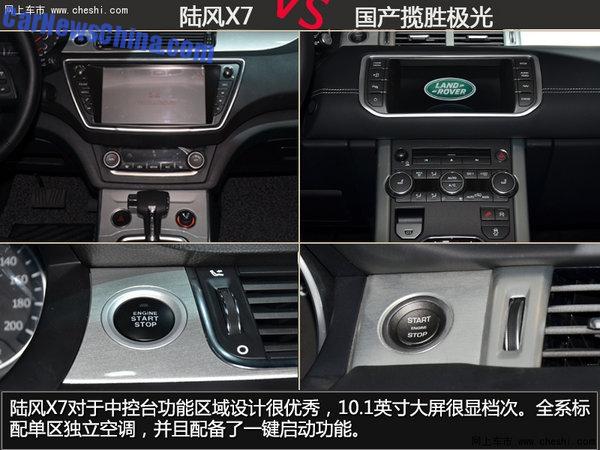 The X7 has icons for air-the vent-control, so drivers know what is how and where. The Evoque does not, so drivers have to find out in their own way, and considering that most buyers of the Evoque are women; the hard way. 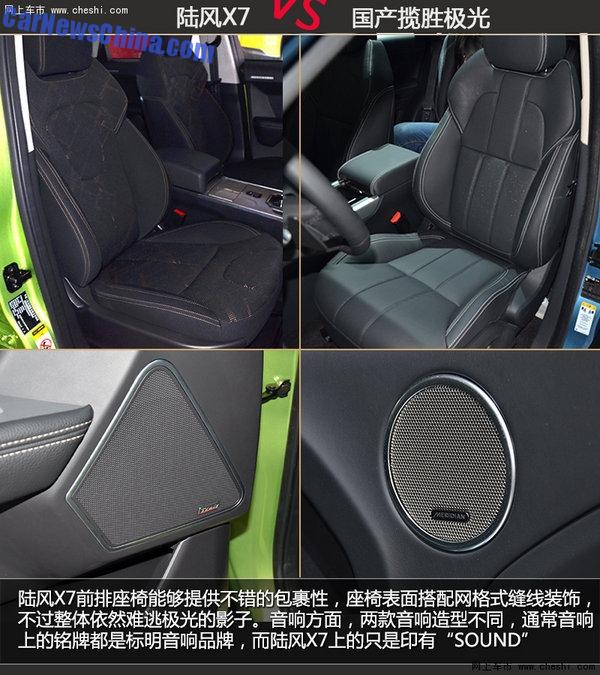 The seat design is cloned as well! We hadn’t even noticed that one yet. Never seen a clones seat before, not even on an other Chinese car. A first for Landwind. Shape of the speakers however couldn’t be more different, and one could even say the Landwind designers got creative, with a kinda wuzzy rectangular shape. 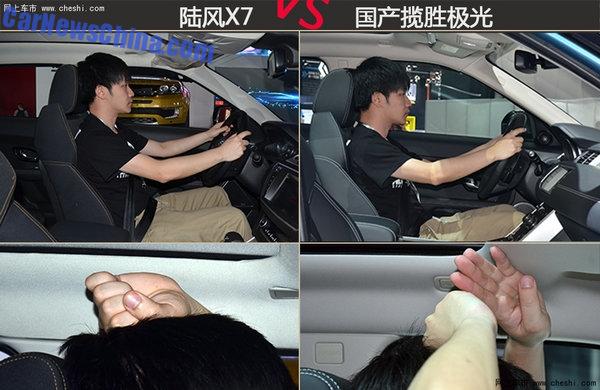 More head space in the Evoque. 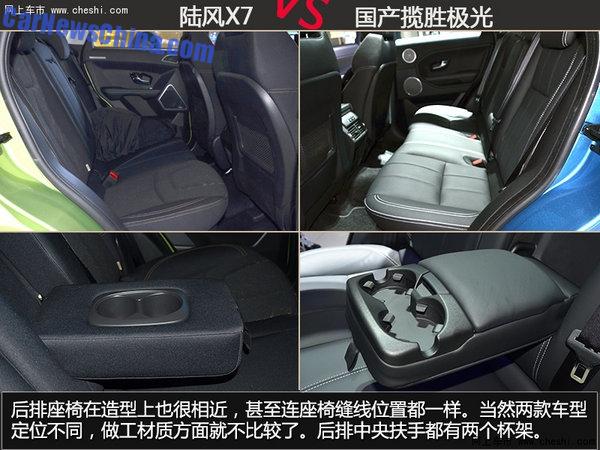 Design of the back of the front seats is carefully cloned again. Cup holders in X7 look very crappy. 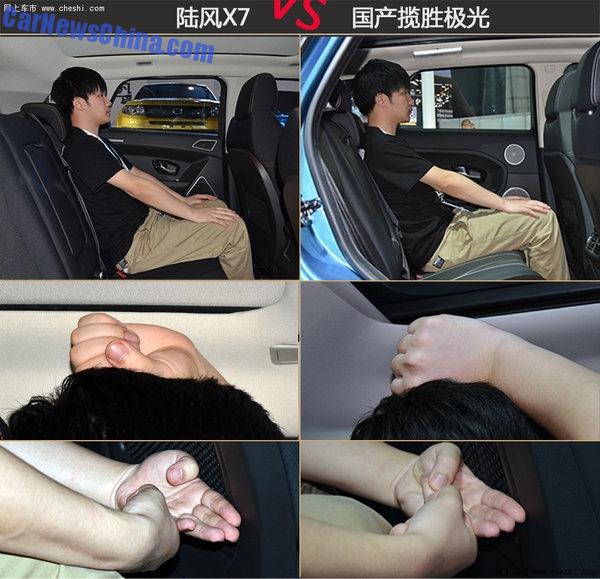 Similar space for the head and the legs. 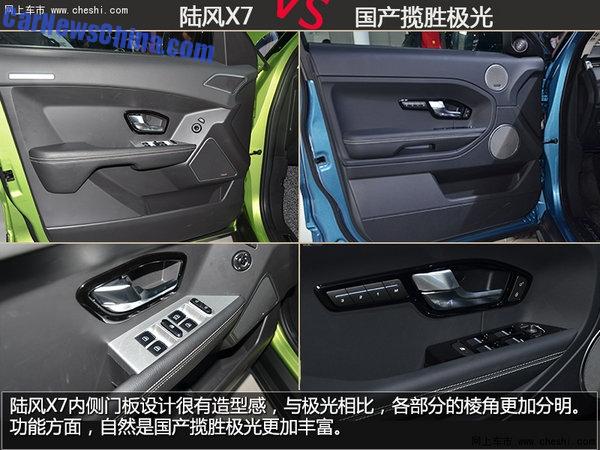 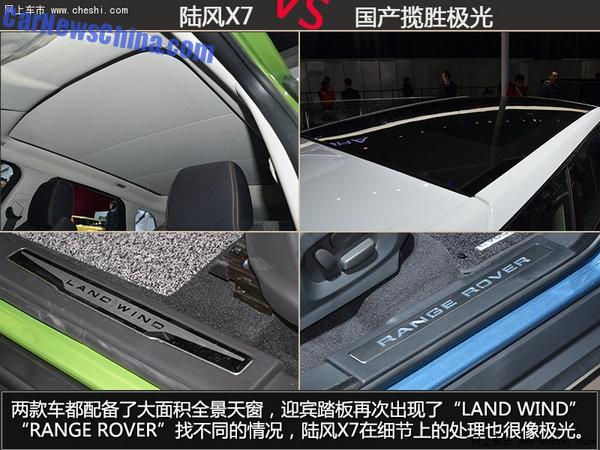 Big sunroofs are for everybody. 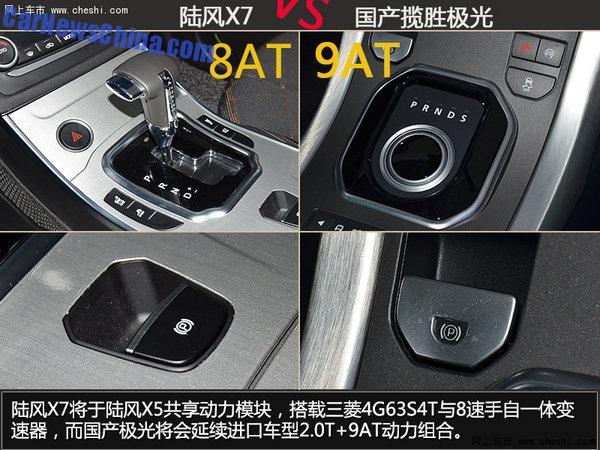 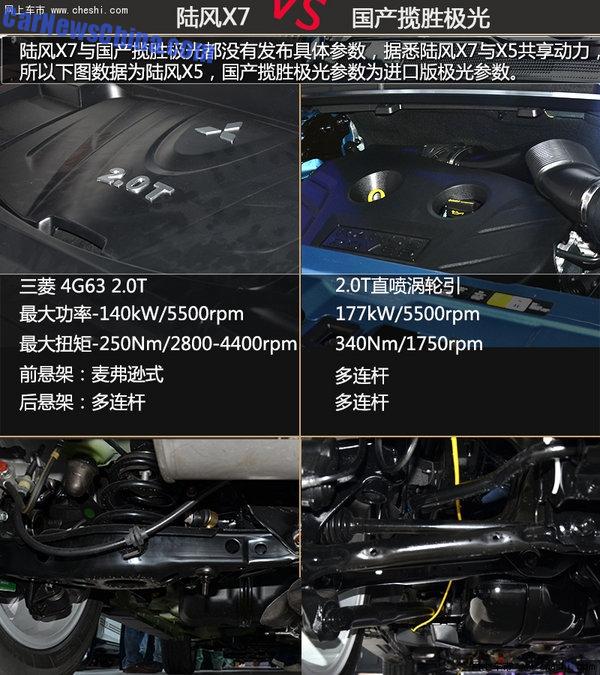