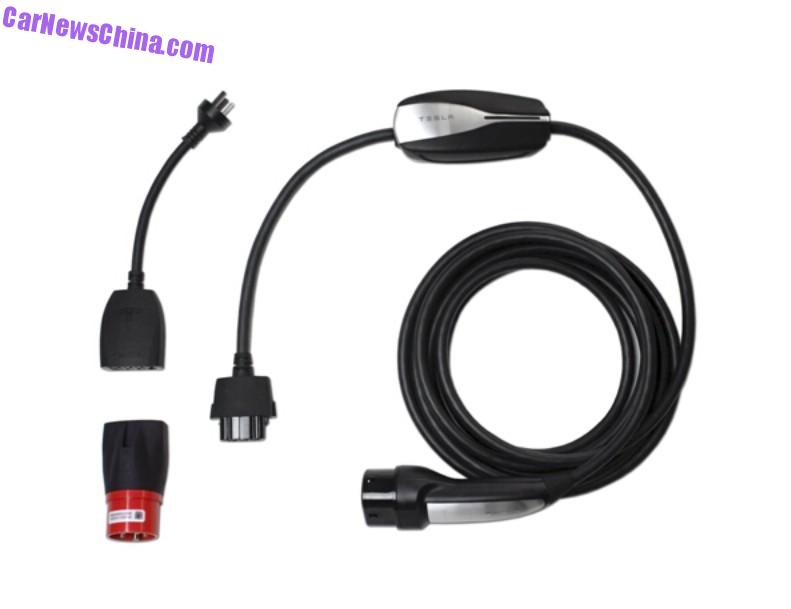 Tesla China has issued a press release, announcing every Tesla Model S in China will be equipped with a new ‘Universal Mobile Charger’ for free. Tesla says the charger is developed especially for China, and that it is part of a new effort to adjust Tesla products to the local Chinese market.

The set is meant to enable Tesla drivers to charge their Model S everywhere in country in case of emergencies, including in shopping malls and hotels. Tesla says it wants to alleviate the “charging worry” (充电无忧) among current and potential-future Tesla owners. The set will become available this summer, it will be standard on new cars and free for current owners.

[comment] Tesla is China trying whatever it can to take away range anxiety; the fear of getting stranded without juice in a country with a chronic lack of Superchargers and lack of service centers. The set might help a bit, but it does not appear to be a very new thing. It basically consists of the Mobile Connector set, already standard in China, plus an extra-heavy red adapter, which is described as suitable for charging via “industrial outlets”, indicating it comes with some kind of a safety feature. The main goal of the set is probably to prevents stunts like this from getting out of hand. How useful and new it all is is thus up for debate, but it does indeed show Tesla is starting to take the oddities of China a bit more serious. [/comment]