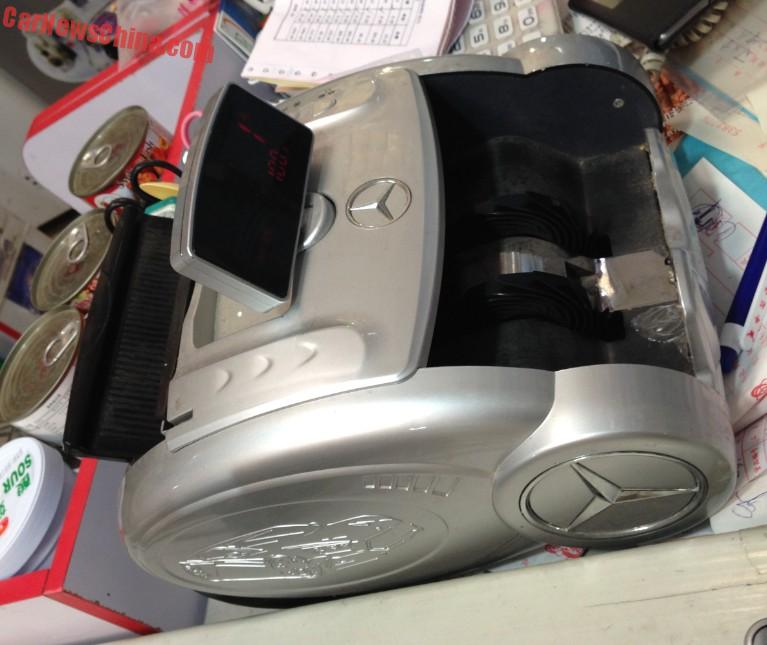 A flashy automatic money counter, Spotted in China in a food market in Beijing. The counter is made extra pretty by the three-pointed Mercedes-Benz star and an image of a supercar on the side. The good machine is called the ‘Puxin A9 Benz-style money counter & fraud detector’. The characters for Benz, 奔驰, are the same as in the Chinese name for ‘Mercedes-Benz’.

The machine can count bills and detect fake bills. It has a working speed of 900 bills per minute, made possible by nine separate rotors at the back. Its LED display can turn 270 degrees. It weighs 6.5 kilo and works on 220V. The official factory designation is JBY-D-A9 (C). Price for all this pretty is a steep 1650 yuan ($265), but I also found much cheaper examples in mistier stores.

The supercar seems to be a Zenvo ST-1, not for sale in China yet, but if it does it sure will cost a lot of money, which will need to be counted with speed an precision. The Puxin A9 Benz-style money counter & fraud detector is able to do just that.