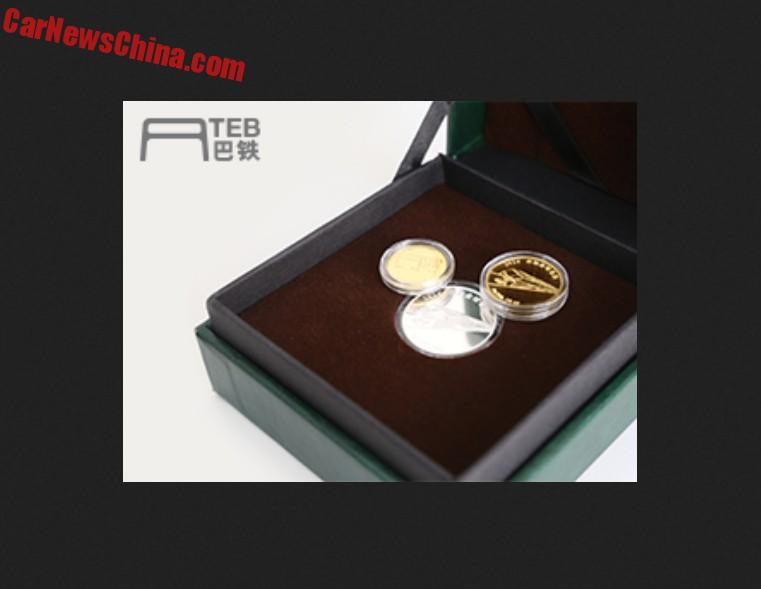 TebTech, the company behind the controversial straddling bus, has found a new way to earn a bit of extra cash;  they have opened a web shop selling commemorative gold coins, commemorating the test with the TEB-1 straddling bus. The company claims the coins have a “high investment and collection value”.

There are two gold coins available: weighing 7.76 gram and 3.11 gram respectively. A larger silver coin weights 10 gram. The coins are imprinted with picture of the straddling bus on one side and the company’s logo on the other side.

Selling this kind of coins is not unusual in China, companies and the government do it all the time, and a lot people do indeed buy these coins as an investment, either for their intrinsic value or for their worth as a collectible.

But for a company that has been loudly criticized for financial messiness a coin selling scheme is probably not such a good idea. It just smells a bit wuzzy. What is also strange is that the web shop doesn’t list any prices. Buyers have to fill in a form, then wait for a telephone call, the caller will call the price and the buyers might or might not accept. Very murky. I filled in the form but I haven’t heard from TebTech’s call center yet.

They sell some other stuff too. Item 02 is a die cast scale model measuring, according to the text, 360/102/50… millimeter! That is truly minuscule. The company says the model has a “high collection value”. It might have, but I think it should have been bigger.

Item 03 is a set of commemorative postal stamps. Real stamps to put on letters. Who is still writing letters..? This kind of stamps is very common in China too, companies and government issue them all the time. China’s state owned postal company, China Post, basically approves every request as long as you pay. The set comes with eight stamps showing the ancient Chinese character for harmony and various parts of the proposed straddling bus infrastructure system. The stamps have a value of 1.20 yuan each, which is enough to send a postcard within China. Again, the company mentions the collection value.

Well then. Let’s hope they sell some and make their bus better. They need, because the latest news indicates things are not going too well. A few highlights:

All valid points indeed, requiring answers and explanations, but the company is selling coins.