The Cars Of The Revival2K17 Tuning Show in China 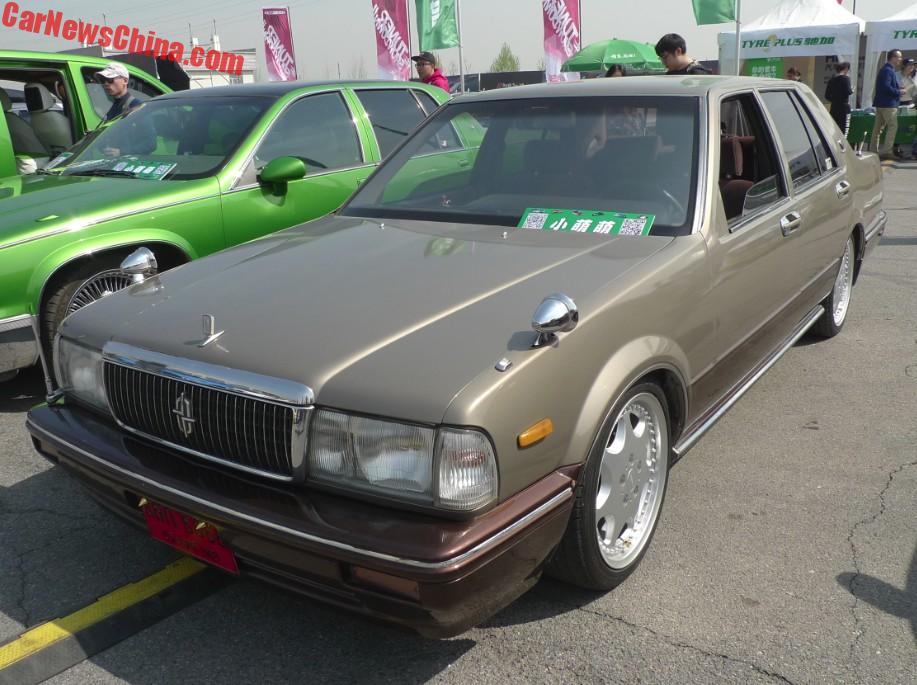 I am a year older again, time thus for the Revival2K17 tuning show on the Goldenport race track, the largest such event in Beijing (2016 edition). It was a great party with hundreds of beautiful cars, good fat food, ultra loud music, and many hyperventilating people. My kind of a good day! We start with a super clean Y31 Nissan Gloria Brougham VIP sedan in beige brown on red Thai license plates. 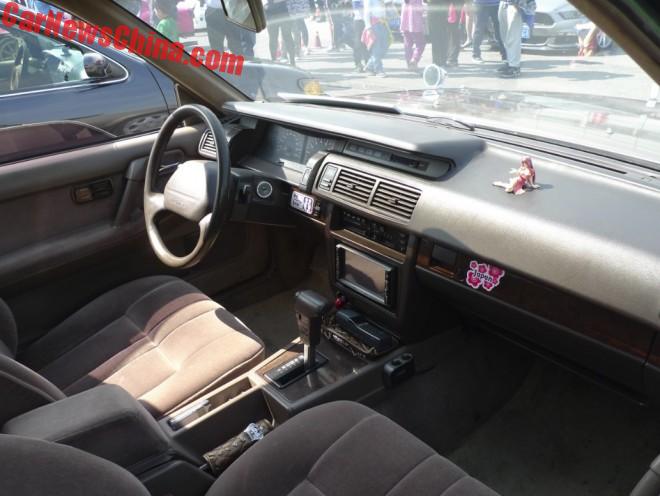 The Y31 8th generation Gloria was made from 1987 until 1991. In most markets it was known as the Y31 7th generation Nissan Cedric. The Gloria was available with various six-cylinder engines. The Brougham VIP mostly came with the 3 liter VG30S V6, good for 146hp and 243nm. 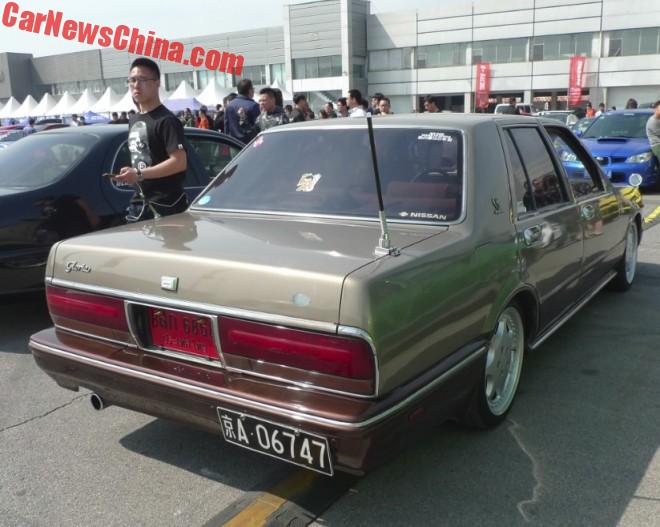 Red Thai license plates are so called ‘trade plates‘, carried by dealer cars, but also by foreign vehicles (yet) without proper permits. Black Chinese license plates were issued to foreign owned companies from the 1980’s to the early 00’s. These companies could buy a car locally, and they were also allowed to import their own cars. 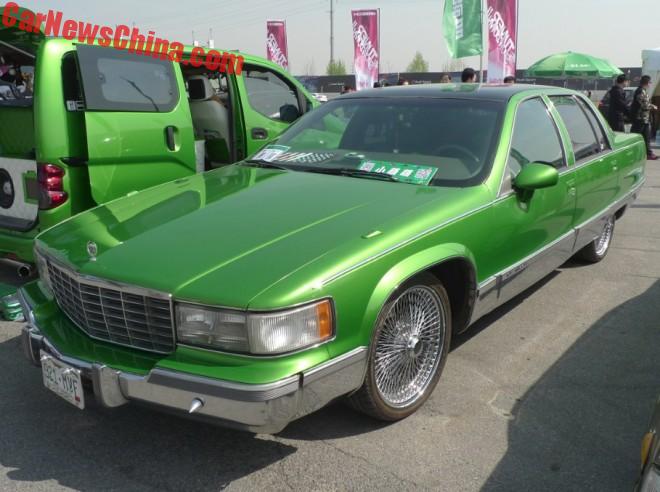 An enormous Cadillac Fleetwood Brougham, painted in shiny green with brilliant looking multispoke alloys and spiked on the bumper. The aerodynamic mirrors are not an after market addition; they are factory period. 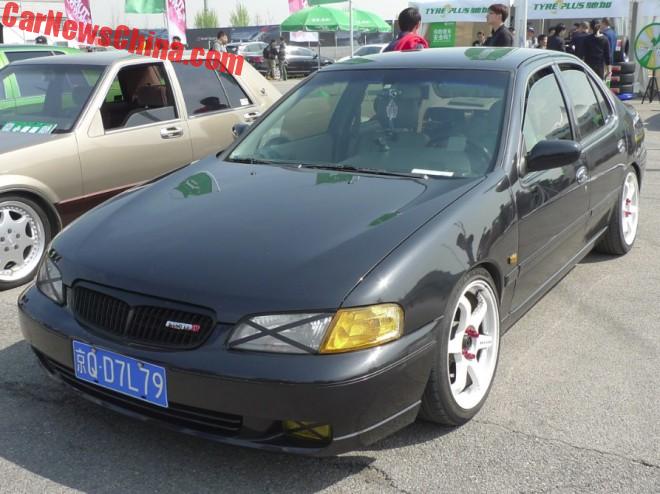 A tasty Fengshen Nissan Bluebird, the first generation Bluebird that was assembled in China. Later on the venture became part of the Dongfeng-Nissan joint venture that still exists today. The old ‘Bird was lowered, fitted with racy tires and wheels, with a black grille, and with a stripped-down interior. 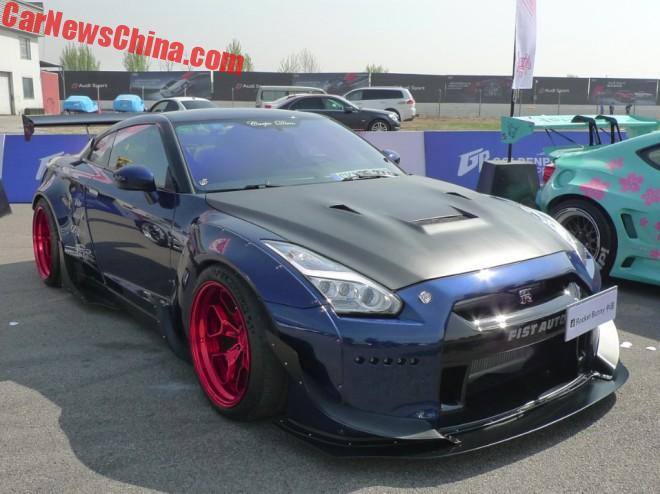 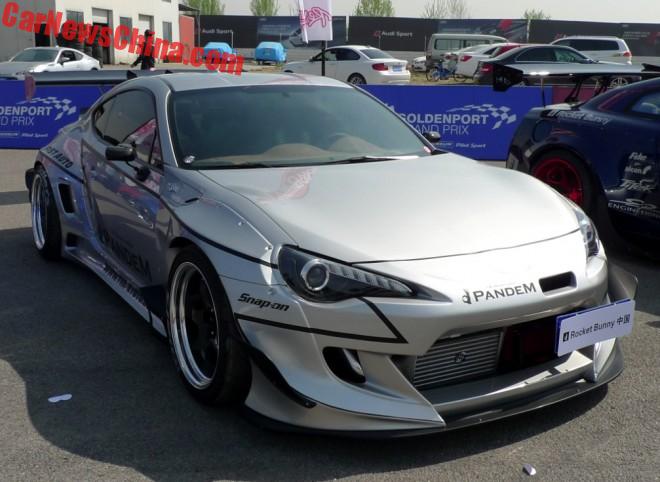 Pandem is another brand under TRA Kyoto. Look at that intercooler! 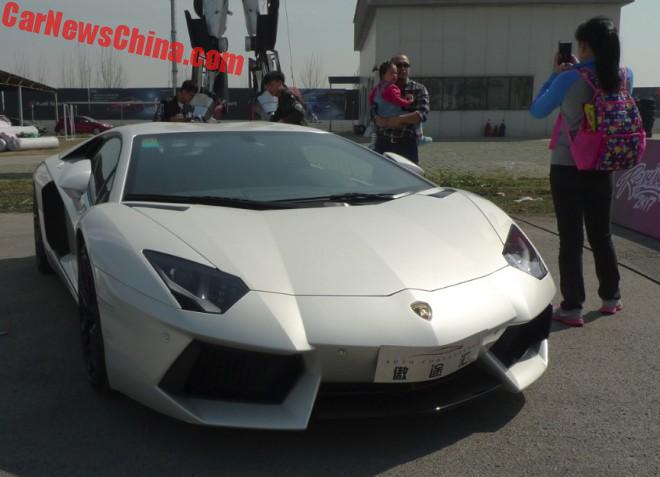 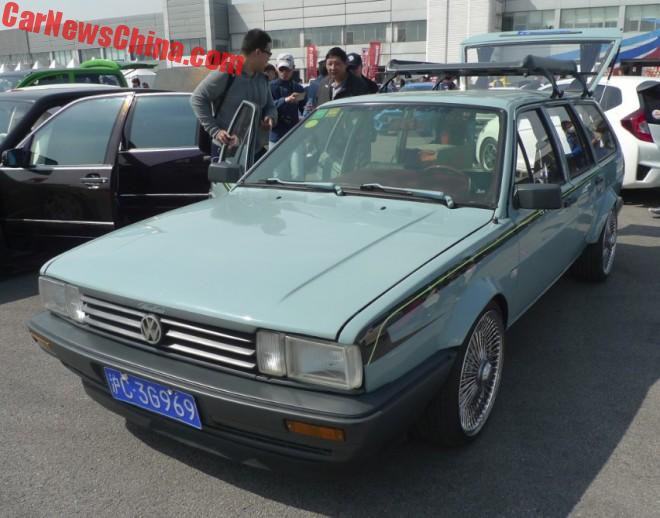 An ultra cool Volkswagen Santana wagon on Shanghai license plates. The Santana wagon has recently become somewhat of a cult car, with lots of clubs and fans. Earlier on we saw another modified example in Beijing. 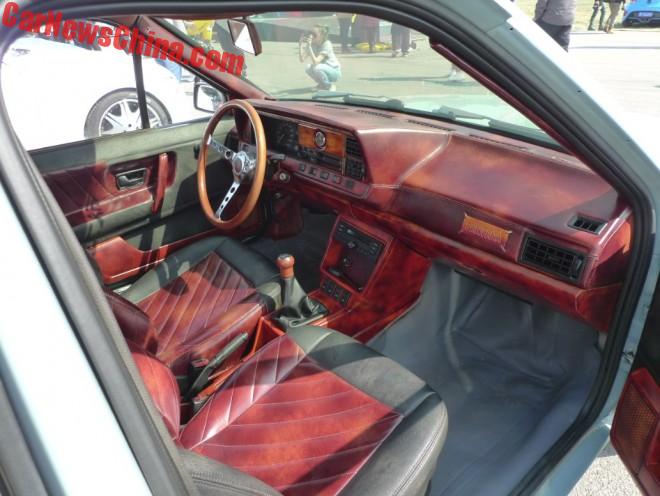 The interior was completely redone with red faux-leather, a large three-spoke steering wheel, and an all-gray floor. Great work! 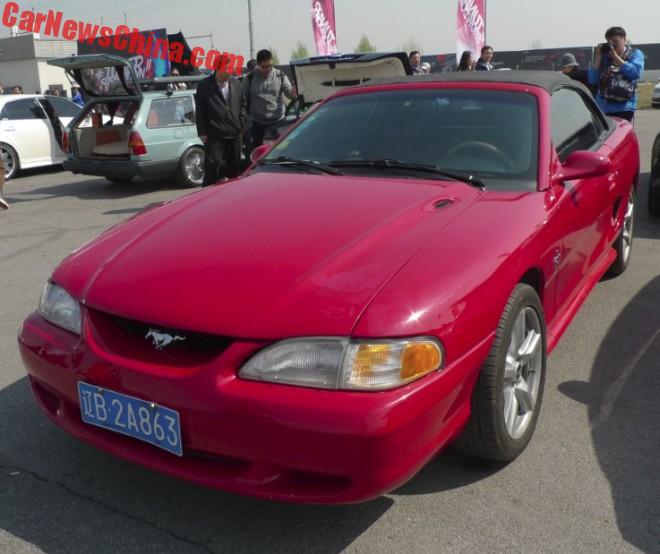 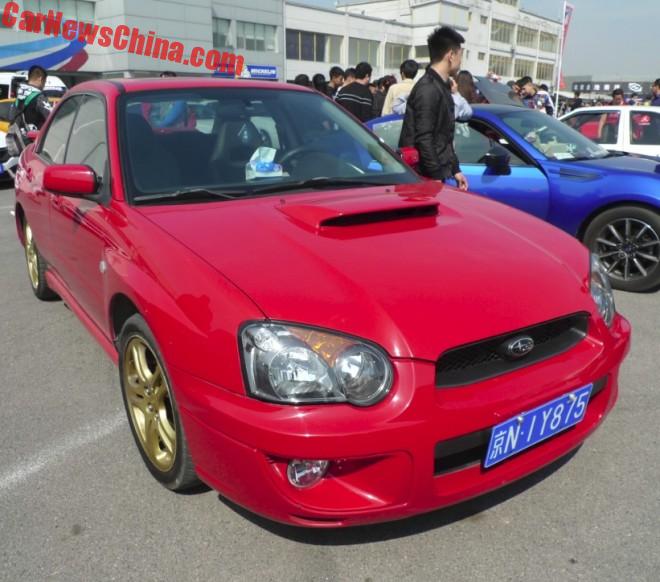 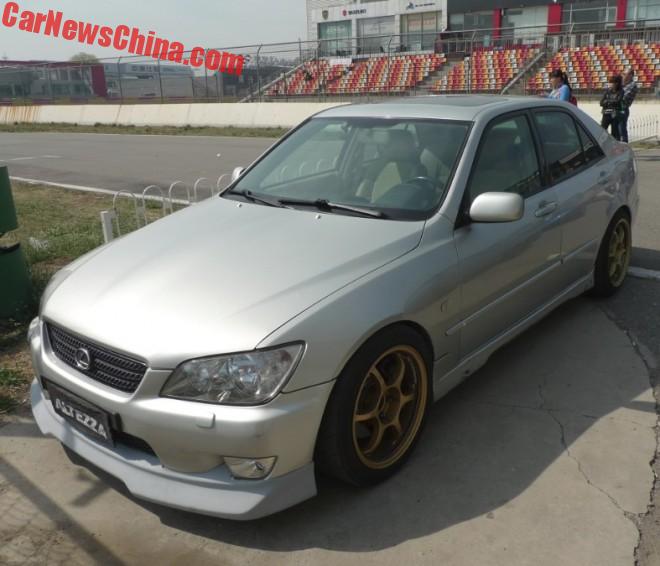 A Lexus IS200 with a period body kit, standing on track ready semi-slicks and fitted with gold alloys. 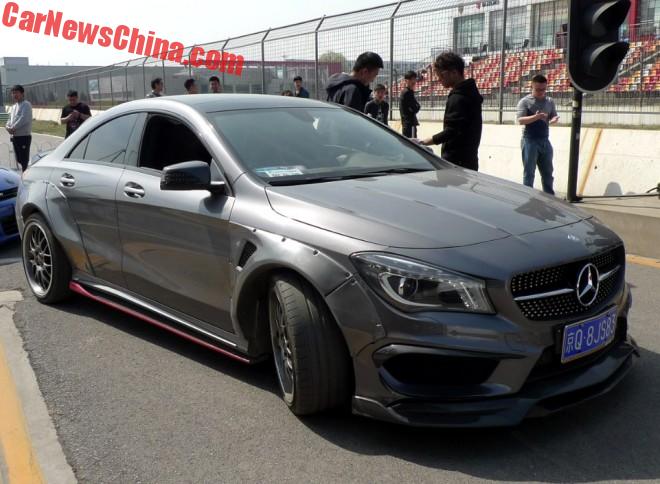 A nasty Mercedes-Benz CLA, in dark gray with a wide -body kit and a very low front lip. The CLA is currently rather popular among in the Chinese tuning scene, and local tuners can tune up the 2.0 turbo AMG engine to over 450 horses. Last year a similar tuned A45 AMG won the sprint race: 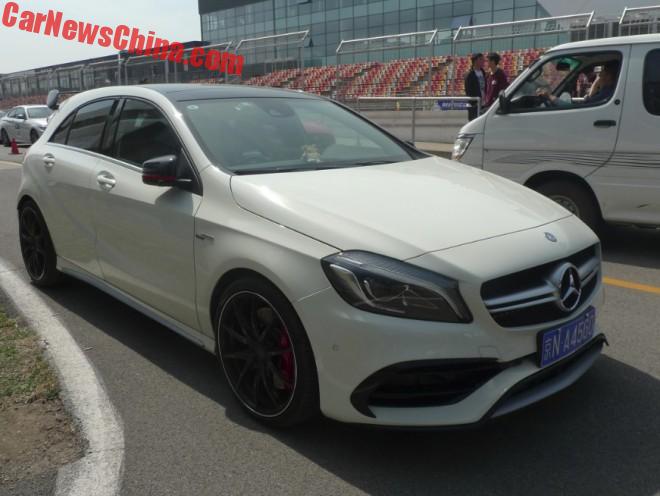 That car was at the show again this year, still fitted with a very subtle body kit, but sadly I didn’t see it race. The sprint races were a bit boring this year anyway. They sprint over half-a-quarter mile, which isn’t much in anyway. Last year they raced one-to-one, but this year one-by-one, which is kinda boring to look at. For safety reasons, they said. 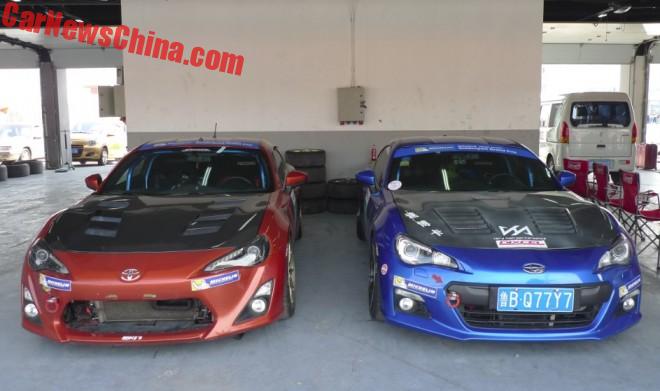 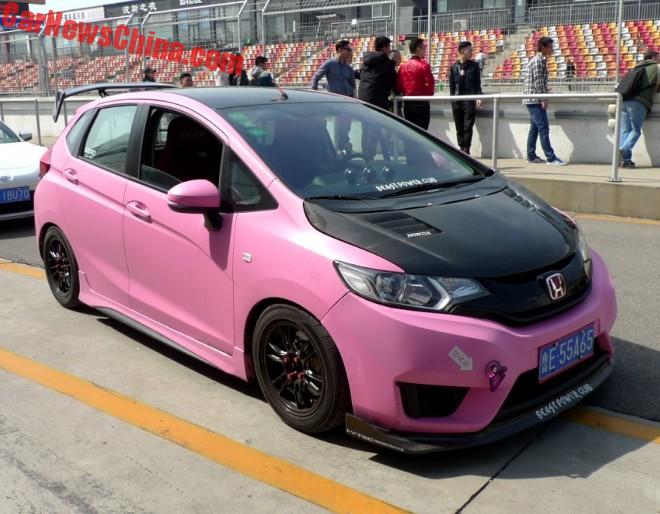 A happy pink Honda on super small racing wheels. It was driven by a girl wearing a pink sweater, and she completely botched up her sprint. The car went from left to right and she missed every gear. It was horrible to look at, but the car looks great. 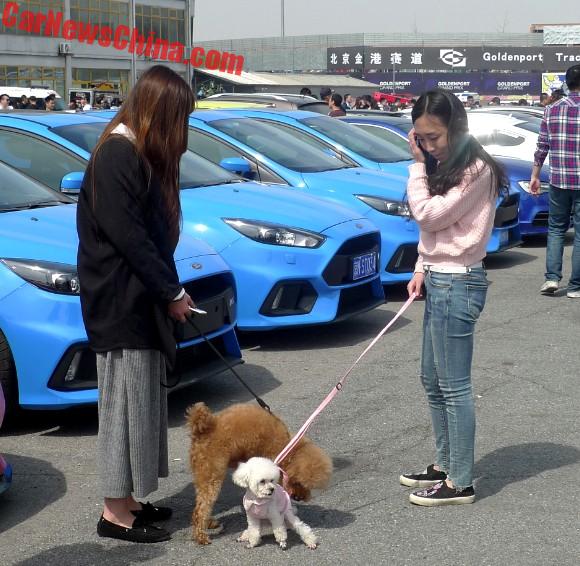 Later on I saw Honda girl again. She was also wearing pink socks and she had a white dog with a pink jacket on and a pink belt. The jacket had a handle on top so she could literally carry it like a handbag. I saw that too but I was too late for a pic. Anyway. Honda girl was talking to a friend with a brown dog. The white dog then looked like it needed a shit. The brown dog took an interest and moved its nose to white dog’s ass. 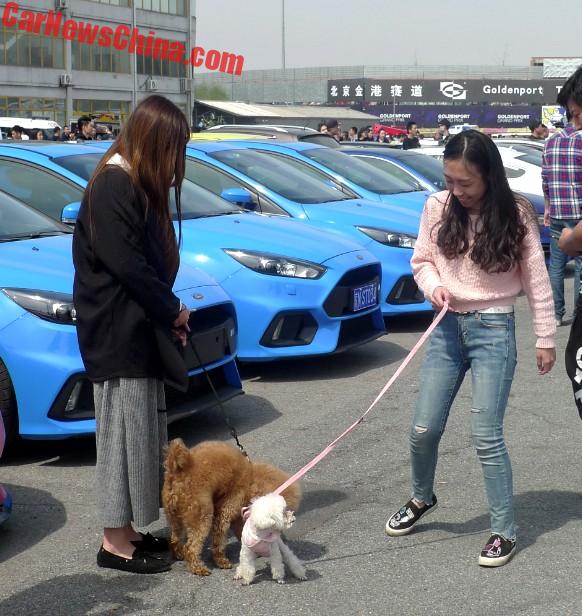 The Honda girl tried to pull the white dog away. Four blue imported Ford Focus STs on the left. 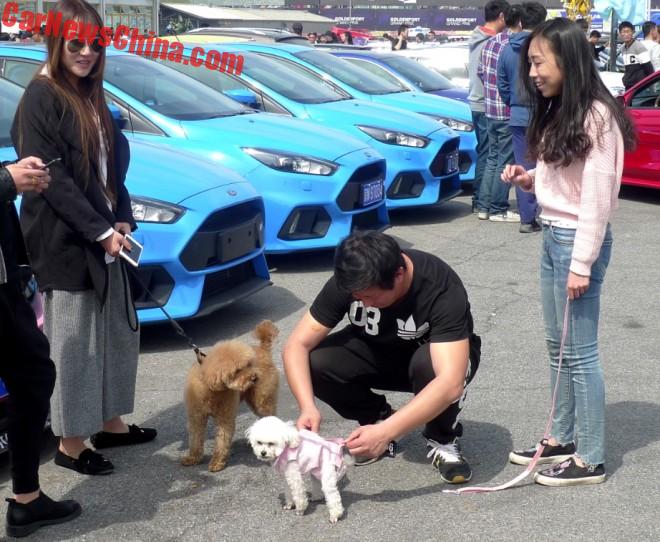 Honda girl’s boyfriend arrived at the scene. It now appeared that white dog could not actually shit because it was wearing that jacket, which covered its ass. Boyfriend took off the belt and opened the jacket at the rear to let the dog shit. That didn’t work. He then proceeded to take off the jacket entirely. 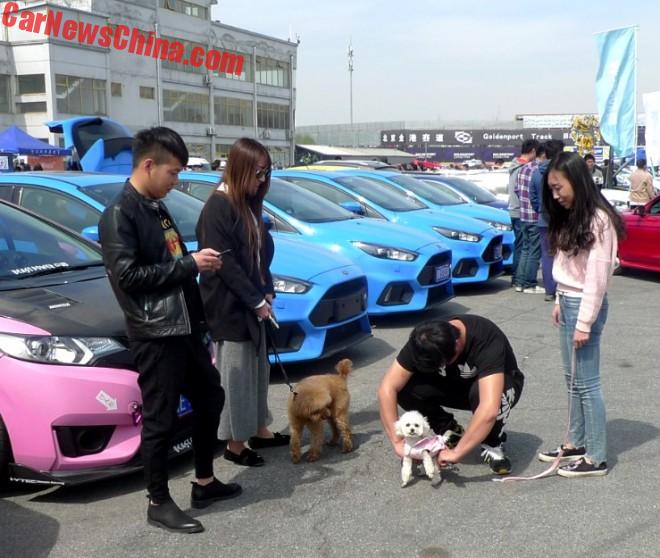 He was fuzzing and wuzzing around with the jacket. Not an easy thing to operate. White dog was cool with it. Boyfriend of friend appeared on the scene. He filmed the boyfriend of Honda girl. In the end he managed to get the jacket totally off but white dog needed no shit no more.