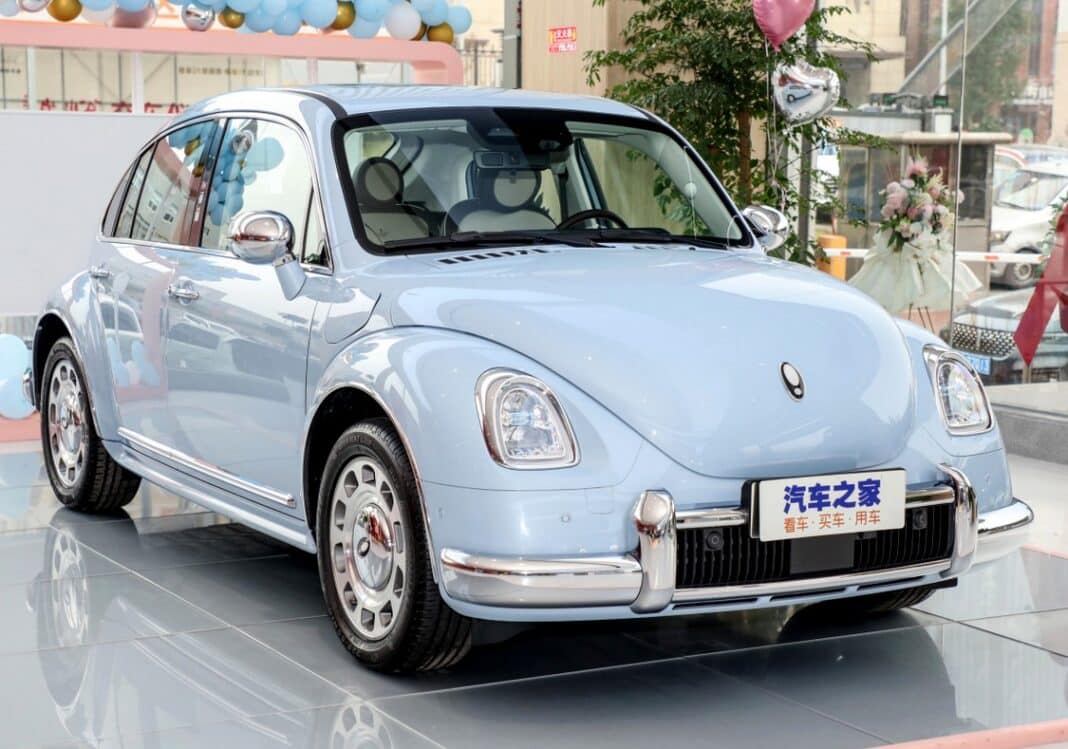 The ORA Ballet Cat has arrived at ORA dealers in China, ahead of its official launch on the Chinese car market later this quarter. The Ballet Cat is a little controversial because it looks somewhat similar to the original Volkswagen Beetle. That may very well be. But the ORA Ballet Cat is better: It is cooler, it more practical with four doors, it is electric, and it is faster.

ORA is an electric car brand under Great Wall Motors. They make several small and compact electric vehicles with ‘Cat’ names, including the ORA Good Cat, the Black Cat, White Cat, and the White Cat Little Wild Cat. The only exception was the ORA iQ, am ugly sedan, but it is no longer shown on ORA’s website, so perhaps Great Wall will move it to one of their other brands. The ORA Ballet Cat is one part of a twin. The other part is called ORA Punk Cat. The Ballet Cat is aimed at the ladies, the Punk Cat at the gentlemen.

Design is ultra cool and very retro, inspired by the Beetle for sure but rather different at the same time, and that is mainly caused by the extra doors. It has pretty wide wheel arches, chrome colored bumpers, chrome door handles and trim, and brilliantly designed alloy wheels.

The door handles are a retro masterpiece. It even has a keyhole!

Oddly, the Ballet Cats stands on 18 inch Goodyear Efficient Grip Performance SUV tires. Perhaps this has to do with the curb weight of the car: 1780 kilo, which is steep for an electric hatchback and may explain the need for a sturdy SUV tire. The Ballet Cat is, however, larger than it seems: 4401/1880/1633, with a 2750 wheelbase.

The rear looks sweet with chrome colored bumpers, lights in chrome frames, and it even has a spoiler. The rear window is large which should be great for visibility.

The Ballet Cat is powered by a single electric motor with 171 hp and 250 Nm. The motor is located at the front, whereas the original Beetle had its engine at the back. Battery capacity is 60.5 kWh, good for a 500 kilometer CLTC range. Energy consumption is 13.9 kWh per 100 kilometer. Top speed is 155 kilometers per hour. ORA will also offer smaller battery packs; 47.78kWh for 380 km CLTC and 49.93 for 401 km CLTC.

The tail gate opens in liftback style, giving easy access to the boot.

The interior mixes retro with modernity. The seats look very classy but the dash may seem a bit busy, with lots of different colors and materials. The twin-screen features a instrument panel and a infotainment cluster. The air vents on the far side of the dashboard are very shiny, large, and vertical.

Coolest feature of the steering wheel is the partial horn ring, which does actually operate the horn. The wheel is also very big.

The drive selector is mounted on the steering column.

Pretty retro-style switches for the air conditioning. The armrest doubles as a wireless charging pad, complete with a thick ‘crystal’ rim.

The Ballet Cat is a five-seat car and the center seats is big enough for an adult. Note the totally flat floor. The headrests are round.

A decent boot space. But it seems ORA was completely out of design inspiration here. Perhaps they all used it for the dashboard. The boot is black and boring without any bling, or anything.

Even the motor compartment looks kind of old school, with all those exposed wires and tubes and tanks.

The ORA Ballet Cat, controversial but better and cooler than the old Beetle.