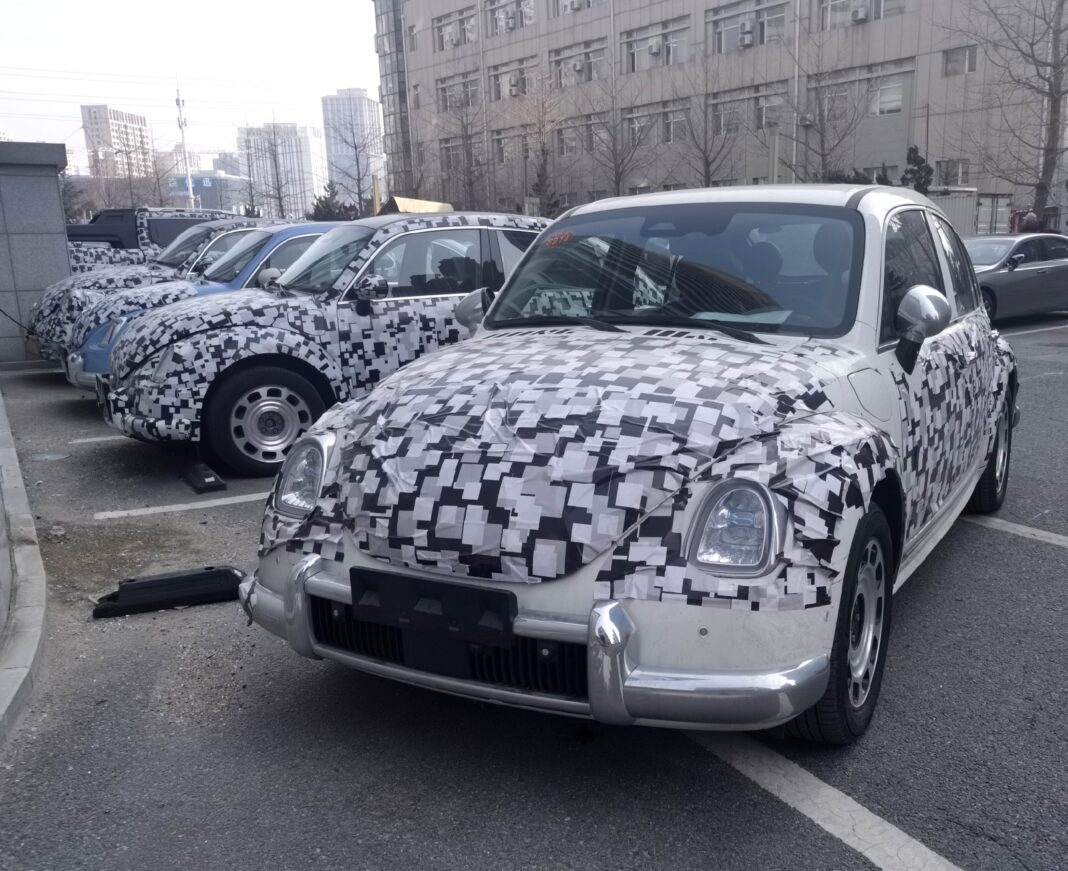 Here we have a whole bunch of ORA Ballet Cat and Punk Cat cars, standing around at a Great Wall facility in northern China. Design of the Cats are very obviously inspired by the original Volkswagen Beetle, albeit with an extra set of doors.

The Ballet Cats are likely very late test cars, as the first early-production cars have already arrived at ORA dealers across China. The Ballet Cat is an electric car, powered by a single electric motor with 171 hp and 250 Nm.

The motor is located at the front, whereas the original Beetle had its engine at the back. Note the charging port on the front fender. Battery capacity is 60.5 kWh, good for a 500 kilometer CLTC range. Energy consumption is 13.9 kWh per 100 kilometer. Top speed is 155 kilometers per hour. ORA will also offer smaller battery packs; 47.78kWh for 380 km CLTC and 49.93 for 401 km CLTC.

The interior is ultra hip with an oval-shaped twin-screen for the instrument panel and the infotainment system.

Ballet Cat on the left, Punk Cat on the right. There is a fuel cap in the rear fender, and the light design is clearly different, although the heavy camouflage makes it hard to see what exactly ORA is cooking up here.

An earlier spy shot of the Punk Cat, clearly showing the fuel cap at the rear and the charging point at the front fender.

Another earlier spy shot, indicating the Punk Cat will keep the round Beetle-style lights of the original concept.

ORA has started a marketing campaign for the Ballet Car. As one may expect, the campaign is heavily focused on females. Not of the ultra hot bikini kind, but more of the pretty-yet-educated sort. A few quotes from ORA, translated from Chinese:

“The cruising range is between 400 kilometers and 500 kilometers, which is enough to meet the daily travel needs of young ladies and sisters”.

“Fashionable and elegant appearance to create a trendy model. It is more eye-catching to meet the treasured girlfriends in the same frame.”

“Oral Ballet Cat makes you fall in love at first sight. Exquisite together with you. ORA loves women cars.”

This one liked her Ballet Cat so much she decided to wear her wedding dress. Alone.

The office lady in jeans.

In a ORA dealer. Girl is an actual customer. The character on the sign is 福, fu, which means good fortune or blessing. The character is mainly associated with Chinese New Year, which was celebrated on February 1. It is the year of the Tiger, according to the Chinese zodiac calendar, but we bet ORA hopes it’ll be the year of the Cat. Or the Beetle.