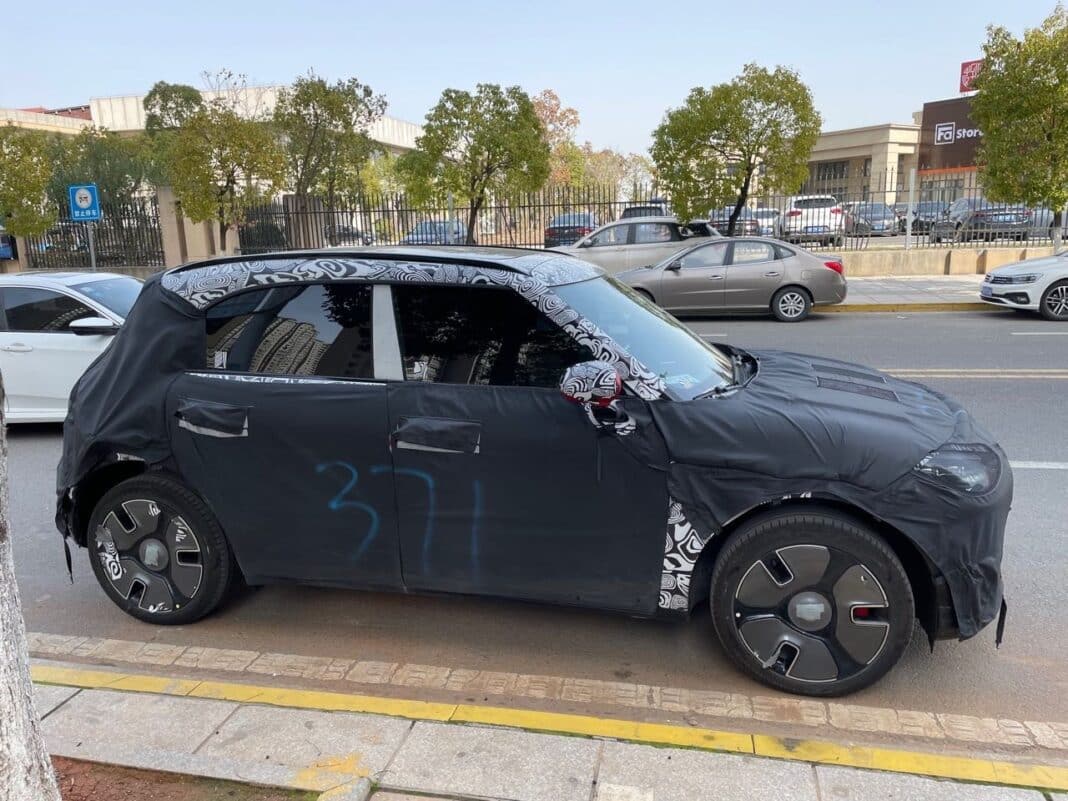 Spy shots of Smart #1 leaked online and we can see the production version of this EV in camouflage. We also got pictures of the Smart #1’s interior.

Smart #1 is the first offspring of the 50:50 joint venture between Geely and Daimler. It was presented at the Munich Motor Show 2021 (IAA) as a concept car. In October last year, Smart #1 patent images leaked. In December 2021, the production version of Smart #1 was firstly spotted in China. Smart published photos of the #1 in February 2022. Now, this vehicle is close to hitting the market. According to Chinese media, a production version of Smart #1 could be unveiled at the Beijing Auto Show. The first deliveries of this EV will start in December 2022. And while the entire world was waiting for this exciting car, it was spotted testing on Chinese roads.

The exterior of Smart #1 is covered in camouflage. Anyway, the similarities between the test car and the early presented teaser images are clear. The testing Smart #1 has the same body shape, headlights, and mirrors.

In addition, the test car has got hip pop-out door handles, just like the vehicle on the teasers. The wheels of Smart #1 are 235/45 R19 with Continental tires. There are aerodynamic elements on the rims.

There is also an interior shot of the Smart #1. It differs from Concept #1 in a few significant ways. The production version got rid of those gold colors. Instead, it got a center tunnel with roomy space. The material of the air vents and central tunnel looks like they are made of aluminum-looking plastic. There are two compartments that can be hidden. The first one has two cup holders, while the second one has a wireless phone charging.

There is an instrument panel screen and the small screen or sensor behind the wheel. The floating touch screen on the center console looks very similar to Concept #1. Its diameter is 12.8 inches. Another difference with the concept is the seats. The production car has leather-look seats, while the concept had fabric ones. The funny detail of the Smart #1 on this image is a red seatbelt. The overall design of Smart #1’s interior looks very simple, with no hard buttons.

Smart #1 is based on Geely’s SEA (Sustainable Experience Architecture) platform, which also underpins the Zeekr 001. Based on these spy shots, the dimensions of this EV’s production version should be around the same size as the Smart #1 Concept. Its length, width, and height are 4290/1910/1698mm with a wheelbase of 2750mm. There isn’t any proven information about this vehicle power train. There are only rumors. According to them, the battery of this EV is 70 kWh with a range of 500 km (NEDC). Smart #1 is said to get one electric motor (RWD) with around 200 kW (272 hp) power. Interestingly, the one-motor RWD version of the Zeekr 001 has got the same power. These two vehicles are both based on the SEA platform, so there is a possibility that this rumor is true.

Where Will Smart Build EVs?

Smart #1 will be assembled in China. We can prove it by the press release from Mercedes-Benz on January 8, 2020. The company said that the future production of Smart vehicles would be in China. According to Reuters, the Smart’s factory will be built in Xi’an, Shaanxi. The annual capacity of this plant will reach 150,000 vehicles.