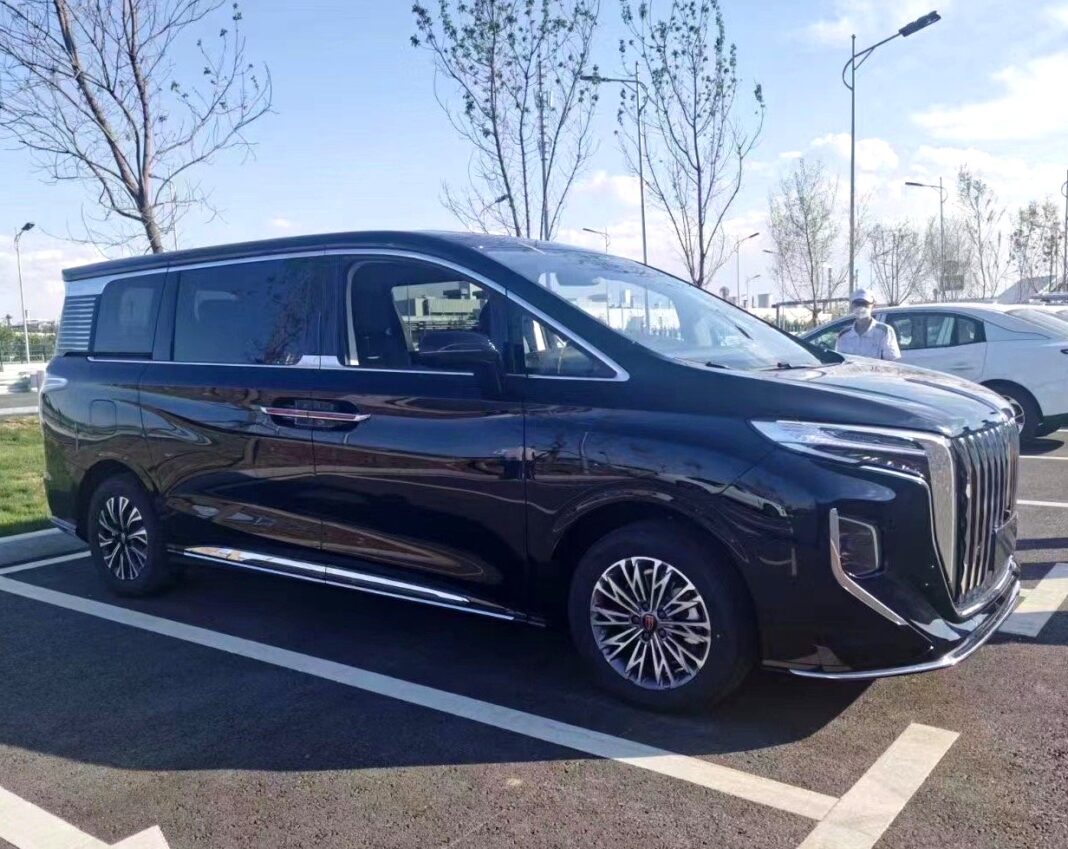 The best photos so far of the upcoming Hongqi HM9 MPV, previously known as the Hongqi Q8. Chinese car makers have an odd tendency to change the names of their cars in the run-up to production. The HM9 is a large seven-seat MPV with sliding doors and a lot of bling. Note the red ornaments on the door handles, referring to the Hongqi (Red Flag) brand.

The most eye catching design aspect is the enormous grille, bling to the absolute max! It has side blades, 12 bars, and a central bar with another red flag ornament, starting on the grille and extending over the hood.

The interior is surprisingly low-tech for a new Chinese luxury car in 2022. The main screen is small and isn’t really integrated in the overall dashboard design. The instrument panel is large enough but it doesn’t really seem to fit in.

The whole interior is indeed a bit disappointing. The materials and level of luxuries aren’t on the same level as we have seen on other recently launched Hongqi cars. The center console has a lot of buttons for a 2022 car, and further houses a large wireless charging pad and the gear lever.

Yes, a gear lever. Unlike many other new Chinese MPVs the Hongqi HM9 is petrol powered. So far, we haven’t seen any electric of hybrid version. Power comes from a new turbocharged 2.0 liter four-cylinder petrol engine with an output of 252 hp, which seems barely enough for such a large and heavy car. Size: 5222/2005/1935, with a 3200 wheelbase and a 2320 kilo curb weight. Hongqi claims a top speed of 200 km/h, which seems rather optimistic.

It seems Hongqi can’t quite decide whether it wants to be a modern EV brand, making pretty and advanced cars like the Hongqi E-HS3, or a more old-school Chinese semi-luxury brands making gas-guzzling monsters like the Hongqi LS7 SUV. Well, more brands are wrestling with this problem. Let’s hope Hongqi finds the right way soon…

The HM9 has a 2+2+3 seat layout. On the second row it has two captain chairs, and there is a bench in the back. The middle seat of the bench seems just wide enough for a kid or a grandmother. So perhaps we should call it a 6.5 seat car.

The rear design is restrained compared to the front. Characters: under the window: 红旗, or Hongqi. On the bottom-left: 中国一汽, Zhongguo YiQi, or China First Auto. First Auto is an abbreviation of First Auto Works. In the past, many Chinese brands added ‘China’ in front of their brand names, but nowadays it is very rare. Hongqi is probably the only brand that still does this on passenger cars, although it is still quite common for commercial vehicle brands.

Another one, this one white, showing the red door handles, the decoration on the D-pillar, and the impossible small wheels: 17 inch standard or 18 inch optional! Better take it easy in the corners.