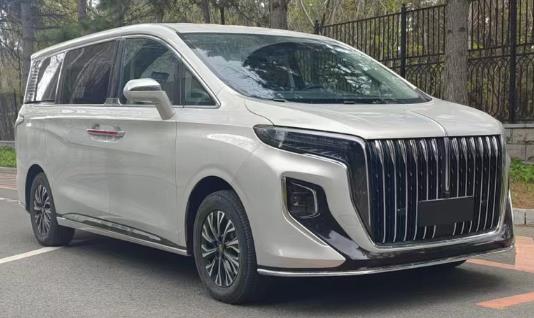 The Hongqi Q8 was revealed in China. Besides naming, it has nothing in common with the Audi Q8. Hongqi meaning ‘Red Flag’ in Chinese, is a subsidiary of First Automotive Works (FAW) and is considered China’s national automotive brand as producers of the L9 state-limousine used by President Xi Jinping. Back to the Hongqi Q8, it is a gigantic luxurious Chinese MPV. So let’s get acquainted with it.

We will crack on with the Hongqi Q8’s appearance. It stays in line with other Hongqi vehicles like the H9 sedan or the LS7 SUV. The Q8 has an enormous grille, known as a ‘spectacular waterfall’. The grille occupies almost all the front end of the MPV. Anyway, there also are huge ‘flying wings’ running lights and the high beams in the front bumper. The Hongqi Q8 also has sliding rear doors with red trim on the door handles.

From the back, we can see a giant taillight unit and a sporty rear spoiler. Unfortunately, MIIT shared shots of poor quality. So the name of this MPV may appear to be ‘Q9’ as well.

The giant Hongqi Q8 is powered by a 2-liter turbocharged engine (CA4GC20TD-35) with 185 kW (252 hp). It is a new generation of this ICE. Its predecessor (CA4GC20TD-32) became popular among many of the vehicles under FAW, including the Hongqi HS5, the Bestune T99, etc. It seems like this engine isn’t powerful enough for the 2.3-ton Q8. As it goes from the announcement, the top speed of the Q8 is 200 km/h. It will be a real challenge for a 2-liter engine to make this MPV reach its top speed.

Previously, we covered the Q8’s interior. It looked almost spartan compared to other MPVs. The Q8 has got wooden trim, a single screen in the center of the dash, and physical buttons.

Previously exposed car from May 2022 batch: